I was never musically inclined. Like at all. Like I can’t play chopsticks on the piano. But I loved LOVED Guitar Hero, and I spent more time than I want to admit playing the game during my college years. While I ended up being pretty good – able to do all but the most difficult songs on the Expert level – it definitely didn’t start out that way.

Rhythmically disinclined me had to start from the beginning, using three fingers and taking on the Beginner songs. Every time I moved up a level, I encountered the same process – it would take a substantial amount of time to even perform the easiest songs well, but after a while, I caught on and mastered the rest fairly easily. I never learned how to play an instrument or how to dance anything more difficult than the Shopping Cart, so being able to feel the music was a foreign concept. Starting a new song or level meant simply reacting to what I was seeing on the screen. But something would inevitably click – I never figured how that worked, but it did – and I would be prepared for what was to come. Then my performance substantially improved.

I imagine professional baseball works similarly. Players learn new skills at each level, and they move up once they are adequately prepared to handle the challenges of the next level. But there’s a certain period of time that it takes to get accustomed to that level where everything speeds up and players go into survival mode. Eventually, they should get used to it – the good ones anyway – and everything will appear to slow down. It can be a lot to take in.

And I suppose catchers have it the worst of any of them. They not only have to learn how to hit at each level, which is enough of a challenge, but they have to learn to handle their responsibilities behind the plate as well. It’s physically taxing. It’s mentally taxing. There’s a ton of preparation, and there’s a ton of information. And it doesn’t get any easier once that player reaches the majors, which is why conventional thinking is that catchers have a really hard time adjusting to the majors. But is that true? And what does it mean for the eventual Blake Swihart Takeover?

Below is a list of “top prospect” catchers (catchers ranked on Baseball America Top 100 lists from 2005-2015) that have made their debuts over the past decade (Note: I used the first season of 100+ PA to at least get presumed consistent playing time. Usually, it was the first season, but there are a couple times where it is the “second” season):

There’s obviously a mixed bag of offensive production from each, from great starts like Buster Posey to OH GOD MY EYES Travis d’Arnaud. Anyone who has paid any attention to prospects knows that players don’t always translate well to the majors. As I mentioned above, that transition is pretty difficult. It is somewhat assumed that players are “developed” once they reach the majors, but they all have room to grow. Yet, I was a little surprised to see that catchers really haven’t seemed to “fall on their face” as a group.

The .251/.302/.400 line isn’t great, but when you compare that against the league average for catchers (below) last season and over the past decade, it’s basically dead-on the league average for catchers. Of course, this is the average for all catchers, and we would expect starting catchers to hit a bit better. And there’s some performance bias in that the guys who fail are going to get fewer PAs, thus affecting the averages less and lifting the whole average (which is why I included the “Average” area where I just averaged the actual BA, etc. numbers themselves – not really sure it does a lot of good but hey).

But of course, what we want to know is what this means for Swihart’s future. So let’s take a look at career numbers: 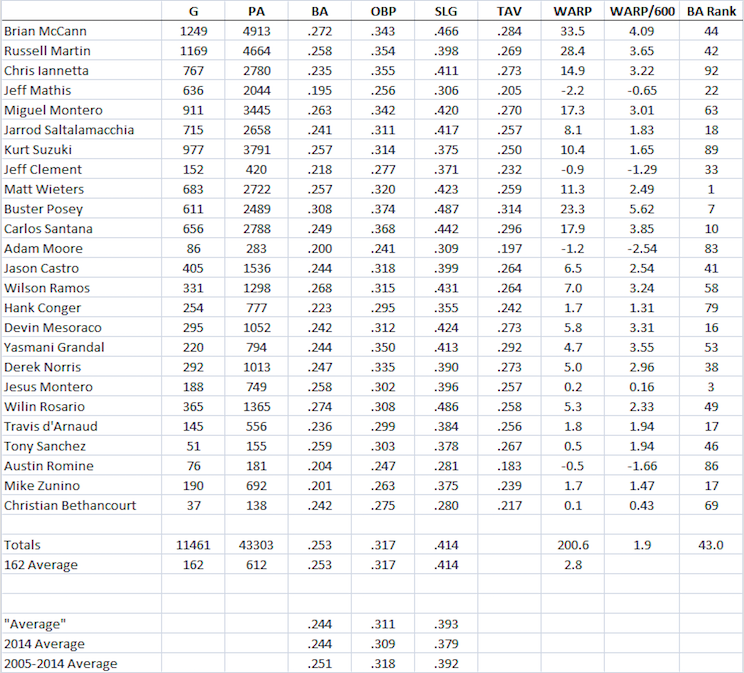 You’ll notice the overall batting line comes up about 15 points in OBP and SLG, but again, the same caveats about performance bias, etc. still apply. But the general theme applies that these backstops are turning into solid major-league catchers – 12/25 turned into above-average (TAv over .260) MLB hitters and 18/25 turned into at least averageish hitters (TAv over .245). Looking at WARP, I used WARP/600 PA to balance out a little of the bias, and the average WARP/600PA was 1.9, which is basically an average starting catcher. Of course, if a catcher makes a top 100 list you might want him to have a better chance of becoming an above-average hitter than 50/50 or average of about 75%, but when it comes to prospects, there is simply a lot of attrition.

But I would also say that Swihart compares very favorably to that overall list. Why?

– Age: He is basically right on time with the average age of these players. And while he might be a little older, one could make the argument that the additional experience is actually a bit of a positive, considering he’s not that much older. The ages lining up like this shouldn’t be much a surprise, but I’m mostly making the point that he’s not an Evan Gattis-like pop-up on to the scene.

– Experience: Swihart has over 1,250 minor-league PA and three years of patient development. He has performed extremely well at each level, especially the last two seasons, at a young age for each league, and he is not getting “rushed” to the majors like a college catcher such as Matt Wieters. And he’s already at AAA, eliminating some of the attrition of simply having to climb the ladder.

– Prospect Ranking: I hate rankings because they imply a level of certainty that does not really exist, but given that Swihart was just ranked 17th by Baseball America and our own Baseball Prospectus team – 25-26 spots better than the average best ranking for each catcher (the BA Rank column) – he seems to be held in at least slightly higher regard than most catchers on the list. My caveat to that is that I ran a general correlation between BA Rank and TAv for the debuts, and the correlation was -.144 or not at all, really. But it does jump to about -.40 for careers, so prospect ranking seems to matter a little for long-term success.

While common wisdom is that catchers have a tough time transitioning to the majors, they seem to be doing fairly well over the past decade.

– Scouting Report: I won’t go into specifics, but Swihart is well-regarded at the plate and should be at least average behind it. He’s a well-rounded player that is considered one of the top prospects in the game.

While this is all well and good, we are still left wondering what Swihart’s actual future is. Is he the next Jarrod Saltalamacchia – solid but expendable (for an ace *cough, cough*) – or Buster Posey – a franchise cornerstone? As I mentioned above, he seems to have a pretty good chance of being an average or better catcher based on recent history and his placement in on top prospect lists. Of course, Blake Swihart is an individual, and it is basically impossible to predict how he will actually do. But while common wisdom is that catchers have a tough time transitioning to the majors, they seem to be doing fairly well over the past decade, and as long as the Red Sox deem him ready, there don’t seem to be any additional alarm bells besides the normal one for all prospects.