On Friday night in Baltimore, Brock Holt hit a go-ahead 3-run home run in the bottom of the 8th inning. It was a huge hit, worth .429 WPA that pushed the Red Sox win expectancy to 93.4%. Holt’s home run, and the ensuing win also pushed the Red Sox across an important early season hurdle. The win, the Red Sox‘s tenth on the season, ensured that they will actually have a chance of making the playoffs this year.

At this point you must be wondering what I am prattling on about. Here it is directly: in the history of the Red Sox franchise, the first 20 games have represented a benchmark for season success. If the team played .500 baseball or better (10 or more wins), they have in some instances gone on to make the playoffs. But if they‘ve played worse than .500 ball (nine or fewer wins) the playoffs have consistently been out of reach.

The Red Sox are an 114-year-old franchise (established in 1901) that has enjoyed a reasonable amount of post-season success (22 playoff appearances). Yet, remarkably not one of those playoff appearances has come when the team started 9-11 or worse. Getting out to a below .500 record in the first 20 games has happened 46 times in Red Sox history. You’d think that at least one of those teams were unlucky or had a tough schedule in their first 20 games, but then played better over the course of the next 130-140 games and managed to secure a playoff appearance. Well, you’d be wrong. It has not happened. You can see for yourself here. For whatever reason getting a tenth win (in the first 20 games) has been crucial for this franchise. Oddly enough two of the 13 Red Sox squads that started 10-10 eventually went on to win the World Series (the 1903 and 1916 Red Sox).

The Red Sox are not necessarily a singular franchise when it comes to the overwhelming influence of the first 20 games on their playoff likelihood. The goose-egg oddity is true for four other franchises (three of whom are relatively new):

The data in the table are grouped by franchise. So 39 of the Baltimore Orioles seasons are actually St. Louis Browns seasons, and 14 of the Washington Nationals seasons are Montreal Expos seasons.

To more broadly see the trend between eventually making the playoffs and early season record, here is a figure showing the proportion of teams making the playoffs as a function of the number of wins they recorded in their first 20 games. For sample size reasons I excluded seasons in which teams had fewer than four wins, or more than 16 wins. Because we are really most interested in looking at the Red Sox, I have shown them separately in red. 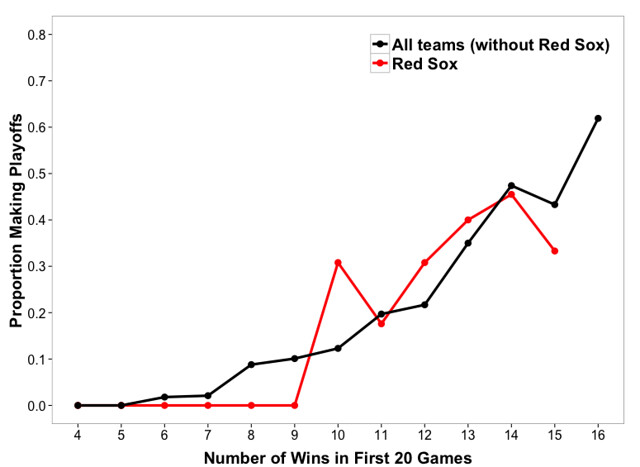 As is evident, and should be to some extent expected, winning more games in the first 20 has led linearly to more playoff appearances. This is true for all teams, including the Red Sox. However, what is striking, and the reason for this discussion, is the jump for the Red Sox between the nine- and 10-win marks. Roughly 10% of the 337 nine-win non-Boston teams made the playoffs, while none of the Red Sox teams did. At 10 wins, roughly 12% of the 316 non-Boston teams made the playoffs, but four of the 13 Red Sox teams did (31%). Much of this result is just odd things happening in small samples, and it’s not uniquely predictive, but it is interesting nevertheless. And it’s a great way to justify that sinking feeling you get when the Red Sox are losing games early in the season! Historically, getting a couple of extra wins in the early going has been important for increasing the likelihood of making the playoffs, and especially so for the Red Sox.

For whatever reason getting a tenth win in the first 20 games has been crucial for this franchise.

All told, being one-game above .500 rather than one-game below .500 (just a separation of two wins) has meant a 10% difference in making the playoffs. Now, it must be said that there is likely nothing special about these first 20 games. If you checked all 20-game streaks in a season you would find the shocking result that being above .500 in those streaks more often than being below .500 leads to a better chance of making the playoffs. So we should continue to avoid overreacting to a team’s performance in the early going.

Regardless, it could be said that the 2015 Red Sox crossed an important hurdle on Friday night. Getting swept in Baltimore would have placed an ominous cloud over the season; a new curse needing to be broken if you will. But thanks in part to Brock Holt’s power stroke this team will finish no worse than 10-10 in their first 20, which means that, if history is any guide, they have at least some chance of making the playoffs this year.

We can all breathe a little easier.

1 comment on “Crossing the First Hurdle: Playoff Chances After 20 Games”