It has been an ugly run of games for the Red Sox of late, but the players looked glorious last night, breaking the losing streak in 1975 throwback uniforms:

1975 throwbacks are lined up in the Clubhouse. Get here early for Fisk bobbleheads & ’75 team! #RedSox pic.twitter.com/SpRjq1zkhj

I hope they plan on wearing these getups a few more times this season, especially if they bring wins like yesterday’s.

Top Play (WPA): The man of the night last night was the man that you should pick to build a team around: Mookie Betts. Rays’ starter Drew Smyly held the Red Sox hitless through the first five innings. Dustin Pedroia and Allen Craig had walked, and Mike Napoli had reached on an error, but no clean knock had happened. Mookie changed all that with a blast over the monster to lead off the bottom of the sixth inning (WPA: + .173).

Mookie’s homer (the first of two on the night) would prove to be all the scoring the Sox needed, as Rick Porcello (7 innings pitched), Alexi Ogando (1 IP) and Koji Uehara (1 IP) combined to shutout the Rays.

Bottom Play (WPA): Rick Porcello scattered eight hits over his seven innings of work. Things looked a little dicey in the fourth when Evan Longoria and David “don’t mess with” DeJesus started the inning with back-to-back singles. On Porcello’s third pitch to Logan Forsythe the Rays put Longoria and DeJesus in motion. Forsythe lined the pitch to center, but right at Mookie Betts who caught the ball and fired it into second base to try and double off the runner. Longoria, who made it about ¾ of the way to third base, stumbled while trying to retreat to second base and could not beat Mookie’s throw to Xander Bogaerts who was covering the bag (WPA: – .141). It was a really close play, one in which Longoria may have actually been safe, but the Rays elected to not challenge the call.

Key Moment: The game remained 1-0 through seven innings, until Mookie Betts led off the bottom of the 8th with his second bomb over the monster on the night. This was actually the second best play of the night (WPA: + .071), but may have been more impressive than the first.

Mookie’s big night resulted in some fun edits to the Rays’ wikipedia page: 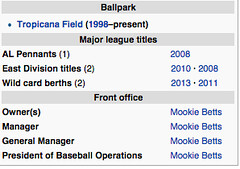 Trend to Watch: Prior to the game the Red Sox announced that an MRI of Hanley Ramirez’s shoulder revealed no structural damage, meaning he should avoid a stint on the disabled list. This is great news. The unfortunate news is that his absence likely means more playing time for Allen Craig. It has been suggested that Craig just needs regular plate appearances to return to his 2013 form: .297 TAv, 134 wRC+. While that might be true, he had 505 PAs in 2014 and did not look like his 2013 self: .212 TAv, 69 wRC+. Perhaps the Lisfranc injury he incurred in September of 2013 has had a larger impact on his performance than was expected. PECOTA projected Craig for a .278 TAv (in 329 PA) this year, so there is some expectation that he can be fairly productive at the plate. For now, Craig’s bat remains a question mark, and he is not a particularly good outfielder, although he is an upgrade over Ramirez in that department. If Ramirez has to miss more than a few games the Red Sox better hope there is some truth to the regular playing time hypothesis.

Coming next: Justin Masterson will toe the rubber against Rays’ rookie Alex Colome, who makes his second start of the year. Masterson’s last two outings have been decent (13.0 IP, 13 H, 5 R, 1 HR, 4 BB, 5 SO). Maybe he can push his quality start streak to three! Silver linings, folks. Silver linings. Colome held the Orioles scoreless over five innings in his first start. He struck out six and walked nobody. The patient Red Sox lineup will have to make him work and take advantage of any mistakes. The Sox need to keep filling up the win column.