At 27-37 and with four other teams ahead of them in the division, it’s probably time for the Red Sox to start looking ahead to the trade deadline. This season notwithstanding, the losing seasons help make the winning ones happen — and trades are a big part of why. The Red Sox will almost definitely be sellers, especially since it’s unlikely that all four teams ahead of them will collapse, and because the mix of players isn’t likely to change.

And that’s kind of the problem. The cast of players likely to be cast off by next year — Mike Napoli, Shane Victorino, and Justin Masterson — are not doing so hot. As things stand today, the Red Sox are unlikely to pick up any meaningful prospect in a trade unless they include a player with more years of club control, like Koji Uehara, Junichi Tazawa, or maybe even Clay Buchholz, Wade Miley or Steven Wright. We can expect the team to keep trying to win games, but we might also expect them to begin to take trade positions into account.

Assume teams value players more or less the same way, or that — with respect to MLB trade targets, anyway — most teams know who guys are. That being said, a version of a player who’s “hot” will often fetch more than a version of said player who’s “cold.” This especially true if you can point to some kind of change, some adjustment that helps you buy into a hot streak and explain away a slump.

There’s no Andrew Miller this year, and there will be no Eduardo Rodriguez — not from trading a departing free agent. But the Red Sox have every incentive to tweak something, anything with Breslow and Ogando (move Breslow to the third-base side of the rubber?). With respect to Ogando, there may be an easy, visible way to make a change that could help build value if he happens to improve — by changing his pitch mix.

Ogando doesn’t have the velocity he once did with Texas. This is the first odd-numbered year in which he pitched in an MLB uniform and didn’t start most of the time; in this velocity graph from Brooks Baseball, you can see an expected dip in fastball velocity in 2011, when he moved from the bullpen to the rotation and started 29 games. Returned to a relieving role in 2012, Ogando was again a monster in the pen, albeit without monstrous success; he had a 9.00 K/9 with a four-seam that averaged almost 98 mph. But when he pitched mostly out of the rotation again in 2013, his velocity sunk even lower than the last time he was a starter. Shoulder issues probably played a role in that, but unlike when he returned to the bullpen in 2012, 2014 did not see a meaningful tick back up. 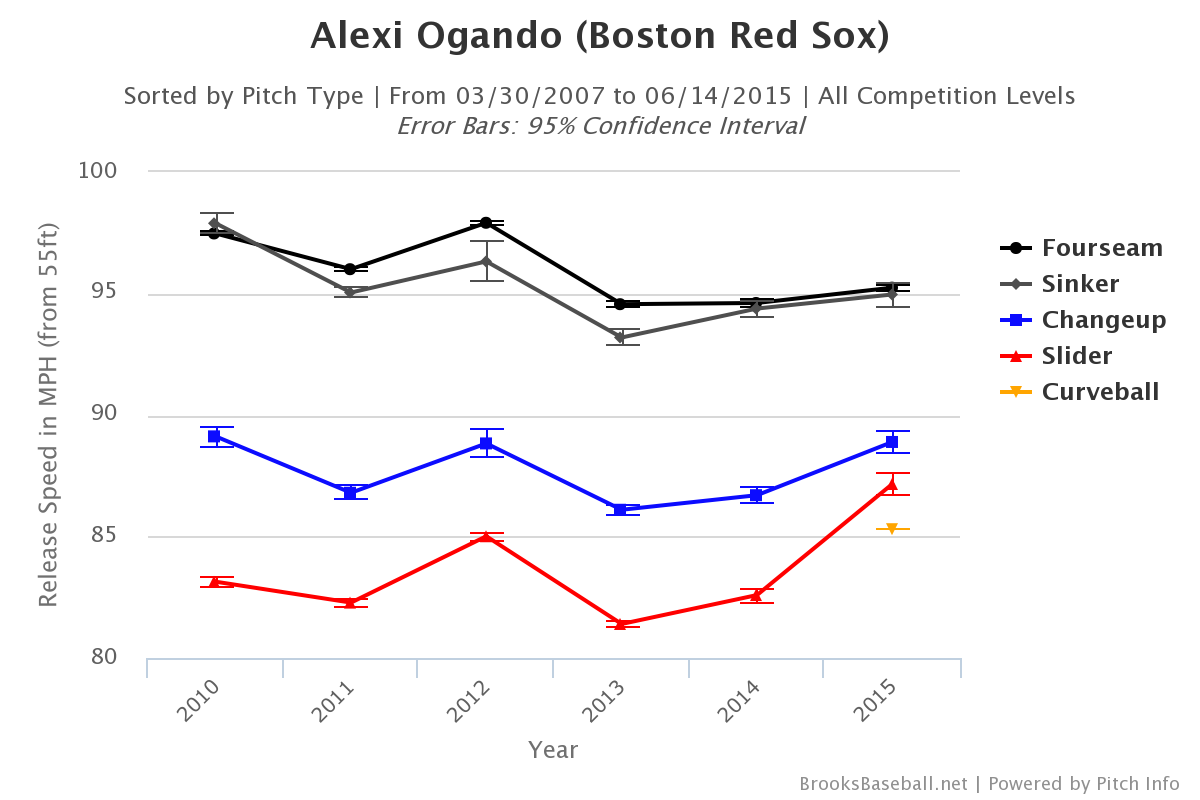 The dip in fastball velocity corresponds with Ogando’s strikeout rate, as well. For his career, he holds a 6.49 K/9 as a starter and 8.22 K/9 in the bullpen — but this season, he’s been striking hitters out at a mediocre rate of 6.23 per nine. It’s not a question of pitching to contact — he’s averaging a low but not super-low rate of 3.87 pitches per plate appearance, within a handful of pitches from his career 3.97 rate. In fact, his percentage of pitches in the zone is down to 48% — down 2% for the third consecutive year from 54% in 2012.

Ogando has faced just 105 batters this year, nearing his total in 2014. Check out how he’s pitched differently:

We can’t go nuts over changes in a few percentage points, not with each one representing just three or four pitches thrown — but surely there’s something that can be shoehorned into a narrative for the trade deadline.

Two pitches have been thrown more frequently, and both have been hit harder. Not that either is really alarming — a .517 slugging against on a four-seam isn’t great for a reliever, but he’s been in the mid-400s the previous four seasons anyway. A .429 slugging against on his slider might be more of a problem even though he’s thrown the pitch less often. Ogando has thrown the slider at a normal-ish frequency of 20%-30% for most of his career, but it’s done better in the past when thrown even more often than the 28.9% he’s thrown it in 2015. As you can see from the velocity chart, he’s throwing the slider much harder this year than he did in the previous two seasons — but that may not be helping.

Whether Ogando’s string of recent earned runs will continue may have more to do with luck than anything else — over the next five weeks or so, he may turn in the equivalent of a start and a half, and anything can happen. But what if increased success could be traced to increased changeup usage?

Batters have only hit Ogando’s change on the ground so far this year when hitting it into play — and over his career, he’s had a whiff rate of over 30% with the pitch. Maybe it’s something? Pump up the rate at which Ogando throttles down, and if it corresponds with an improvement, maybe trade discussions go just a little bit differently.

Or, everyone could go really crazy, and Ogando could throw more pitches like this one on Saturday, classified as the first (unintentional?) curveball of his major league career. Having what amounts to an option for 2016 means something, but realistically, what would Ogando command in trade right now? Can a curveball really hurt that much?

Tags: Alexi Ogando |
Ryan P. Morrison
Follow @@ryanpmorrison
Ryan P. Morrison is a co-author of Inside the 'Zona, and may have been the first person to suggest moving Hanley Ramirez to first base. You can thank him later.
read more from Ryan P. Morrison