A somewhat under-reported aspect of this disaster of a Red Sox season is the performance of the bullpen. Through Wednesday’s games the Red Sox bullpen has the 23rd worst ERA (3.86) and 28th worst FIP (4.26). Those numbers would not be too problematic if the use of the relievers was limited, but, due to frequent poor performance of the starters, the bullpen as a unit has thrown 209.2 innings, which puts them in the top third of the game. For a while the relievers were doing a reasonable job despite the high workload, but the stress on the bullpen is beginning to be too much and performance is starting to slip. In the last week, the bullpen has allowed 20 runs in their 24.2 IP. This is something that Craig Edwards foretold in an article at FanGraphs a while back, and was noted in one of our excellent editions of Read Sox.

The problems are many among the relievers. Koji Uehara and Junichi Tazawa are the strength at the back, but to me Tazawa looks tired. He leads the group in innings and the results from two of his last three outings support the idea that fatigue is affecting him. Tommy Layne has been the next best, a sentence I never thought I would write, and we have probably seen his peak. After that, things get ugly quickly. There is really no bridge to the quality arms at the back end. Craig Breslow performed tremendously in the postseason in 2013 — a stretch that should not be diminished as the Red Sox likely don’t win the World Series without his effort — but since then he has been one of the five worst relievers in the game (among qualified pitchers). It is hard to justify giving him any more innings. Alexi Ogando seemed like a nice buy-low signing for the Sox this year (1-year, $1.5 million), but he has been sub-replacement level, giving up dingers at an alarming (also unsustainable) rate, and is striking out fewer batters than is typical for him in a relief role. I could go on, but the take home message is that something needs to change.

This brings me to Joe Kelly: the man with the 96 mph fastball and not much to show for it. It is no secret that Kelly has struggled as a starter. He has recorded a quality start in just 49.2% of his 61 starts, a mark that ranks him 106th out of the 142 pitchers that have made 50 starts since 2012. He has never thrown more than 150 innings in a season, or made more than 20 starts. This season he is sporting an ERA that is 33 percent worse than league average, and his peripherals suggest he is worse than a league average starter (105 FIP-). Without Yadier Molina, Kelly appears to be a man stuck on an island without a plan for getting to shore. Seemingly every start he tinkers with his approach for incorporating secondary pitches, but the results have simply not come. Kelly just turned 27 years old. He is what he is as a starting pitcher. At this point, I think he can provide more value to the Red Sox as a two-pitch reliever who is used in high leverage spots along with Tazawa and Uehara.

Failed (or struggling) starters who move to the bullpen generally require a strong fastball and one secondary pitch that can get swings and misses. Kelly has both in his arsenal. His fastball, which is already good, could see a velocity jump with a move to the bullpen, and then he could adopt his changeup (or slider) as his secondary pitch. His changeup already rates as an above average offering, with the combination of horizontal and vertical movement helping to generate a high percentage of whiffs per swing. Combining it with his fastball could make both significant weapons. Much of this could also be said about his slider, so he would have options for which pitch he focuses on mastering.

Moving to a role as a reliever brings obvious advantages: he would not have to navigate a lineup three times and would not have to worry about pacing himself, which could allow him to really fire the fastball. Kelly, like any other pitcher, is subject to the times through the order penalty. His opponents have been 35 points of OPS better after having seen him once in a game, which is almost entirely driven by an increase in their slugging. Strangely, from the second to the third time through Kelly’s OPS against drops to a level lower than his first time, but that is largely a selection bias, sample size issue. As mentioned above, Kelly does not throw a lot of innings, so he has only faced opposing lineups a third time in roughly 70 percent of his starts, which is another point in favor of converting him. Regardless, the jump from first to second time through could be avoided if he was used as a one- or even two-inning reliever.

To project how Kelly’s numbers could change with a move to the bullpen we can look at his previous marks in the role, and consider Tom Tango’s ‘Rule of 17‘. Kelly spent parts of 2012 and 2013 as a reliever for the Cardinals, which is nice as it means the role would not be entirely new to him. Here are his splits:

Obviously there is a sample size issue with the relief statistics, but it gives some idea of how he could perform. Relying on Tango’s Rule of 17, which states that BABIP is 17 points lower as a reliever, strikeout rate is 17% higher, home runs per contact is 17 points lower, and walk rate is the same, to translate Kelly’s career numbers as a starter would give something like the following as a reliever:

Those numbers don’t jump off the page, and frankly they look a lot like what he has done as a starter this year, but that fact is actually reason to think that the K% could be higher than this Rule of 17 projection, perhaps more in the 21-23 percent range. The likely increase in strikeout rate coupled with having him avoid facing a lineup multiple times are compelling enough reasons to make the change.

The obvious question in all of this becomes: if Kelly is moved out of the rotation, who takes his spot? The first four spots seem pretty well settled with Clay Buchholz, Rick Porcello, Wade Miley and Eduardo Rodriguez. Justin Masterson is an option for the fifth spot, but he ranks only two spots higher than Joe Kelly on that quality start percentage list since 2012, with only 49.5% of his outings being of the quality start variety. Plus, the team appears to be planning to add him to the bullpen upon his return. While Masterson does not have the big fastball that is common among relievers these days, at this point he really should be limited to facing an opposing order once. In his career, Masterson’s .675 OPS against the first time through has jumped to .739 on the second trip, and then .752 on the third trip, although none of those numbers are likely representative of the pitcher Masterson is in 2015. Also, every pitcher suffers these times through the order penalties, so that is not the only reason to move a player out of the rotation. If a pitcher is struggling as a starter, as Kelly and Masterson have been, and there is a viable role for him as a reliever, then it is incumbent on the team to organize their players in such a way as to best limit the damage. 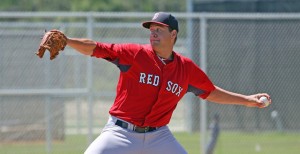 If Masterson is out of the mix, then a tandem of Steven Wright and Brian Johnson could be the answer. At this point there is not much of a difference in the projections for Wright and Kelly as starters (~ 0.5 difference in ERA the rest of the season), and the left-handed Johnson has been excelling at Triple-A Pawtucket (2.51 ERA, 3.27 FIP in 68 innings). Pairing them in the fifth rotation spot would ease the pressure on each pitcher, help with TTOP, and make it more difficult for opposing lineups to stack themselves in such a way as to consistently gain a platoon advantage. That is, unless they elect to go right-on-right against the knuckler Wright, which some teams do. Platooning lineups aside, this sort of approach – limiting back-end rotation pitchers to shorter outings – is something that has worked well for the Tampa Bay Rays this year. They have limited a few of their pitchers to 15-20 total batters faced per start, which has in turn reduced the extent to which they get into trouble. Once again the Rays seem to be ahead of the curve with on-field strategy, and it has helped propel their team of interesting parts to the top of the division.

If the rotation is set as I have suggested the bullpen becomes Uehara, Tazawa, and Kelly as the primary high-leverage guys, Layne and Masterson as xOOGYs, and then two of Matt Barnes, Robbie Ross Jr., Alexi Ogando and Heath Hembree to round things out. I would even consider promoting Henry Owens into a bullpen role. It would allow him to get his first real taste of the big leagues as a reliever, which is an approach many teams have taken with top pitching prospects, and it has worked fairly well. Executing this plan, or something similar, would give the Sox a 13-man staff, which is at least one too many, but it is the number the team is currently working with and probably for the best until things are settled and relievers accept throwing more than one inning at a time. Getting the pitching staff down to 11 and having a deeper bench is more advantageous in my mind, but that is an article for another day.

The decision to move Kelly to the bullpen and rearrange the roster to accommodate the move depends, at least to some extent, on if the Red Sox think the season is lost. If Ben Cherington, John Farrell and the gang think it is lost then I suppose there is some sense in letting Kelly wail away as a starter for the rest of the season in the hope that he can figure it out. But if the thought is that this team can make a run at the postseason, and I’ll admit it is getting stark as their BP playoff odds are down to 8.0%, then it seems reasonable that the team will be better with Kelly coming out of the bullpen. Of course the whole thing could just be an exercise like moving the deck chairs around on the Titanic.