We, as fans, all want our rookies to be superstars right out of the gate. We crave greatness and glory, and with the advent of round-the-clock prospect coverage, we’re in better position than ever to anticipate the next great player. When the Sox called up Xander Bogaerts or Mookie Betts or Jackie Bradley Jr., people weren’t looking for a good young player. They weren’t hoping for “good.” They were hoping for Fred Lynn.

Fred Lynn was, most famously, the first ballplayer to win both the Rookie of the Year and the MVP award in the same season. But Lynn was more than just a stellar, barrier-breaking debut season. He spent one partial year and six full seasons with Boston before moving on to California, and in those seasons he was a top-flight player and perennial All-Star.

After partial seasons in 1973 and 1974 in the Red Sox system, Lynn made his debut in 1974 with a Rusney Castillo-esque cup of coffee. I use Castillo as a comparable because, like the recent Cuban import, Lynn was awfully exciting in his first taste of big-league action. By BP’s WARP, he was worth almost a win in just those 15 games, thanks to timely hitting and two homers.

By the time 1975 started, Lynn was entrenched as the team’s everyday center fielder. He played a solid center by most metrics — BP’s Fielding Runs Above Average (FRAA) disagrees with the other metrics and posits below-average performance — and earned a Gold Glove Award, but that was probably the least impressive of his major accomplishments. Lynn was an offensive force, posting a .329 True Average (TAv) on the strength of 21 homers, 47 doubles and a league-leading .566 slugging percentage.

While the AL Rookie of the Year award may have been chalk for such an offensive outburst, WARP tells the story of a player who perhaps should have been passed over for his signature MVP award. WARP posts Lynn’s season as the 17th best among position players in baseball that season, behind American League stars like second-year player George Brett, Thurman Munson, Rod Carew and Reggie Jackson, among others. However, Lynn had the second-best OPS in baseball (.905), behind just National Leaguer Joe Morgan. The catch: OPS isn’t park-adjusted, and Fenway Park was a pretty wonderful hitters’ park in the 70’s. When you look at TAv (.329) instead, Lynn was still great, but fell into close proximity to players like Carew, Ken Singleton, Toby Harrah, and John Mayberry.

In 1975, Lynn had the narrative to win an MVP, but he was nearly as good — by WARP, not so much by traditional offensive stats — in 1976. His slugging slipped nearly 100 points, the homers were cut in half, but the defense may have improved to the point where he only lost 0.5 WARP from his sparkling debut season. Of course, he still made the All-Star team. 1977 saw another slip, this one more substantial. It would be his worst in a Red Sox uniform, as he barely hit at a league-average level (.249 TAv), and too many balls in play found a glove instead of grass. He still made his third All-Star Game, though this one seemed more a gift than a just reward.

The following season, Lynn returned to form somewhat, posting a 3.7-win season by BP’s metrics. Lynn’s batting average — a prime driver of his offensive performance — rebounded to .298 from .260 the previous season. He hit 22 home runs, which would become something of a yearly expectation as his career progressed. He made an All-Star Game. What else should have been expected?

In 1979, Fred Lynn played his best baseball in his penultimate season with the Red Sox. He won the batting, on-base, and slugging titles with a .333/.423/.637 slash line. He hit 39 homers, his career high, and played sharp defense by all modern metrics. He took home his second consecutive Gold Glove and — like clockwork — returned to his fifth consecutive All-Star Game. Despite such a season, bigger and better hardware eluded him. 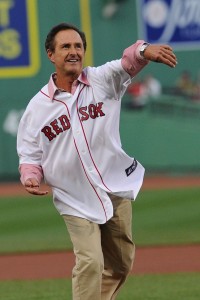 Lynn could have deserved his second MVP Award — he came in fourth in the voting behind Don Baylor, Ken Singleton and George Brett. And while Lynn handily out-performed Baylor and Singleton, George Brett had the greatest claim to that MVP in hindsight, having posted 9.63 WARP to Lynn’s 7.84. At that point, both players were at the peaks of their powers, but while Lynn may have been the superior hitter in ‘79, Brett had close offensive production paired with a world-class defensive performance at third base. He probably had the greater season.

1980 brought a close to Lynn’s tenure with the Sox, as he would be traded after the season. But, before he left, he’d give the team his sixth full season of very good performance. Despite only playing in 110 games, Lynn performed very admirably when in the lineup. His slash line was full of lovely numbers: .301/.383/.480, and he posted nearly five full wins in three-quarters of a season. He won yet another Gold Glove (his third in a row), and — yes — made yet another All-Star team.

It turned out that Lynn was leaving the Sox on a high note. The trade that sent him to the Angels didn’t bring much back to the Red Sox, but Lynn only had one more elite season left in him, his age-30 year in 1982. He’d play another 10 seasons with the Angels, Orioles, Tigers, and Padres, but more than half his career value was wrapped up in his seven years at Fenway.

Lynn’s legacy is that magical 1975, but also a couple of other things. He was peppered with minor and major injuries throughout his career, often playing in less than a full season and amassing between 450-600 PA in most years. He made nine consecutive All-Star Games as a center fielder, but the metrics tell us that he was more likely an average or slightly-above average fielder, despite four Gold Gloves. In his later, post-Boston seasons, he became a liability in the field.

Just because he wasn’t a Hall of Famer doesn’t make Fred Lynn less than a singular player in Red Sox history.

When it comes to overall career performance, Lynn looks like a classic case of a player who was very, very good, but not great enough to warrant induction to Cooperstown. He had a very good peak, but not a long enough one to offset very average performance in the later part of his career. His career WARP of 47.7 is admirable, but about 10 wins short of being in the sweet spot of potential Hall of Fame induction.

But just because he wasn’t a Hall of Famer doesn’t make Fred Lynn less than a singular player in Red Sox history. No other player had such a dynamic debut in red and navy, and he was part of a very memorable outfield in the late 70’s. He doesn’t compare identically to anyone currently on the Red Sox roster, but perhaps the player in the system who could be most like Lynn is Double-A center fielder (and top-20 prospect) Manuel Margot. Lynn leveraged good-but-not-great tools across the board into a couple of truly special seasons when everything came together, and there’s a chance that Margot could do the same in a best-case scenario.