Welcome back to Fenway’s Future. This week we look at Justin Haley’s turnaround on the mound, Joseph Monge’s recent surge in Low-A Greenville and the performance of some lower-profile players at the halfway point of the season.

When the Red Sox signed Dayan Diaz to a minor league contract after the 2013 season, they were acquiring a pitcher seemingly on a downward movement toward irrelevance. The right-hander out of Colombia had been hit hard in the Cubs system, and with a limited arsenal of pitches appeared destined for a minor league career of being knocked around out of the bullpen. Diaz has found new life in a season and a half in the Red Sox organization, recently becoming one of Pawtucket’s most reliable relievers. On Sunday, the 25-year-old tossed his sixth-straight scoreless appearance, tossing 12.1 combined innings and dropping his ERA to 2.57 in 13 Triple-A outings.

At 5-foot-10, 190 pounds, Diaz is relatively undersized, but possesses a hard fastball that sits in the mid-90s and a plus slider with good break and swing-and-miss ability. Although he’s been used sparingly out of the bullpen, Diaz has been good for two-to-three innings most appearances. While his current scoreless streak is impressive, Diaz is still prone to allowing multiple baserunners an outing, forcing him to escape difficult situations. Given his 86.6 percent LOB%, he usually succeeds. However, Diaz has surrendered at least one hit in each of his Triple-A appearances, and his 3.64 FIP – significantly less notable than his ERA – suggests this current run he’s on may not be something he can withstand, even if there’s still good potential.

Mike Miller struggled mightily at the plate since being promoted to Pawtucket in late May. Really, it’s been a tough 2015 offensively for Miller overall. The 25-year-old had a rare productive holiday weekend, collecting three hits over two games, including a triple on Sunday, and scoring two runs. It was only the fourth time since June that Miller – a 2012 ninth-round pick out of Cal Poly – has collected hits in consecutive games, this after starting out hot upon his promotion. Given the abundance of depth and talent at the middle infield spots throughout the Sox organization, Miller would need to be outstanding to have a shot at sniffing the major leagues. He’s certainly been dependable with his glove, totaling just one error in a combined 34 games between second base and shortstop. However, with a .203 true average and an underwhelming 5-foot-9, 170-pound frame, he hasn’t done enough offensively since a solid 2014, or flashed enough potential, to convince anyone he’s primed to make a difference in the near future.

If anyone can speak to a rough 2015 season, it’s Justin Haley. The righty has had a miserable year after six strong starts in Portland last season, owning a 4.01 FIP through 16 starts this season and making three to four earned runs, walks and many more hits a regular occurrence. The 2012 sixth-round pick out of Fresno State has seen his strikeouts go down and his walks increase, and he’s often struggled to make it through five innings. At 24 years old, Haley is a tall, strong pitcher, but is limited to a solid, low-to-mid 90s fastball, an average changeup and the occasional breaking ball that’s produced unspectacular results.

Despite the season-long struggles, Haley is pitching the best he has all season. He threw a five-hit shutout Sunday, going six innings and striking out six in a PawSox win. It’s the third time in his last four starts Haley has pitched a shutout and lasted six innings, and could be the start of a nice turnaround. Like most pitchers, Haley is at his best when he’s piling up strikeouts and limiting walks. That’s something he’s done effectively as of late, as he’s struck out 17 and walked four over his last three starts. Nonetheless, although he’s been a starter throughout his career, and has done it well lately, Haley seems better fit to pitch out of the bullpen long-term. He tails off as he gets later into games and his secondary stuff isn’t effective enough to last him as a regular rotation arm. 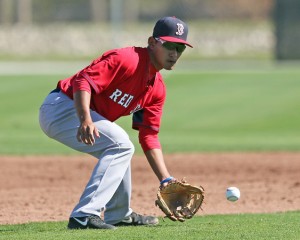 With Mauricio Dubon being promoted to High-A and Jose Vinicio still playing well, finding regular playing time for Tzu-Wei Lin will become increasingly harder. Lin is a speedy, defensive-minded shortstop whose big-league journey will go as far as his glove will take him. However, despite fringe-average contact potential, Lin is using his bat to remain a regular in the Salem lineup. The 21-year-old Taiwan native holds a .261 TAv and .334 wOBA this season, and has been especially hot of late. Lin was on a seven-game hitting streak before being held hitless Saturday, going 13-for-27 (.481) in that span. He’s making more solid contact and has seen his strikeouts drop significantly in the last two years, making the case that he could be just as effective at the plate as with his glove. His offensive numbers have actually increased with each promotion thus far.

Low-A Greenville: Joseph Monge, OF and Bryan Hudson, OF

Joseph Monge is coming off one of his strongest weeks of the season, one in which he went 10-for-21 at the plate capped off by a four-hit day on Sunday. It was an important stretch for the skinny outfielder from Puerto Rico. Monge has spent his first three years in the Red Sox organization struggling to find consistency at the plate. He’s an athletic player with good range in the outfield, but has been held back by high strikeout numbers and a lack of overall strength. Monge’s a solid contact hitter, but making contact is still an important part of the process. This season his K% sits at 22.4 percent to go with a .258 TAv. Monge has made progress as the season’s progressed, something that’ll be necessary for the 2013 17th-round pick to ascend in the organization. Perhaps last week was the start of Monge finally discovering that consistency.

It took just six games in Lowell for Bryan Hudson to get the call to Low-A Greenville. The 20-year-old started the season hot at the plate and hasn’t slowed down since. He’s collected hits in all but two of his nine games in Greenville, and rode a five-game hitting streak into Tuesday after consecutive multi-hit games. A 2015 fifth-round pick, Hudson isn’t particularly big and imposing, but he has plus speed and finds the gaps effectively. He owns .325 batting average and .406 BABIP, but with an underwhelming .271 TAv despite his success he may be due for a drop-off. What is clear is that Hudson’s defense still has a long way to go. While his speed is an asset, Hudson needs to improve on his reads in the outfield and is lacking in arm strength.