It’s been a crap year for the Red Sox as a team, but there’s no way to really look at Boston’s 2015 starting rotation than as a complete failure. How’s that for an opening sentence? Always like to start off with words like “crap” and failure!” Sadly, it’s appropriate. Fresh off a huge extension, Rick Porcello has been one of the worst starting pitchers in baseball. Justin Masterson might —MIGHT!—be worth a flyer as a bullpen arm. Joe Kelly spent significant time in the minor leagues and is only back up because the season is lost. Wade Miley looks … serviceable. Hooray! Only Clay Buchholz, who was, in order, great, unlucky, great again, and is now hurt, has been any good. The end result is one of the worst starting rotations in baseball and a major part in yet another last place finish for the Red Sox in the AL East. Now, with the trade deadline looming as the official acknowledgement of a lost season, it’s an appropriate time to examine the future of the Red Sox rotation. Put another way, let’s see if we can build Boston’s 2016 rotation!

We’ll start with what’s on hand. There are five starters currently on the major league roster who will be under contract and could fit into the 2016 rotation. They are Buchholz, Kelly, Miley, Porcello, and Eduardo Rodriguez. In theory that isn’t a bad starting point, but if you consider 2015 to be “in practice” then yuck. Still, we trudge forward. Buchholz, when healthy is a front-line starter. The problem is there’s no way to plan for how many innings you’ll get out of him. As such it becomes very difficult to count on him for the balance of the season. Porcello… well, we’ll get to him in a bit. Miley is a fine fifth starter, a good one even, but the further up the rotation you push him the more he’s stretched in the role and the worse it reflects on the rotation as a whole. For now, let’s be optimistic and put him as fifth. Oh, and we’ll slot Buchholz in third. Kelly might yet win his Cy Young, but chances are, if so, it’ll come as a reliever. Rodriguez has shown an ability to achieve excellence, but his problems with pitch tipping and flat performance in recent starts creates pause. Still, he’s clearly an excellent talent and one the Red Sox would be foolish to run from. We’ll put him fourth for now. 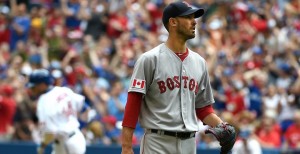 Now… Porcello. He’s owed a substantial amount of money ($82 million over four years) which is fine if he’s a good or even average pitcher, but when you’re paying over $20 million per season to someone who doesn’t belong on a major league mound, that’s a problem. So what to do with him? They can’t cut him because they’re not going to eat $82 million. They can’t trade him because they can’t eat $82 million. So play him, except they can’t play him because he’s awful. I suspect the remainder of the season will be devoted in large part to figuring out what the heck Porcello’s problem is and fixing it to the best of their ability. Perhaps he can rediscover his sinker and thus some measure of success, but if not it’s as hard to imagine the Red Sox going into the season counting on him to be successful in the rotation. That said, it’s equally difficult to imagine the Red Sox going into the season without him. He’s owed SO much money and players sometimes have bad seasons and come back to be good players. It’s absolutely happened before. But still… it’s a pickle. For now though, until he shows he belongs in a major league rotation we’re leaving him out.

That puts the 2016 rotation as follows:

It’s not hard to see that the Red Sox have a fine, even good, middle and back of the rotation. Now we get to the problem area, the part of this that becomes difficult because it’s difficult to acquire two top-of-the-rotation starters in one off-season, but also because we’ve seen how this front office has treated and paid for starting pitchers. Since Cherington took over the Red Sox have dealt away Jon Lester and John Lackey rather than extending them. He’s dealt for Porcello and Miley and signed Masterson. He acquired Jake Peavy. This is an uninspiring record. Yet, if there ever was an extended period ripe for acquiring exactly the kind of players Boston desperately needs, this is it. The trade market offers up Cole Hamels and Jeff Samardzija, with Tyson Ross and Sonny Gray potentially available as well. Then there’s the free agent market which will boast David Price, Johnny Cueto, Jordan Zimmermann, Doug Fister, Hisashi Iwakuma, and quite probably Zack Greinke if he opts out as he’s expected to, as well as Kazmir and Samardzija assuming they don’t sign extensions with which ever teams acquire them at the deadline (editor’s note: Astros, we know). It’s an almost unprecedented level of talent available in exactly Boston’s position of need.

But, even with all of those players potentially available, based on their past record, the Red Sox don’t seem like candidates to jump into the free agent market with both feet. They might be more likely to give up significant assets in a trade for Sonny Gray than to give David Price $200 million. They could also do both which would solve our little rotation equation nicely, but given that the Red Sox already owe $128 million to 10 players next season (assuming David Ortiz’s option triggers at $16 million), giving $25-30 million more to one player might be difficult.

But then the Red Sox are in the business of winning baseball games and, as we shall see, there isn’t exactly an ace available in Pawtucket or even Portland. The Pawtucket Red Sox have given most of their starts this season to Henry Owens, Brian Johnson, Steven Wright and a collection of organizational players. There was also Kelly, who likely finds his way onto Boston’s 2016 roster either as a seventh starter/swingman or a bullpen piece. The Portland Sea Dogs have next to nothing to offer the 2016 Red Sox in terms of starting pitching. They had Joe Gunkel, who might have been a back end major league starter eventually, but they traded him to Baltimore for Alejandro De Aza. The end.

Based on their past record, the Red Sox don’t seem like candidates to jump into the free agent market with both feet.

Realistically speaking, the minors can offer Owens, Johnson, and maybe Wright, but it’s not likely any of those three will step into the front of Boston’s rotation next season or, really, ever. That’s not to downplay what Owens or Johnson might be, because you never ever really know, but every indication so far is that both are back-of-the-rotation major league starters with middle-of-the-rotation upside. That’s great and all, but the Red Sox have that area covered already. The hole at the front of the rotation remains.

So what is the answer? The front office will certainly explore the heck out of the trade market. Billy Beane can expect some calls about Sonny Gray. The White Sox will hear about Chris Sale (though that will likely be a short phone call). The Nationals may get a call about Stephen Strasburg. The Red Sox still have prospects and the major league team, frustrating as it is, isn’t bereft of tradable talent either.

That seems like a best case scenario though. The cost of most all of these guys is going to be high and also I’ve conveniently left Rick Porcello out of the rotation, which [sad face] you probably can’t do. Where does he fit in? He has half a season to help us answer that question. If he ends the season in the manner which he’s began it, as horrible mess, the team may have to make a very expensive and difficult decision just to get to the list I have above. In addition to the continued development of Mookie Betts and Xander Bogaerts, Porcello’s second half may be Boston’s most significant storyline.

We like to say the time leading up to the deadline is crucial but in this case it really isn’t. What the team does on the field ceases to matter. What matters now are individual storylines and how the organization sets itself up for 2016. The deadline and the accompanying trades it will bring are the start of that. The Red Sox need a much better starting rotation if they hope to do much in 2016. 2015 is over. Time to get to work.