Last week, Jeff Long published a piece at Baseball Prospectus on curveballs and effective spin. Spin numbers calculated by PITCHf/x are based on movement, gravity and speed, but by comparing those numbers to numbers for actual spin from Statcast, as Long noted, we can start to calculate “useful” spin. I don’t have the Statcast data, but part of the piece’s premise was that even PITCHf/x can help zero in on pitchers who are doing more with their curves, or who aren’t using their curves as much as they could. I was curious to see whether high spin curveballs seemed to be something the Red Sox had an eye or appetite for.

Since even Mike Bolsinger throws something other than curveballs, looking at individual pitchers can only tell us so much. Even if a pitcher throws a curve — and, counting relievers, that’s a minority of major league pitchers — he’s unlikely to throw it more than around 20% of the time. There are a ton of factors that can make a starter a good pitcher or a good value, and looking only at curveballs is blind to that kind of thing. Still, something might show up in raw counts for curveballs, especially since teams might ask pitchers to emphasize or de-emphasize the pitch.

A 1500 rpm spin rate means something different in PITCHf/x than it does in nearly all of the Long piece, but I, being poor, have only my dreams, and we’ll just try to tread as softly as we can. Using 1500+ rpm as “high spin” and 1499 rpm and lower as “low spin,” here are the raw counts for MLB teams: 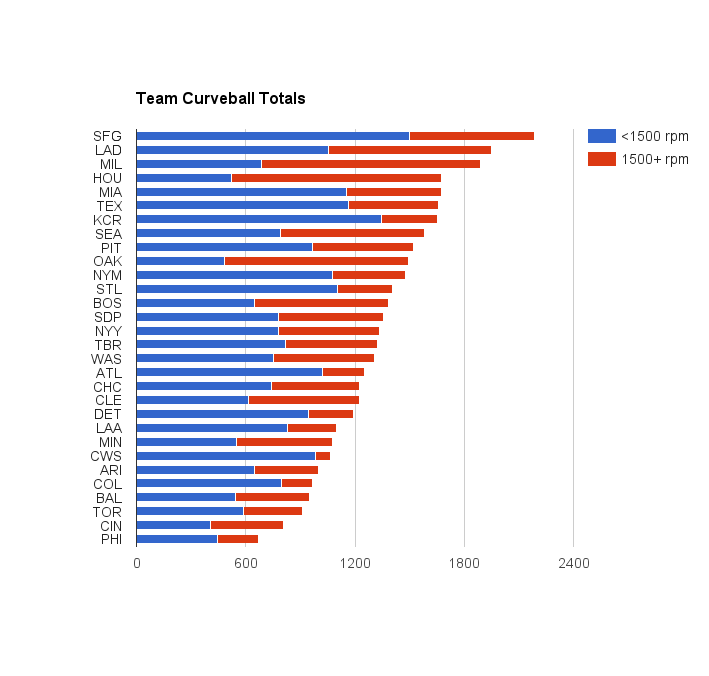 With Clay Buchholz leading the way for the most part, the Red Sox fare pretty well on that list. They look really good, though, when looking at each team’s number of “high spin” curves, as a percentage of total curveballs picked up by PITCHf/x: 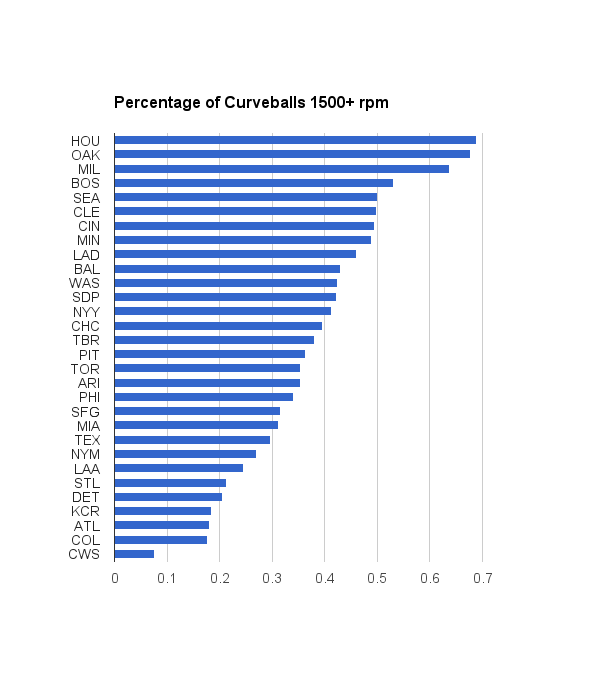 While the Red Sox don’t throw a ton of curveballs in the context of MLB, they’re high enough on this list percentages-wise to make us wonder if it’s something they’ve been looking for. Many of the others near the top are poorer teams, which make sense; power arms are expensive, generally speaking, and if Ted Lilly taught us anything, it’s that a good curveball can keep a pitcher in the majors even if he throws a fringy fastball and locates it up in the zone. Even the Dodgers — who we know were looking at this when they bought (into) Bolsinger — do not rank very highly here. If team totals don’t point toward the Dodgers, maybe it’s not a good way to find teams attuned to curveball spin rate as the focus of possible changes in MLB. Still, maybe it’s like what Bill James said about good hitters with poor bat speed: it’s not that a team like the Yankees isn’t aware there are Bolsingers out there. Maybe richer teams can simply afford not to make plays for undervalued pitchers based on curveball spin rates, since they can vie for the more expensive (and perhaps more reliable) kind of pitching.

That still makes Boston an unlikely club to top the list, but maybe this is an effect of what appeared to be an emphasis on ground ball pitchers last offseason. Really, all of the pitchers who throw curves were added to the 25-man within the last 12 months, except for Buchholz, Junichi Tazawa, Craig Breslow and (arguably, at least) Steven Wright. Using 1500 rpm from PITCHf/x as the dividing line on spin: 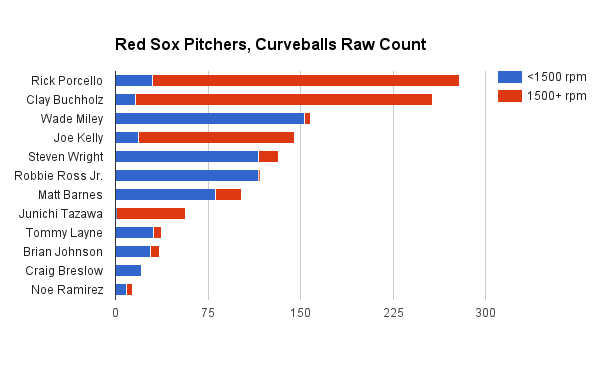 The front office that targeted Joe Kelly in trade (87% “high spin”) and inked Rick Porcello to a large and long-term extension (89%) is the same as the one that picked up Robbie Ross (1% “high spin”) and traded for Wade Miley (3%) and signed him for what were apparently cost-control purposes. Still, Miley rarely threw a curve before this season (more like 1%-2% of the time), and pumping it up to 8% or so, Miley has seen his curve be his most effective pitch this season, both by batting average (.200) and slugging (.280). A groundball rate of over 70% on Miley’s curve probably doesn’t hurt.

If this lends any insight as to what the Red Sox have been thinking with curveballs, it’s still in the order of not caring a whole lot. For established major leaguers, spin rate may be more about whether to emphasize the curve more or less, in general — although we’ve seen the team go in the opposite direction with Miley, it seems. The Red Sox may just not have a need to go looking for underutilized curveballs using spin rate; if you can afford it, past results work as a much better metric for likely future curveball results. Why find a Collin McHugh or Mike Bolsinger if you can just sign Porcello … or at least the pitcher Porcello was supposed to be?

Tags: Clay Buchholz, Joe Kelly, Rick Porcello, Robbie Ross, Wade Miley |
Ryan P. Morrison
Follow @@ryanpmorrison
Ryan P. Morrison is a co-author of Inside the 'Zona, and may have been the first person to suggest moving Hanley Ramirez to first base. You can thank him later.
read more from Ryan P. Morrison