Pulling into the All Star Break, Wade Miley carted around with him an underwhelming 4.80 ERA, without the surprisingly good strikeout rate he’d shown in 2014, and without the over 50% ground ball rate that had been the key to his success throughout his career. Since then, Miley hasn’t been dominant, exactly, but he’s been more like the solid #3 starter the Red Sox thought they were getting.

He’s not the only pitcher to have improved this season, and things may be looking up with the rotation. Front and center is Rick Porcello’s recent renaissance, although Eduardo Rodriguez’s adjustments earlier in the season may have been more significant. From a Rob Bradford piece at WEEI.com on the last day of June, quoting Clay Buchholz on E-Rod’s pitch tipping:

“In the midst of that one inning that Eduardo had the other day, it was me and Wade [Miley] sitting down in the batting cage watching TV and balls are getting hit hard. I think the one that set us off was the Chris Davis slider. It was a good slider away and he stayed on it and went the other way. You have to expect 96 or 97 and you’re staying back on a slider on a full count, left on left? It didn’t register. So we went in there and looked at it and found something that was not really blatantly obvious if you’re not looking for something, but as we sat down and started looking we found something that he was doing on every off-speed pitch and he wasn’t doing it on his fastball.”

It’s a game of adjustments, and for a pitcher like Miley who had realized success in the past, you can bet he was as hard at work on his own business as he apparently was on Rodriguez’s. Still, few of the classic changes stick out for Miley. His velocity has ticked down just a bit, a change almost too small to mention; and other than a slight uptick in changeup usage, he didn’t really change his pitch mix, either. We were all keeping a close eye on the staff’s pitch location this season after the team appeared to target pitchers who lived down in the zone, but any difference there has also been modest.

If there’s an explanation for Miley gaining better traction, it might be: he’s just not as easy to read.

If there’s an explanation for Miley gaining better traction since the end of July, it might be a bit closer to the explanation for Rodriguez two and a half months ago: he’s just not as easy to read. A small decrease in the difference in speed between Miley’s fastballs and offspeed pitches might have made them more effective — the changeup in particular. Watching all that video, though, Miley may have picked something else up. 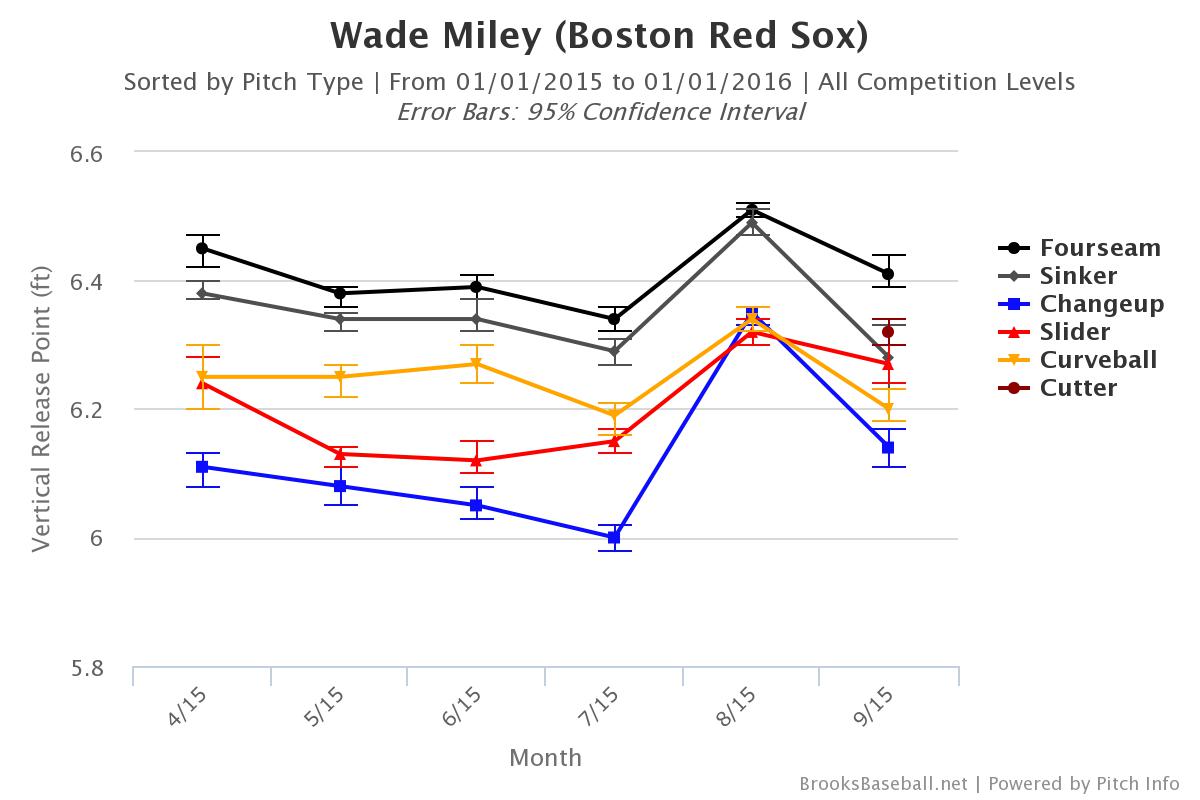 Miley’s release point is just plain different for each of his pitches; look at a similar graph for horizontal release point, and you see a much wider spread. To some extent, that’s where he is on the rubber, and how the pitches are thrown. I’m still tempted to put Miley’s curveball in a different category — it’s not really a deception pitch — but for his slider and changeup, Miley relies on some deception. One could see how it might be a problem, then, to have several inches’ difference in release point.

We still might not care, but for the remarkable spike in August you can see in those average vertical release points. The change, in particular, also gets closer to the fastballs horizontally. After starting the year with low whiff rates on his slider, 8% and 10% in the season’s first two months, it’s risen to 17%, 18%, 16% and is now slipping back to 15% in his first two starts of September.

It’s not a huge difference, but it does look like maybe Miley went back to the drawing board after the seven earned run drubbing he suffered at the hands of the White Sox at the end of July. Between that start and his next turn against the Rays, the release point on Miley’s change appears to have climbed 2.5 inches skyward.

In slotting higher in general in August than he did in July, Miley did generate less horizontal run on his change (-1.94 inches), and somewhat less on his four-seam (-0.73 inches) and sinker (-0.83 inches). The three pitches also had more rise, frequently thought of as a good thing for a four-seam (+0.41 inches) but not necessarily for a sinker (+0.63 inches) or change (+1.59 inches).

It may be that a slight, temporary difference in look gave Miley an only temporary advantage, with his release points slipping back so far in September; he didn’t actually have better success with the sinker or change in August. But Miley did have much better success with his four-seam and slider from July to August, and may have benefited from better deception in general. Just the latest in a string of adjustments, perhaps, and maybe that alone is a good sign from a pitcher likely to be a rotation fixture for at least two more seasons.

Tags: Wade Miley |
Ryan P. Morrison
Follow @@ryanpmorrison
Ryan P. Morrison is a co-author of Inside the 'Zona, and may have been the first person to suggest moving Hanley Ramirez to first base. You can thank him later.
read more from Ryan P. Morrison