Welcome to BP Boston’s new Roster Recap series! Over the next four months, we’ll be breaking down every player on Boston’s 40-man roster and many of their top prospects in order to provide a comprehensive overview of the Red Sox roster’s strengths and weaknesses, as well as what we can expect moving forward. There’s no better time than the offseason to review the best (there was some best!) and worst (there was a lot of worst!) of the past year in red and navy. You can see previous editions of Roster Recap here.

Eduardo Rodriguez didn’t start the season with the kind of hype or fanfare other prospects received in spring training. He was still relatively new to the organization after being acquired from Baltimore at the 2014 trade deadline for Andrew Miller. He was a young lefty who threw hard but had yet to pitch past the Double-A level. Little else was known about him. How his stuff would translate as he advanced through the system was still a mystery.

Meanwhile, the Red Sox’s starting rotation was a disaster in 2015. Poor performance and injuries plagued this group of aceless wonders from the start. The team needed a savior, or at least a glimmer of hope. That hope came in the form of a 22-year-old with eight Triple-A starts under his belt.

Rodriguez made what was supposed to be a spot start in May, but dazzled in a three-hit shutout against the Rangers and never saw Pawtucket again. Before long, he became a phenom in Boston as the team’s most reliable starter. He had his share of clunkers and was far from unhittable, but the Red Sox finally discovered a foundational piece for the future of a pitching staff in desperate need of help.

The numbers don’t do Rodriguez’s impact on the Red Sox in 2015 much justice. Sure, a 3.92 FIP, .267 opponent true average and 2.3 WARP are decent, but to say that’s representative of his overall performance is misleading. Rodriguez was a bright spot in an otherwise horrid season for Red Sox pitching. He immediately established himself as one of Boston’s best pitchers, posting a microscopic 0.44 ERA and 21 strikeouts over 20.2 innings in his first three starts. Such success was  unsustainable over an entire season, but he remained steady, solid and a mainstay at the top of the rotation. That was especially important after Clay Buchholz’s season ended in July. Rodriguez allowed one run in four of his final five starts, giving him 12 starts in which he allowed one run or fewer on the season.

Rodriguez’s strength was his fastball, and he didn’t hesitate to use it. He threw the pitch a whopping 66.47 percent of the time, according to Brooks Baseball, and used it as a weapon to overpower hitters. He possessed both tremendous velocity and control. His heater averaged about 94 mph and touched as high as 98, making him one of the hardest-throwing lefties in the American League. But his control rarely suffered, as is evidenced by his 2.74 BB/9 compared to his 7.25 K/9. Rodriguez’s fastball helped set up his secondary offerings, particularly an effective changeup that batters whiffed at 16 percent of the time. His ability to mix in an offspeed pitch to create swings and misses complemented his fastball perfectly.

Rodriguez was especially good against right-handed hitters, who posted a .239 TAv against him in 2015. That proved useful given some of the most dangerous hitters in the AL East, such as Jose Bautista, Josh Donaldson, Edwin Encarnacion, Alex Rodriguez, Adam Jones and Manny Machado, bat right-handed.

What Rodriguez did more than anything last season was provide much-needed hope. The outlook was bleak for the Red Sox in 2015. They ranked among the worst in baseball in nearly all pitching categories throughout the season. It was a problem that manifested itself early and never really went away. But Rodriguez gave the organization something to work with as it tries to once again rebuild its rotation. He was a reason to watch games every fifth day, even as the team sat in the AL East cellar. Rodriguez didn’t just take advantage of his opportunity, he exceeded all expectations and strong-armed his place in Boston’s future.

Rodriguez allowed more than three runs in just four starts last season, but there’s a reason his numbers don’t scream top-of-the-rotation starter. Those four starts weren’t just bad: they were the worst thing the Red Sox had seen since Rick Porcello’s last appearance. Rodriguez posted an 18.00 ERA in those four outings, which ultimately inflated his season totals. Those ugly games stemmed from a tendency to implode and let single innings get away from him quickly.

The first such instance came in his fourth-career start June 14 against the Blue Jays. Rodriguez tossed three scoreless innings before allowing six in the fourth, finishing with nine runs over 4.2 innings. June 25 against the Orioles was a similar story, as the lefty was once again strong through the first three innings before a six-run fourth ended his day. That was the second time he was shelled in a three-start span. Shortly after that outing, pitching coach Carl Willis said it was “borderline obvious” Rodriguez was tipping his pitches.

The next implosion came July 20, when a seven-run second inning by the Angels ended his day prematurely. Then finally there was that Aug. 12 start against the Marlins. Rodriguez had already given up four runs entering the sixth inning of a 4-4 tie, but surrendered four more that frame to spark a 10-run Miami rally. Remember, this was against the Giancarlo Stanton-less Marlins.

Rodriguez struggled with his command in each of the four outings. He fell behind early in counts and was forced to attack the strike zone more aggressively. That exposed his fastball in the middle-to-lower half of the zone, where he got crushed on most occasions.

Here’s how it looked visually: 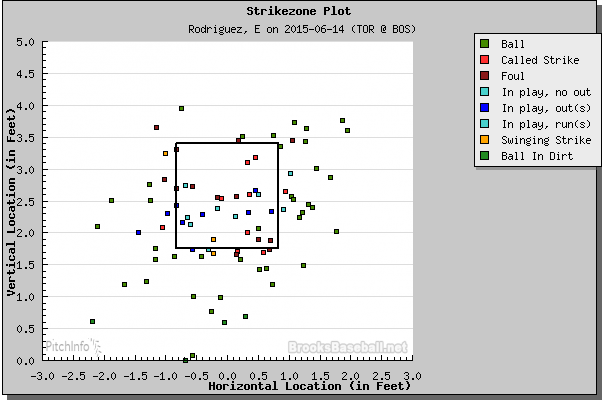 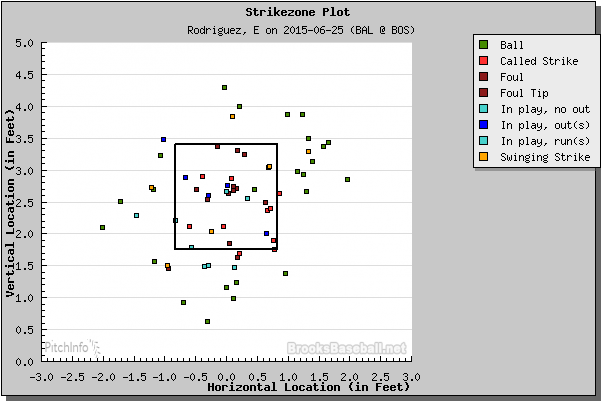 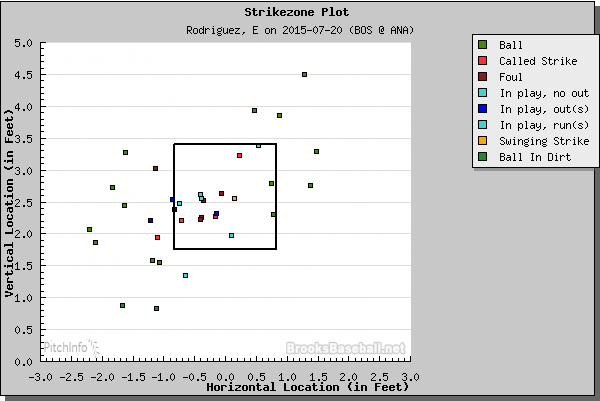 Hitters, in fact, typically had success whenever Rodriguez’s fastball landed in the lower half of the zone. 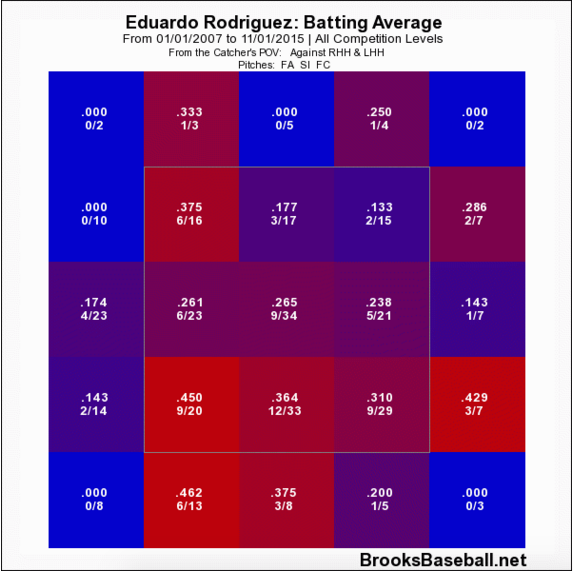 Rodriguez also struggled against lefties. He posted a 5.25 FIP and 2.15 HR/9 against left-handed hitters, who enjoyed a .285 TAv against him last season. But he most of all needs to improve his slider. It was known entering the season that his slider was the least effective of his three pitches, and it showed statistically as batters hit .355 with a .613 slugging percentage on a pitch he threw 11 percent of the time, according to Brooks Baseball. That will need to change if he’s to keep southpaws at bay.

The return of Clay Buchholz and the possibility of acquiring another top-of-the-rotation arm this offseason likely takes the pressure off Rodriguez to be Boston’s No. 1 starter in 2016. But the expectations will still be high for a player entering what will in a sense be his first full major league season. We’ve gotten a glimpse of just how good Rodriguez can be. The next step will be doing it consistently. That means learning to limit the damage on the bad days and not letting games get out of hand.

Rodriguez’s ceiling seems to be that of a strong No. 2, although that probably will not happen in 2016. It’s more likely he’ll be a solid No. 3 who, with a few lucky breaks, could receive All-Star consideration. But in order to do that he needs to improve his secondary pitches and use them more frequently and effectively, along with his fastball.

Rodriguez’s durability will also be worth watching. He tossed 121.2 innings over 21 major-league starts, and combined with his Triple-A workload totaled 170 innings over 29 starts. The best case for the Red Sox is that he can become a 200-inning pitcher who builds upon his impressive debut in 2015.

There’s a great unknown with pitchers, however. A strong first season certainly doesn’t guarantee long-term success, especially when recognizing how vulnerable Rodriguez is to some atrocious outings. His dependency on a mid-to-upper 90s fastball naturally makes future arm injuries a concern as well.

But if 2015 is any indication, there’s plenty to be excited about with Rodriguez for next season and beyond.