So far June has been a rough month for the Red Sox. Heading into last night’s game they were 4-7, with many of those losses coming at the hands of intra-division foes. Last night was a return to the April-May Red Sox, as the offense busted out six runs and Steven Wright held the potent O’s offense down over 7.1 innings before handing things over to the bullpen. It was a nice win.

Top Play (WPA): In the bottom of the second inning the Red Sox got on the board. After David Ortiz grounded out, Hanley Ramirez worked a walk and was moved to third on a Chris Young single to center field. Travis Shaw came to the plate with two outs and runners at first and third. The way Shaw, and the bottom of the lineup in general, has been hitting it had the makings of a wasted opportunity. But Shaw came through, driving a double to left field, scoring Ramirez and moving Young to third (WPA: + .111). Unfortunately, Christian Vazquez could not add on, as he struck out to end the inning in what was the second worst play of the night (WPA: -.052).

Bottom Play (WPA): In the top of the third inning Steven Wright grazed the leadoff batter, Joey Rickard, with a pitch. Ryan Flaherty then grounded weakly to second on a ball that Dustin Pedroia made a nice play on, but the ball was not hit hard enough to spin the double play. The next batter, Adam Jones, hit a dribbler between Wright and Christian Vazquez for a hit. As if enough weak contact had not been made, Hyun Soo Kim grounded to Pedroia for another fielder’s choice at second base, as the ball was again not hit hard enough for the Red Sox’s infielders to turn two. All this weak contact brought Orioles’ superstar Manny Machado to the plate for a moment that seemed destined to bite the Red Sox for their unfortunate inability to get out of the inning. Instead Machado popped out to Hanley Ramirez in foul territory, ending the threat (WPA: -.057).

Key Moment: In the bottom of the third inning the first six Red Sox batters reached base. The sixth was Hanley Ramirez turning Kevin Gausman’s first slider of the night into an absolute bomb:

Leading to this moment in the dugout afterwards: 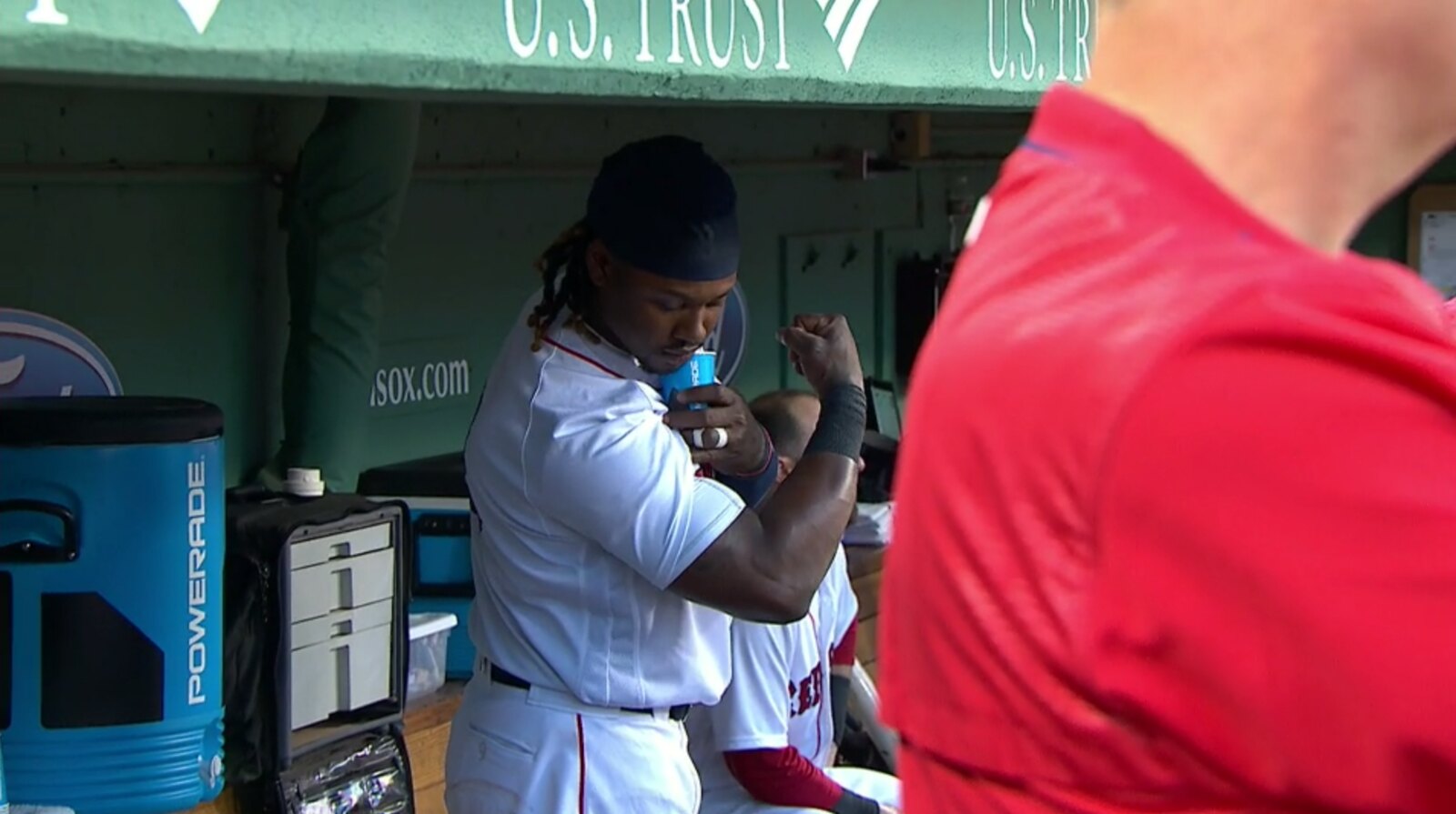 The home run put the Red Sox ahead 6-0 at the time and turned out to be the winning hit.

Trend to Watch: Travis Shaw and Hanley Ramirez getting things back on track. It is no secret that Shaw and Ramirez have been scuffling lately. However, over the past couple of nights both players have showed signs of getting their offensive production going again. Last night, as noted, Shaw had the big opposite-field RBI double in the second inning, but he also worked a walk in a strong plate appearance in the third. But then he swung at the first pitch in his next two trips to the plate, grounding out weakly to second base both times. Seems like more work is needed. Meanwhile, Hanley worked a walk in his first plate appearance, hit the dinger shown above in his second, and roped a single up the middle in his fourth. He had a great night at the plate and, all posing aside, is reportedly confident that he is on the right track and ready to explode offensively:

Hopefully he is right. Having Hanley and Shaw knocking the ball all over the yard again will keep this lineup producing and covering for the mediocre pitching staff.

Coming next: The Red Sox will finish up their series with the Orioles tomorrow night at Fenway. Eduardo Rodriguez will take the mound looking to get his season rolling in a positive direction. The 6.06 ERA (7.54 FIP) is not even close to the expectations many have for Eduardo. Some good news rests in the fact that his lone decent outing this year was against the very Orioles he will take on tomorrow. The Orioles will counter with Tyler Wilson, who has moved from the bullpen into the rotation, although he had much more success when he was used as a reliever. He started against the Red Sox at the end of May and fared well, allowing three runs over 6.2 innings. In their second time seeing Wilson, the Red Sox’s league-leading offense should be able to do more damage. With a win tomorrow they can win this series and get themselves back to .500 against American League East opponents.