Plenty of things make headlines throughout a baseball season. It’s the nature of covering professional sports, especially a sport with a 162-game season. For the Red Sox, those headlines have included offensive dominance, long hitting streaks and a never-ending roller coaster ride for their starting pitchers. One player who hasn’t made headlines lately is Craig Kimbrel. In fact, it seems as if we’ve heard nothing about him over the past two months. But if your closer isn’t making headlines, that’s probably a good thing. That means he’s doing his job and finishing games without trouble. And that’s certainly been the case for Kimbrel.

This dawned on me during Wednesday night’s 6-4 win over the Orioles. Kimbrel came in with a two-run lead in the ninth and finished off Baltimore on 14 pitches. No drama, just a quick 1-2-3 inning. It had me wondering just how good Kimbrel has been since his struggles in April. The numbers say he’s been nothing short of dominant. Heading into Sunday’s game (when he struk out three Mariners), Kimbrel struck out 22 batters and posted a 0.52 ERA over 17.1 innings since his first blown save of the season on April 24, allowing runs in just one of those 17 outings. He’s succeeded in 10 of his last 11 save opportunities. He’s become the closer the Sox were hoping they’d get when they acquired him from San Diego for a bevy of prospects in the offseason; the one who starred over four seasons in Atlanta.

Kimbrel didn’t look like that player over his first 10 appearances. He struggled with his fastball location and got crushed, posting a 5.00 ERA in that span with bad outings that included a three-run ninth-inning disaster in the home opener against the Orioles, and the game-tying two-run homer he served up to Colby Rasmus in Houston on April 24. Since then he’s become one of the American League’s best closers. He owns a 2.38 FIP, 2.34 DRA and a 38.8% strikeout rate. His 12.99 K/9 is tied for fourth among AL relievers and second among AL closers. He’s been that good, even if his efforts have flown under the radar.

It’s only mid-June, but Kimbrel is on pace for the best season by a Red Sox closer since Koji Uehara’s otherworldly 2013 campaign. That season, injuries to both Joel Hanrahan and Andrew Bailey forced Uehara into the closer’s role, and he delivered with a 1.06 ERA, 1.64 FIP, 1.42 DRA, 12.2 K/9 and 21 saves over 74.3 innings on a World Series-championship team. Uehara’s next two seasons were good, but not quite as dominant.

Those are good closer seasons, but Kimbrel looks like a slight upgrade now with his recent performance combined with Uehara being 41 this year. And that’s exactly what the Red Sox were hoping for. One reason for Kimbrel’s turnaround his been the increased use of his knuckle-curve. Kimbrel was overly dependent on his fastball in April, and too often left himself susceptible to hard hits when he missed location. As the chart below shows, his knuckle-curve use has increased by nearly 10 percent over the past two months. 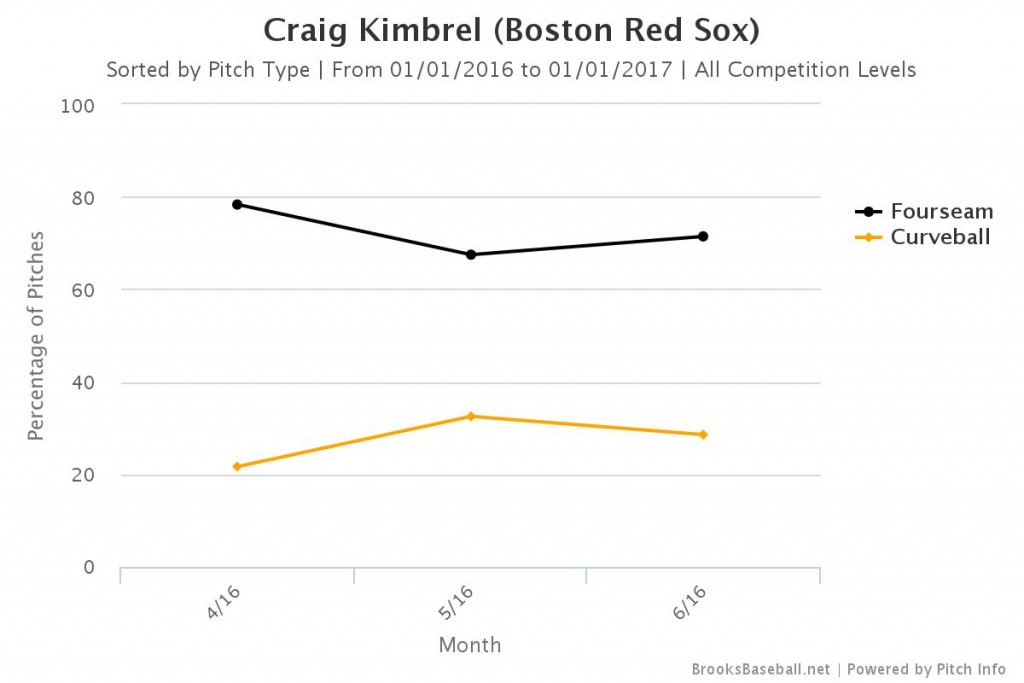 Kimbrel is still heavily dependent on his fastball, which, given his upper-90s velocity, is a weapon, but the knuckle-curve has also yielded positive results, particularly as a way to get swings and misses and put hitters away. According to Brooks Baseball, Kimbrel has struck out 17 batters with the curve, posting a  22.94 percent whiff rate and a .111 batting average against it. The reasons for his success with that pitch have been when he uses it and his location of it. Kimbrel has thrown the curve 60 percent of the time when ahead in the count against lefties and 47 percent when ahead against righties, per Brooks Baseball, which has allowed him to keep the ball down and attack the corners of the strike zone. He’s consistently hit his location and the results are evident. 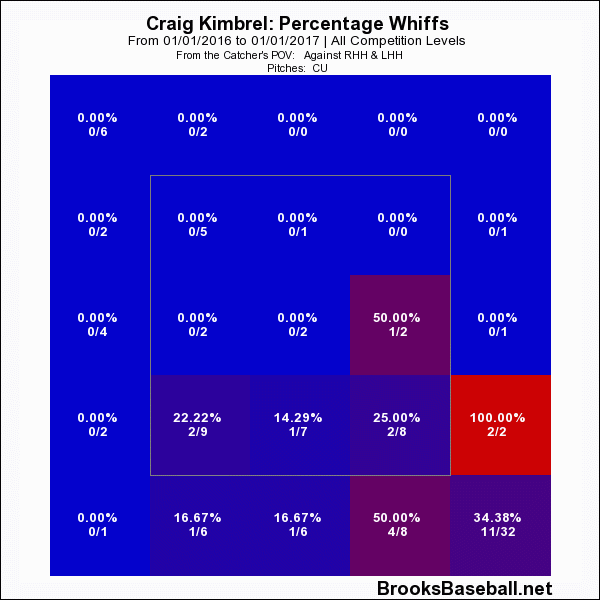 Kimbrel used the knuckle-curve in such a way in Wednesday’s save. He only threw it three times in a 14-pitch outing, but the first time was the fifth pitch of the second at-bat of the inning, at pitch that caught the inside corner and left Adam Jones looking at strike three. 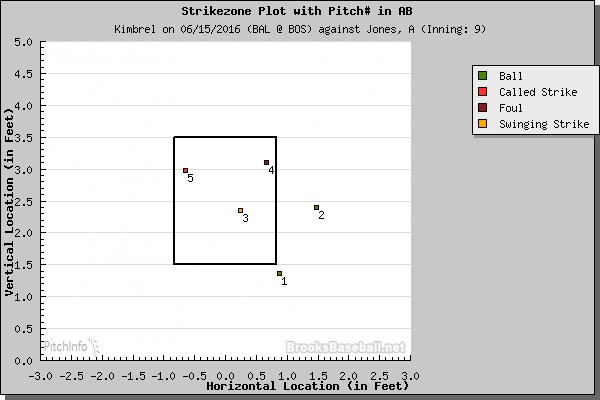 One potential area for concern is Kimbrel’s surprisingly low ground ball rate (30 percent) and his high fly ball rate (56 percent). These numbers are atypical for Kimbrel and atypical for most elite pitchers. The good news is his line drive rate sits at just 14.0 percent, so the hard contact has been limited, but it seems unlikely a pitcher can induce fly balls nearly 60 percent of the time and expect to dominate.

Kimbrel is primarily inducing fly balls from his fastball. According to Brooks Baseball, Kimbrel’s fly ball rate sits at 5.42 percent on his fastball as opposed to his 2.75 rate on the knuckle-curve. Most of those fly balls are coming on pitches left anywhere in the strike zone. It’s not a big revelation that fastballs in the middle of the zone would be hit to the outfield, but it at least offers some explanation. 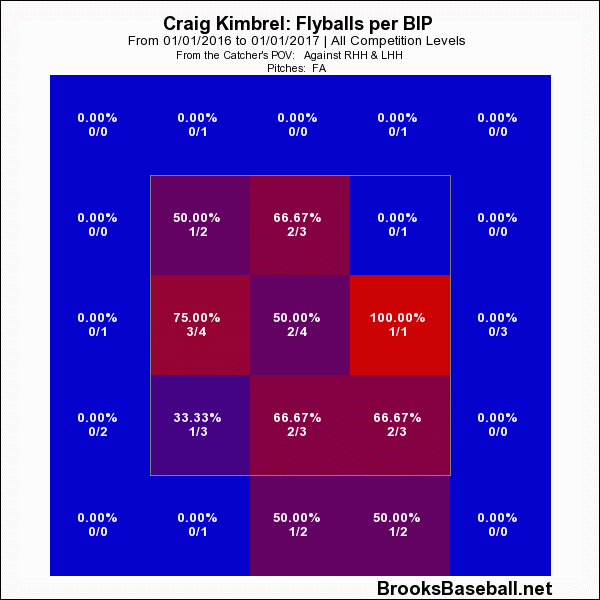 The knuckle-curve, on the other hand, has been far more ground ball-inducing (at 5.50 percent) than the fastball (2.71 percent). As one might expect, keeping that pitch down and on the corners has helped create more ground ball outs. 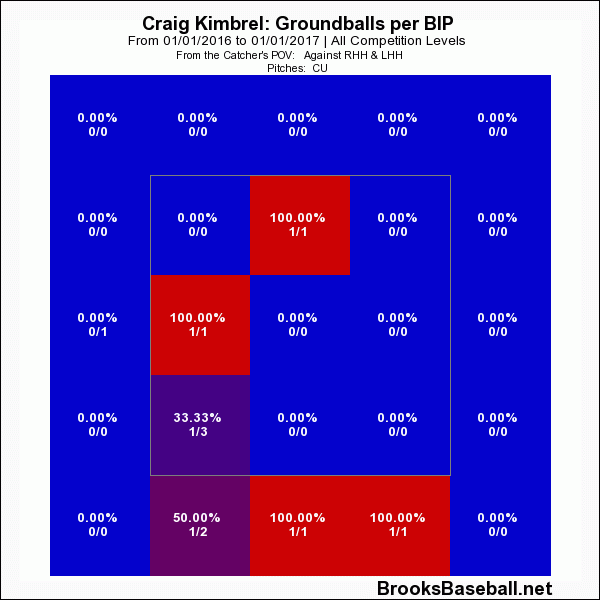 The results of Kimbrel’s pitch selection aren’t necessarily shocking, but it’s something worth noting going forward if either a.) he starts getting shelled again, or b.) that gap starts to narrow as he continues to throw the knuckle-curve more frequently. The latter could help make his success sustainable throughout the season.

There’s so much to discuss with the Red Sox that it’s easy to forget about the steady forces on the roster. After a rough April, Kimbrel has become one of those forces. But Kimbrel has brought more than just consistency to the back end of the bullpen over the past two months, he’s also brought the kind of dominance the Sox were hoping to get from him, and it seems to have taken just a few small adjustments. That dominance will prove beneficial should the Red Sox still find themselves in the playoff hunt come September.