One of the most encouraging developments of the 2016 season for the Red Sox — a season that has been chock-full of them, I should mention — is that Xander Bogaerts has seemingly taken another step forward. Still just 23 years old, Boston’s shortstop was quite good in 2015, but something still appeared to be missing. He wasn’t able to put it all together in a way that could be comfortably described as a true breakout.

In 2016, things feel different. Despite his second-half slump, there’s a different aura around Bogaerts when he comes to the plate, and there’s more reason to feel confident that he will come up big. At least that’s true in the mind of this egotistical writer who believes everyone shares even his most meaningless opinions. Of course, much of that confidence is built off what Bogaerts did in the first half of the season when he was inserting himself into early MVP conversations.

In actuality, his overall offensive value hasn’t been much different from the 2015 season that I was relatively down on compared to the normal Red Sox fan. Through Tuesday’s action, Bogaerts has a .265 TAv on the season. He finished last season with a .266 mark. Heading over to Baseball-Reference, his OPS+ is identical to where it finished last year. On Fangraphs, his wRC+ this year is 113 compared to 109 last year.

Part of the reason Bogaerts’ year feels so much better is that he’s doing it in a more sustainable fashion, with more walks and power than he showed in 2015. However, it’s also because we are humans and thus get sucked in by first impressions. The fact is after his great start to the season Bogaerts has fallen off hard in the second half, giving him another inconsistent year. What now must be asked is how worrisome is this slump, and is he starting to work himself out of it?

Although Bogaerts is still relatively young, we have enough time watching him to know that when he’s going bad, he’s striking out a lot.

In reality, the struggles began in August. I’m sure we could pin down a more exact date, but any way we slice it will involve arbitrary endpoints and choosing the start of a calendar month makes my job a lot easier. That’s what really matters. Anyway, Bogaerts was atrocious in August. In 124 plate appearances in the month, he hit just .219/.274/.325. By wRC+, he was the 13th worst qualified hitter in the month among all major-league hitters. That is not ideal. Those struggles have even carried through much of September. To wit, through his first 13 games of the month, he hit just .196/.274/.321.

So, what’s changed from his hot first half to his lackluster second half?

As far as I can tell, there are two major differences in the shortstop’s offensive profile during his struggles. The first is that he’s simply striking out more. After keeping a strikeout rate that stayed remarkably consistent around 15 percent throughout the first half on a month-to-month basis, the rate rose to 21 percent in August and has remained that high in September. Although Bogaerts is still relatively young, we have enough time watching him to know that when he’s going bad, he’s striking out a lot.

On top of that, he seems to be suffering from some BABIP blues. After spending the first half with well-above average production on balls in play, and July with roughly average production, August and September have seen Bogaerts’ BABIP crash to the .260 range.

So, let’s look a little deeper and try to figure out just why the hell Bogaerts has turned back into this kind of hitter. We’ll start with the strikeouts, because that’s the thing I listed first, so why not? Remember when I said that we’ve seen enough of the young shortstop to be able to identify trends when he’s struggling? Well, guess what pitches he’s struggling against right now. Go ahead, I’ll wait. Ready? No? Then stop reading until you’re ready, you idiot.

The pitch type Bogaerts is struggling against right now is unsurprisingly the breaking ball. Per Brooks Baseball, his whiff rate is way up against curveballs since the start of August, and he’s also seen a significant rise versus sliders, sinkers and splitters, too. Basically, if the pitch breaks, Bogaerts is having some issues against it right now and particularly in August. 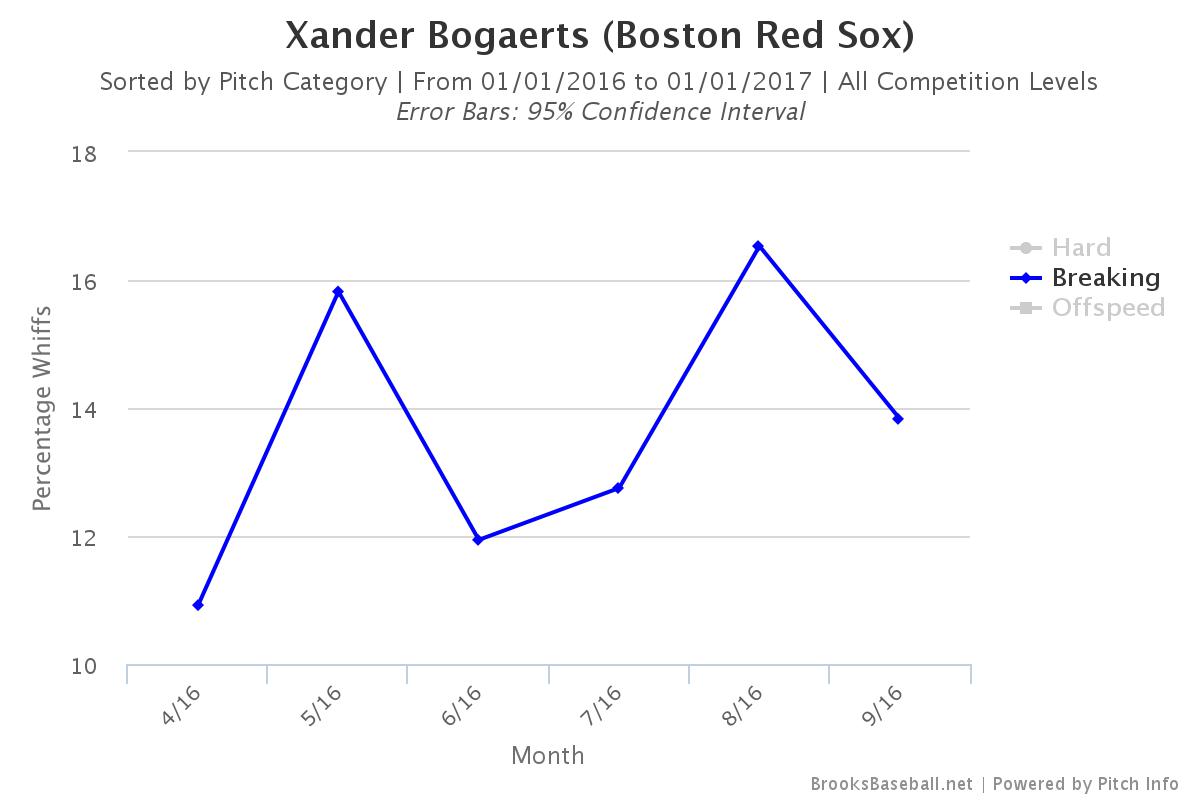 The BABIP issues are a little more confusing, but a little digging makes it easier to understand. To start with, I will acknowledge the luck factor. While we’re well beyond the point of using BABIP strictly as a luck metric, I’m willing to admit there is probably some bad luck involved, just like there was probably some good luck involved with his early season marks. There has to be something more, though. People are starting to look at exit velocity more and more as a mark of quality contact, and thus a predictor for BABIP. In Bogaerts’ case, it doesn’t really work. 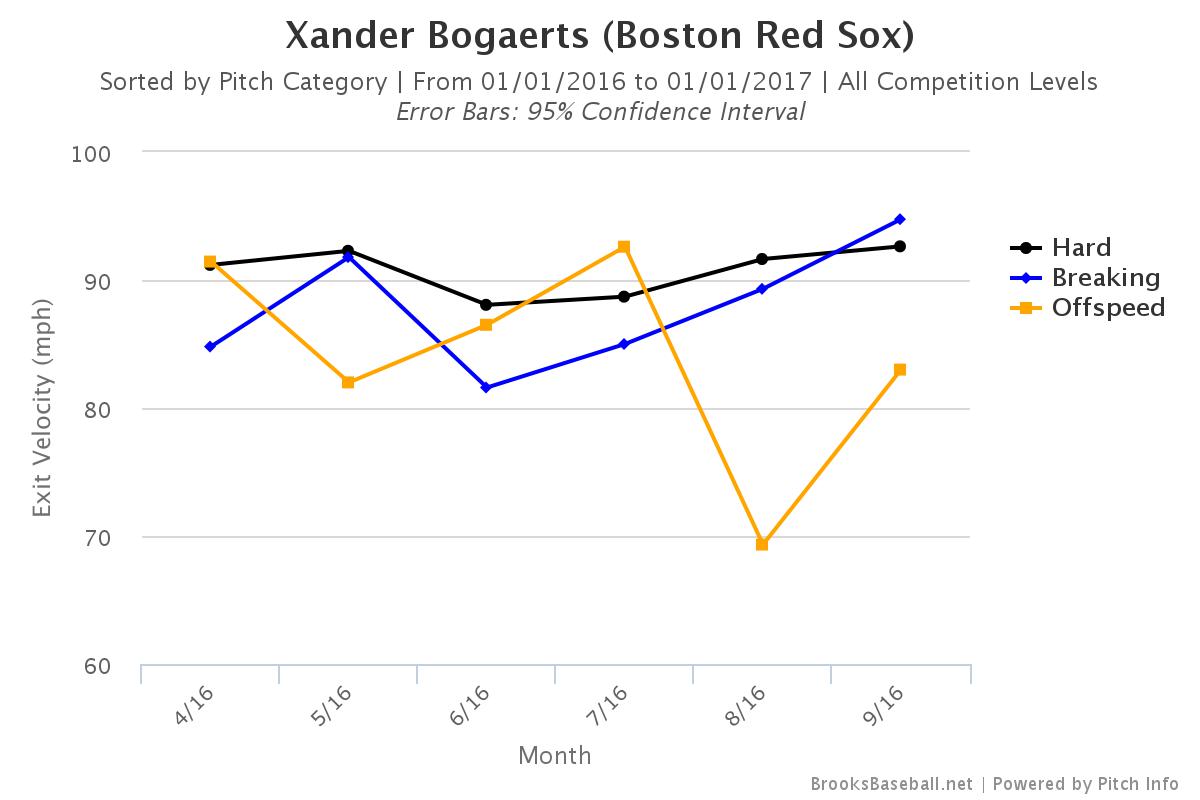 There is certainly a huge dip against offspeed pitches in August, but he doesn’t see enough offspeed pitches for that to entirely explain the dip in BABIP. Instead, where he’s hitting the ball appears to be the bigger issue. Bogaerts thrived on a high BABIP in 2015, and a huge reason was that he was willing to slap the ball all over the field. This was a major reason he was able to get over his breaking ball issues. He did that for much of the first half — while also adding power — but lately his opposite field percentage has gone way down, per Fangraphs. Taking more pitches the other way, particularly tough breaking balls, will solve both of his issues.

The good news is that he appears to be coming out of this slump at the perfect time for the Red Sox. He’s currently in the midst of a five-game stretch with a 1.095 OPS and four extra base hits. More importantly, things are trending in a better direction in September. His whiff rate against breaking pitches is normalizing, as you can see in the picture above. Plus, Fangraphs’ batted ball data indicates he’s also going the other way more.

Bogaerts is already an above-average hitter while playing at a position that doesn’t have many of those. He’s already a fantastic player. The scary part is that he could take another step forward, which is obvious just by watching him. We’ve seen him take that step for months at a time; the final step is just finding that consistency over a full season. I can’t wait to see him do it in 2017.