2016 was especially unkind to Eduardo Rodriguez. Early in spring training, Rodriguez was shagging fly balls, backpedalled for one, got his feet caught up and tripped – and in the process, suffered a subluxation of his right knee. If you’re thinking, “wow, I have no idea what that means but subluxation certainly is an interesting word,” you’re not wrong. According to one of the 520,000 answers that Google provides when you ask it what subluxation means, it’s “a temporary, partial dislocation of the kneecap from its normal position in the groove in the end of the thigh bone (femur). This groove is located between two bumps at the end of the thigh bone called the femoral condyles.” This happened on February 27th, and Rodriguez was listed as day-to-day. All of 94 day-to-days later, Rodriguez finally made his season debut in Baltimore. The lesson here is don’t subluxate your knee if you don’t have to.

Well, Rodriguez originally thought that he broke his knee, so the injury he suffered could have easily been much worse. On the field, there wasn’t a lot of improvement from the 23-year-old lefty. One thing that did improve, however, were his strikeouts. After averaging 7.2 strikeouts per nine innings last year, Rodriguez improved that number to 8.4 in 2016. His K% rose from 18.8 in 2015 to 21.8 the following year. Why could that be? Looking at his pitch usage, Rodriguez moved away from the changeup (which actually wasn’t the best idea – more on that later) just ever so slightly in 2016, only throwing it 16 percent as opposed to 19 percent the year prior. In its place, Rodriguez relied more heavily on his slider, going to it 15.6 percent of the time, a 3.8 percentage point increase from 2015 (11.8). It was clearly a pitch that needed to be refined – batters hit .355 against it in 2015, so adding another dependable pitch to the repertoire was step in the right direction. He also mixed in a cutter “more often,” put in quotes because while the pitch usage technically increased, he still only used it less than 2 percent of the time.

Even in a year that was generally considered a wash, Rodriguez actually put together an impressive final 6-8 weeks. In 77.2 innings pitched from the start of August, he put up a very serviceable 3.24 ERA, 1.13 WHIP and 3.48 FIP. He averaged just under nine strikeouts per nine innings and held batters to a .207 average. Those are all numbers the Red Sox – or any team, for that matter – will take from their 4th starter all day, every day.

The crown jewel of his season came on September 25th, when Rodriguez struck out 13 Rays while allowing one run on three hits in 5.1 (!!!!) innings. The Red Sox won 3-2 in extras when Dustin Pedroia over-slid home but somehow scrambled back in time to be safe, and Joe Kelly registered the win. Weird stuff happens in The Trop.

Primarily, his knee cap temporarily sliding out of place, which is not something knee caps are generally known to do. Even after he came back, Rodriguez was clearly not 100 percent, as was evidenced by the next two months spent owning a 7.02 ERA, 1.71 WHIP and a 6.66 FIP, the latter of which is made even worse because of how especially creepy that is. It’s those eight weeks that explain why, on a surface level, his year looked significantly worse. His BB/9 went from 2.74 to 3.36 and his HR/9 went from 0.96 to 1.35. To put that in perspective, that 0.96 number would have put him among the top-20 qualified starters in that regards for 2016. But 1.35? That’d put him in the bottom-20 worst pitchers. He only threw 107 innings this season, so those final numbers would have been subject to some variation under a normal workload, but it just goes to show you the size of the step back he took when it came to keeping the ball in the park. He generated ground balls 31.6 percent less of the time while his fly ball percentage rose 13 percentage points.

Additionally, it was previously mentioned that Rodriguez sacrificed his change up in the hope of establishing a legitimate slider. While it surely looks like he successfully implemented the slider, Rodriguez’s change up – arguably his most useful pitch in 2015 – wasn’t as sharp. After holding batters to a .184 average against the change in 2015, that number rose to .238 the following year. Sure, .238 isn’t shabby by any means, but the problem with him having a good change up is that he used to have a great one. Of all four pitches he through (I’ll exclude the cutter that BrooksBaseball says he only through 0.8 percent of the time), this is how his changeup fared in 2015:

It would surely behoove him to find that changeup again, as the pitch was far and away his best.

Based on recent reports, it looks like Rodriguez is going to start 2017 in the minors. Dombrowski has come out and said that Wright and Pomeranz are going to round out the rotation, so shouts to him for doing that like literally three days after I suggested that Pomeranz come out of the bullpen with Rodriguez starting.

Surely the idea of Rodriguez starting in Pawtucket coupled with his recent right knee injury scare in Venezuela have the Red Sox suffering from a painful case of deja-vu, which may I remind you is still significantly less painful than suffering from a case of right knee subluxation. Regardless, there are a few ways to look at Dombrowski’s quote. The  sensible view is that that’s the team’s plan, as they do technically have six starters penciled in for five spots, and Rodriguez has options left. Alternatively, could it be meant to light some sort of fire under Rodriguez heading into the spring? Maybe, although that seems less likely coming off the heels of a knee aggravation and ahead of the World Baseball Classic, an event the team will surely ask him to take it easy during if he continues to insist on participating.

Most importantly, if you take a look at how his season season played out last year, it’s clear the biggest thing ailing Rodriguez was a case of being not healthy followed by a case of him being incredibly rusty. Take a look at his pitch charts from before and after August 1st: 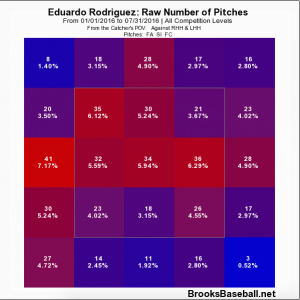 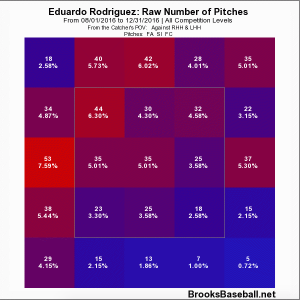 This is the chart of a pitcher who’s trying to shake off some serious rust, and one who needs some mechanical adjustments. Pre-August, Rodriguez was leaving a lot of fastballs over the heart of the plate. He fared much better in the final two months, moving away from the middle of the zone. Now look at his off-speed pitches: 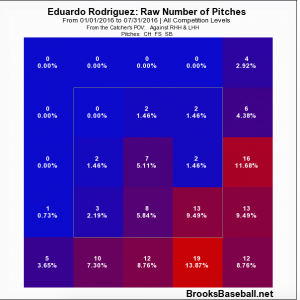 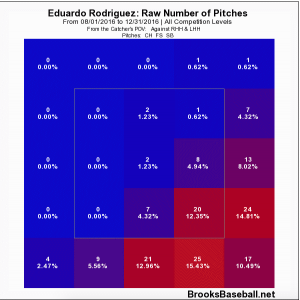 It’s a more nuanced shift, but that second graph shows noticeably better command, especially as a lefty whose changeup tails away from righties and rides in on lefties. It’s this adjustment and subsequent improvement that explains why you can expect Rodriguez to, barring another injury, return to form in 2017 and find his way back into the Red Sox rotation.