So, that last series. What a doozy, huh?

Sure, the Red Sox still look like a team still struggling to employ a consistent offense, but hey, at least they doubled their home run total to a whopping eight dingers, right? A 100 percent increase in round-trippers can’t be bad. And sure, the pitching was putrid at times, but they’ve still got Chris Sale, who pitches again on Wednesday! Silver linings.

All of those things, both good and bad, will unfortunately take a backseat to Manny Machado’s slide and the aftermath. If you haven’t seen it yet – and if you’re reading this, you probably have, so enjoy the refresher – here it is.

In real time, it doesn’t look like much. But as the replay showed, a substantial part of Machado’s cleat landed right on Dustin Pedroia’s calf. I don’t have to describe to you how badly getting cleated hurts. Pedroia had to leave the game, and the Red Sox weren’t pleased whatsoever. Even Joe Kelly was already yelling at Machado by the time Pedroia hit the deck. They had a right to be mad! Losing the heart of your team like that sucks, no matter the situation. It’s a terrible moment for everyone involved. For what it’s worth, Machado later acted and seemed genuinely sorry for the incident, but as you can expect, that didn’t really matter to the Red Sox. No amount of guilt will make him heal faster.

So the animosity lingered. After that game on the 21st, the Red Sox took their time getting back at the Orioles, and the feud peaked once more on Sunday, thanks to Matt Barnes.

Matt Barnes was ejected, Machado doubled on the very next pitch (from Joe Kelly), and no one felt better. While the Red Sox were right to be mad on Friday night, they were completely in the wrong with their actions on Sunday afternoon.

Since this is all stemming from the slide, let’s look at that first. Can you say with complete certainty that Machado was sliding with ill intent towards Pedroia? No, no you can’t. But you can say that the slide was reckless and stupid. Sliding late with your cleat that high is dangerous, and that invokes the Utley Rule (which Pedroia later admitted he didn’t care for).

What added instant fuel onto this fire is the reputation Machado has garnered. Machado is a fantastic baseball player, don’t get me wrong, but the incidents he’s been a part of have been very notable. Here’s a clip from 2014 of him getting pissed off at Josh Donaldson for, well, something, I guess. And then there’s the incredibly stupid thing he did the next day, after Fernando Abad threw way too far inside. Last year, after Yordano Ventura threw some chin music in one plate appearance, Machado charged the mound after Ventura plunked him. Machado is an expressive guy, and he can be a hard player to like if you’re not an Orioles fan, especially if your team sees him as much as any team in the AL East does.

Mix together a very dumb slide, one easy-to-dislike player, and a clubhouse full of angry guys, and what do you get? A distasteful retaliation cocktail. The Red Sox’s anger materialized in Matt Barnes going headhunting, because baseball feuds absolutely have to be settled with throwing at people’s heads. Barnes needlessly escalated it when you could’ve just wrote it off as a very unfortunate accident and moved on. What Barnes and John Farrell said afterwards doesn’t really match up with what happened, since Christian Vazquez’s glove was on the other side of the plate from Machado: 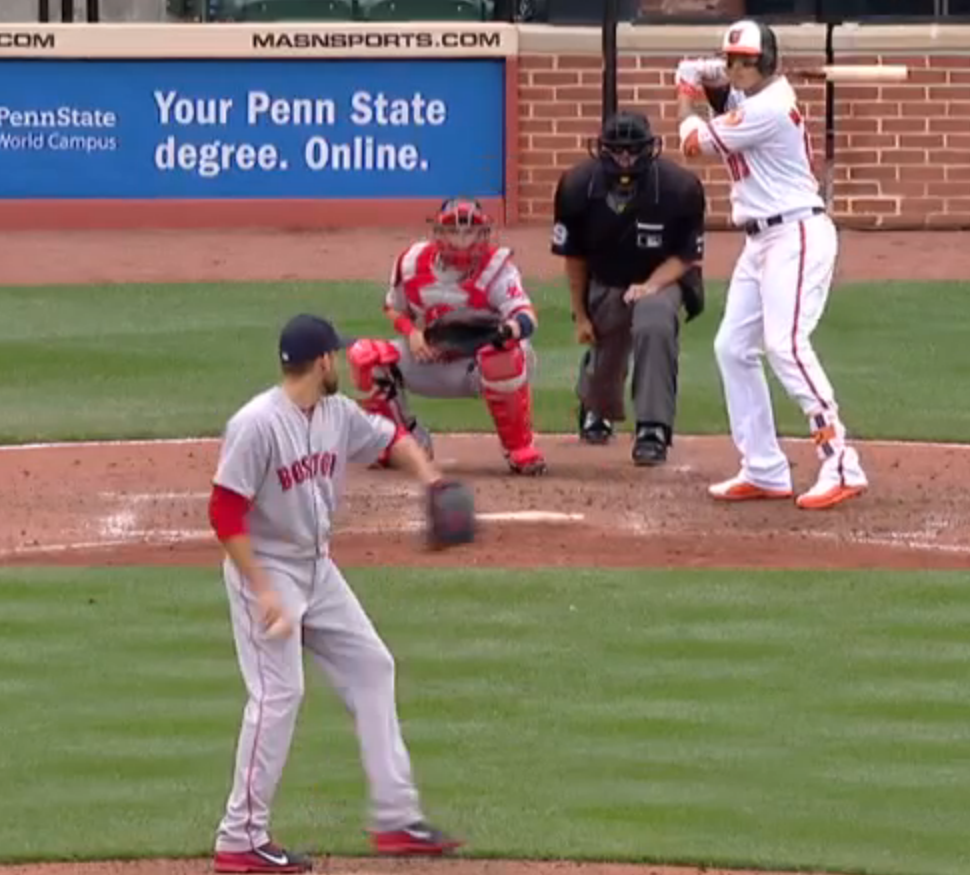 Yeah. That’s not letting the pitch get away from you, that’s aiming for the batter. Barnes won’t ever admit it, and Farrell was “protecting” his guy. Whatever.

You’d think everyone in the organization – and the sport in general – would know not to headhunt, since taking a fastball to the cheekbone was what completely derailed Tony Conigliaro’s exciting, promising career 50 years ago. Hell, look at what happened to Giancarlo Stanton, and to Jason Heyward. The effects of getting nailed in the face by a baseball going roughly 90 mph cannot be understated. And yet players still do it. “But,” say The Unwritten Rules, “you must have revenge on the team whose player inadvertently hurt yours! For honor!” And that’s where everything goes bad.

I’m not going to just spout idioms, because you know them all when it comes to this. You know the second part to “An eye for an eye”. This retaliation fetish that baseball has needs to end. Machado isn’t the evil, Pedroia-hunting entity you think he is, and Matt Barnes isn’t a hero for throwing a fastball at him. To Pedroia’s credit, he was the only one to act like an adult in all of this, and even told Machado that he wasn’t a fan of Barnes’ actions:

Fascinating exchange captured by MASN between Machado and Pedroia. Dustin clearly saying "It wasn't me. I know that and you know that." pic.twitter.com/oqdt827ER9

The two made up the night of the slide, but that obviously didn’t matter, so Pedroia had to publicly call out a teammate. He’s very much in the right to do so, since, y’know, he’s the guy that actually got injured by Machado in the first place. If he didn’t want retaliation, then why the hell did Barnes attempt it?

Look, this feud, spat, whatever you want to call it – it’s incredibly idiotic. Sparked by a dumb, bad slide and carried on by dumb people with bad intentions. Throwing at people is never okay in any circumstance, and I cannot believe we still have to keep saying that, but here we are, seeing garbage like this in 2017. Barnes should be suspended for this, and I wouldn’t be surprised if MLB makes an example of him and brings down a hefty punishment. There’s no place for something like that in this sport.

The unwritten rules are bullshit. Stop following them, stop intentionally hurting others, and play some damn baseball.