This past weekend my eight year old had a sleepover with one of his friends. It was the first sleepover for both of them. At 9 PM his mom texted me to see how the boys were doing. I put my ear to my son’s door, didn’t hear anything, and wrote back telling her they were asleep. She replied something along the lines of “great! thanks!” Moments later I heard a bit of giggling, opened the door and both boys were standing naked on their beds. This is not unlike the Red Sox rotation. Let me explain. You think you have things figured out, you think you know where things are going, then you open the door and the Red Sox rotation is naked and jumping on the bed.

After months without David Price, months without the full rotation, months without the supposed strength of this Red Sox team healthy and on the field, David Price returned. He returned! Then Eduardo Rodriguez fell in the bullpen, gave up four homers to Baltimore, and went on the DL for, best case scenario, the next month. *sigh* So now we’re back to four healthy starters, and sadly, if Price were able to match what Rodriguez did before the four homer evening in Baltimore, a 2.77 ERA, for the rest of the season, well, that would be impressive. In other words, the best the Red Sox can hope for right now, realistically, feels like standing still.

So let’s see what the Red Sox have in the Price-for-Rodriguez trade that sort of accidentally happened. Price has made two starts and thrown a combined 12 innings. That’s not much of a sample size to go on, but even with that said, it’s remarkable how similar what little Price has done this season is with what he did last season. His strikeout percentages are only separated by 0.4 percent, and his walk percentages by 1.4 percent (that’s not much in 12 innings). Even his average innings per start are separated by a bit over one third of an inning. Two starts into his 2017 season and his 2017 season looks a lot like his 2016 season.

No other AL contender can match that kind of one-two punch in their rotation, and to date, no other AL reliever has been remotely as good as Kimbrel.

Even though the Red Sox were hoping for the 2015 version of Price when they signed him, the 2016 version would probably suffice at this point. If Price can be an above average starter who eats innings for breakfast, lunch, dinner, brunch, brenner, and lunfast, given the composition of their rotation, the Red Sox would surely take that. But the promise of a 2015 David Price still looms, and that, combined with the 2017 Chris Sale, backed by the 2017 Craig Kimbrel, is enough to make Boston an AL favorite going forward. No other AL contender can match that kind of one-two punch in their rotation, and to date, no other AL reliever has been remotely as good as Kimbrel. That’s a heck of a good starting point when you’re trying to get to the World Series.

But is the 2015 version of Price still in there? Maybe so. It’s so hard to extrapolate from just two starts, just 12 innings, without being irresponsible. For example, after Price gave up a billion runs in two rehab starts to a bunch of Triple-A hitters, did you think it was a good idea to bring him up to the majors? I didn’t. I might have even gone so far as to call it a bad idea, but my column didn’t fall on that day so I was spared that particular ignominy when Price came up and pitched very well in both his starts.

However Price’s numbers so far don’t show dominance. The strikeouts are good, not great, the velocity was up a bit in his first start, but back to 2016 levels (i.e. down a bit from 2015) in his second start. That’s understandable given his first start was his first start back since his injury and he was probably pretty amped up. His home run problem from 2016 is, at least through two starts, still there, though looking at league-wide home run data it seems he’s not alone.

David Price’s dominance never rested on velocity alone though. Price had that rare ability to not only throw hard but to spot his pitches where he wanted them. He spots his four seam fastball, then he fools the hitter with his cutter and changeup. One thing you can see by comparing his 2015 season to his 2016 season, is his fastball location changed. Price went from throwing the fastball over the middle of the plate to throwing it on the corners much more. When you look at the jump in slugging percentage from 2015 to 2016 that Price gave up on fastballs over the middle of the plate you can understand the reason for the change. For whatever reason, be it the very slight drop in velocity or something else, batters were teeing off on Price’s fastball over the plate and he simply couldn’t justify throwing it there anymore.

At least in terms of strategy, that change seems to have continued into his 2017 season. Price is still trying to stay out of the middle of the plate. If his elbow allows him to continue to command his pitches, that’s fine, he can cope with the subtle effects of aging as well as the back-and-forth of the pitcher batter matchup from year to year, but if his elbow isn’t right and prevents him from commanding his fastball the way he needs to, then there’s a problem. Price can’t get away with throwing heat over the plate anymore, but to my eye, there were more than a few pitches that leaked out over the plate. I rewatched his second start which came against Baltimore and there were more than a few to pick from. In Manny Machado’s first at-bat, Price threw a fastball that was supposed to be low and inside. Look at the catcher’s glove and you can see where he’s calling for the pitch to go. Price tried to throw it there, but… 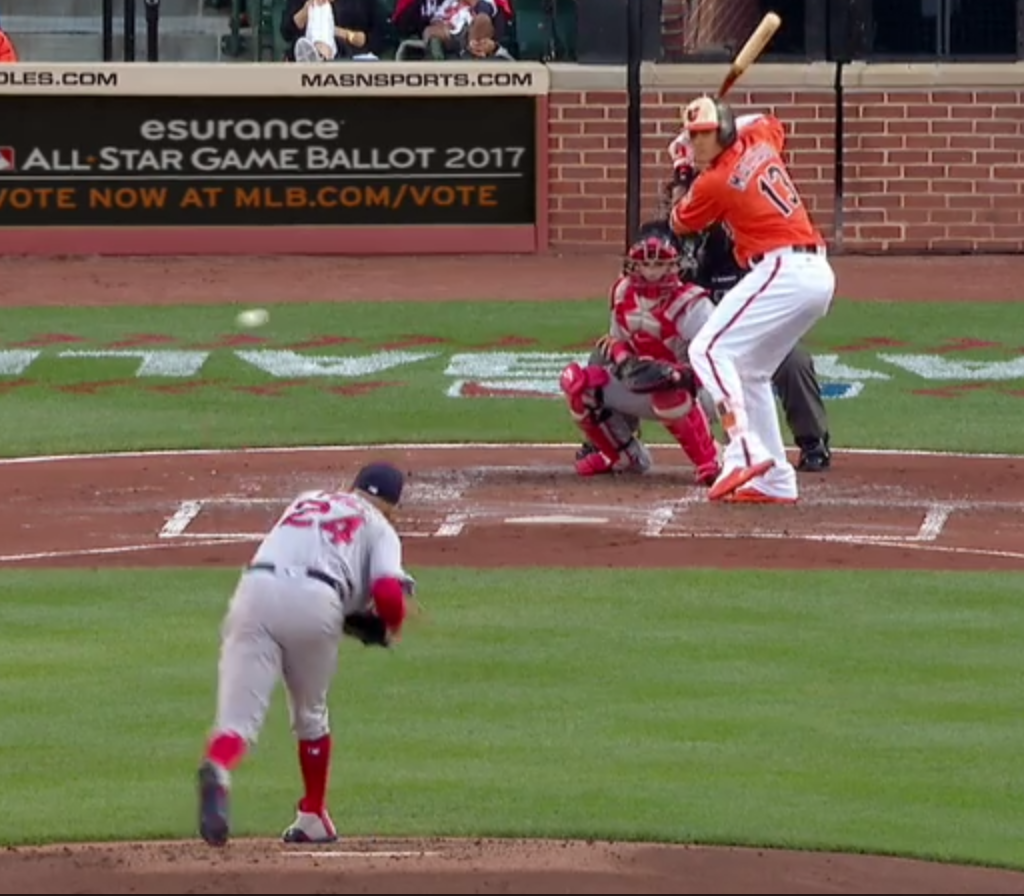 …instead it ended up middle middle. 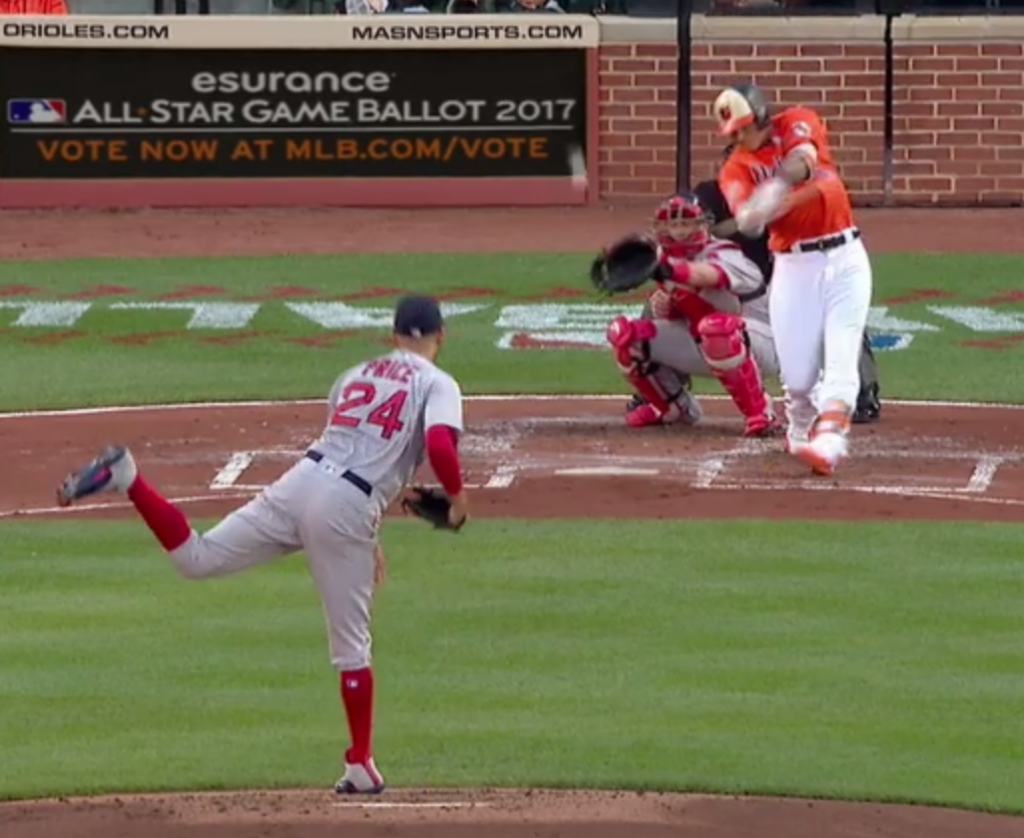 Fortunately Machado fouled it back, then struck out on a slightly elevated cutter. Then, in the very next at-bat, there was one to Mark Trumbo. Just like against Machado, this pitch was supposed to be low and away. Again, look at Vazquez’s glove. 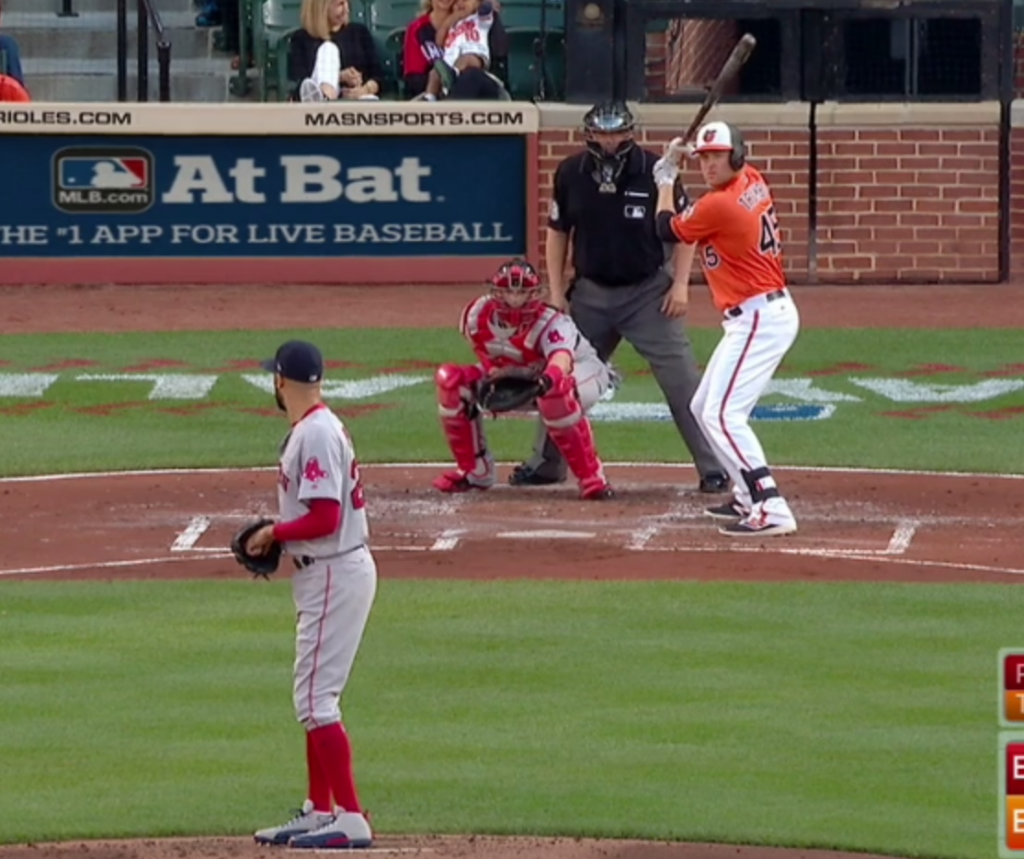 But Price misses his location and the fastball ends up over the middle of plate. 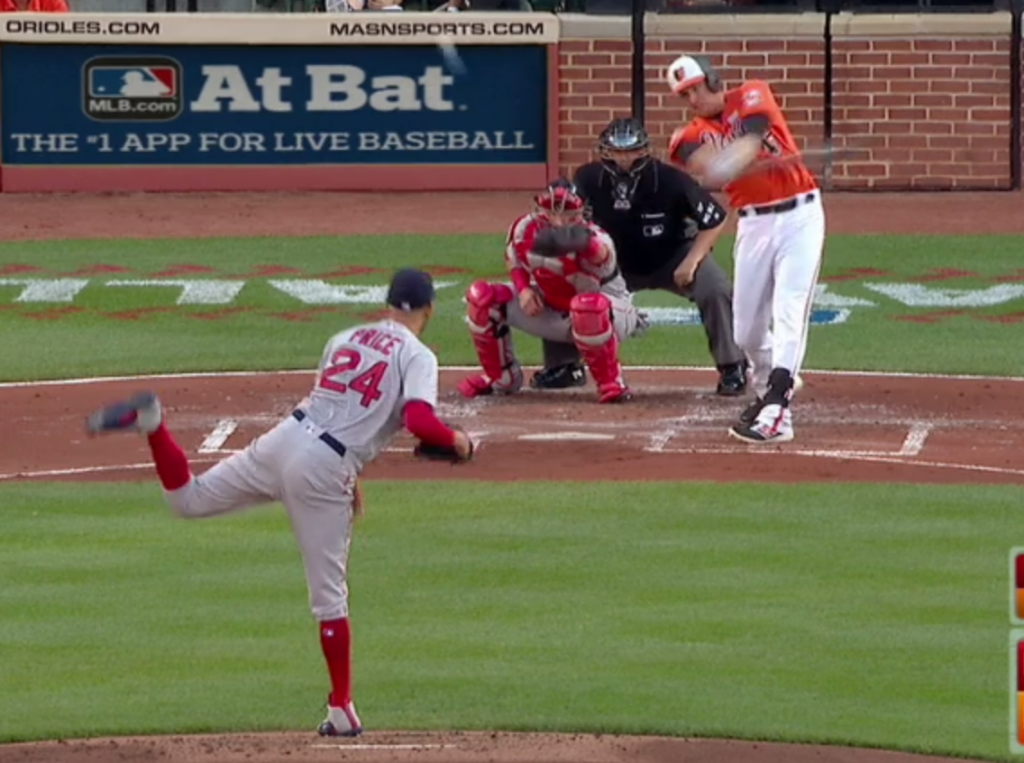 Fortunately again Trumbo fouled it back.

Pitches like that aren’t going to be home runs every time, and Price is but 12 innings into his season so there is undoubtedly some rust still to work off. However, if Price isn’t able to command his pitches like he has in the recent past, expecting him to be the co-ace of the Red Sox rotation heading into October might be asking too much. Fortunately though, we’re not there yet. Through two starts, David Price has both good velocity, his health, and he’s David Price. Those are all very good starts. It seems now we have a good idea of where this is all going, of where the Red Sox and Price stand. But let’s check the kids bedroom first, just in case.