Chris Sale just finished one of his more pedestrian months of pitching in a Red Sox uniform. By the vast majority of statistical measures, he actually pitched worse in May than he did in August, but we’re not going to get a little thing called overwhelming numerical evidence get in the way. When taking a look at why he might have struggled in August, one thing pops out almost immediately: 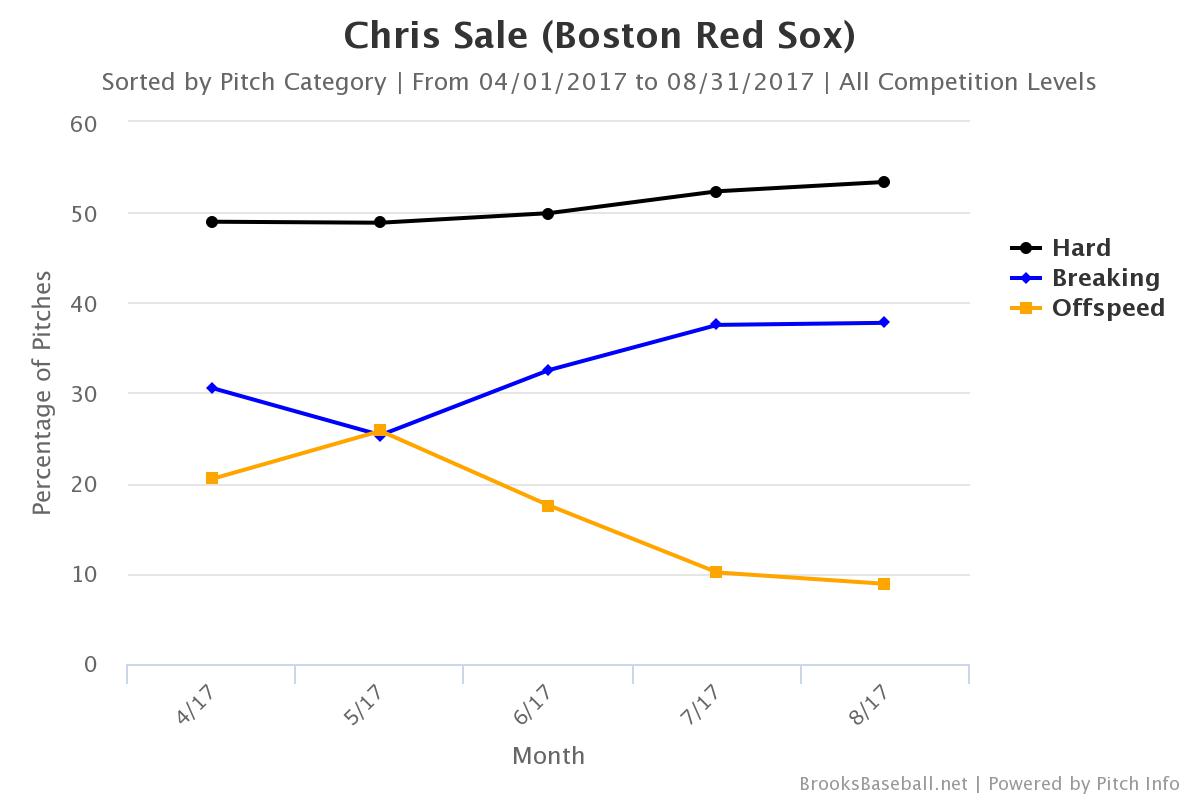 Right there, you’ll notice that there’s been a pretty dramatic downtick in the amount of off speed pitches that Sale is throwing. If you boil this down even more, you’ll see that the change up is what’s really getting scrapped: 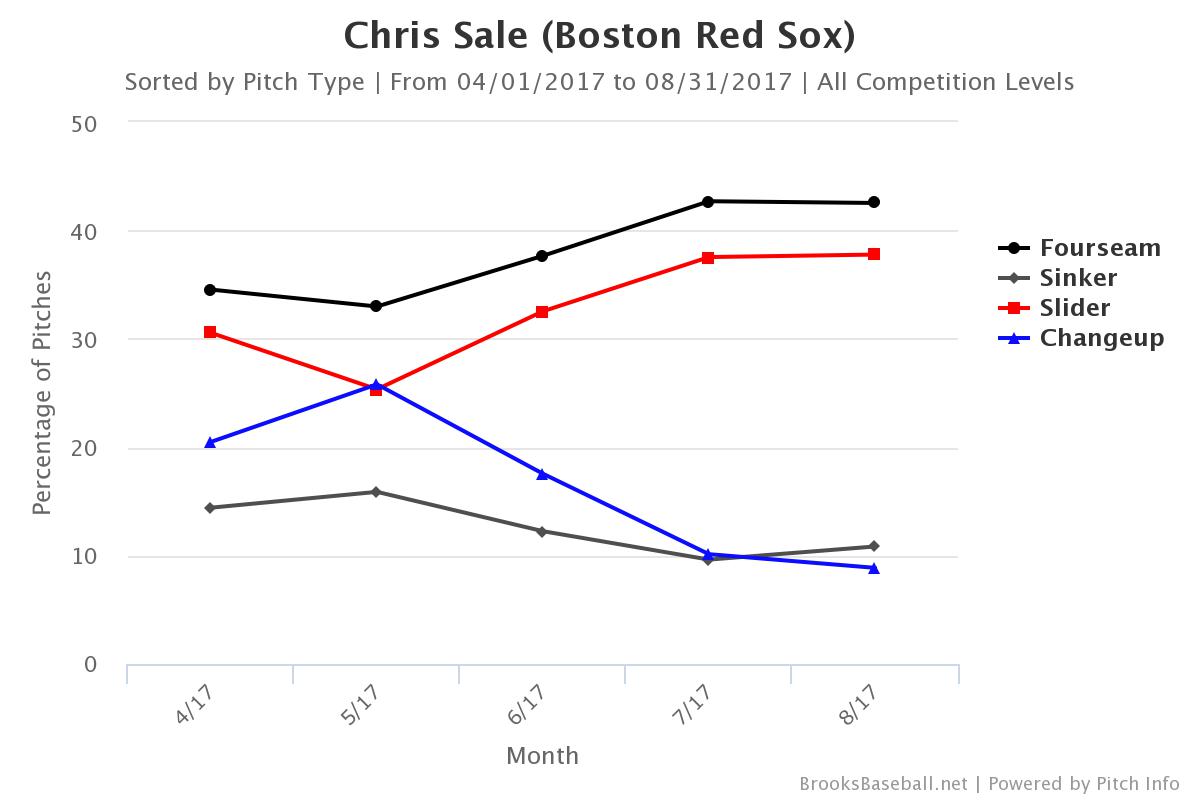 That’s a pretty sharp drop off. As the season’s progressed, Sale has morphed more and more into a two-pitch pitcher. Granted, they’re two amazing pitches, but still – the ratio at the beginning of the season paints a better picture than the one at the end. It’s a shame considering that, at its peak, Sale’s changeups is one of the best pitches in baseball:

Per @fangraphs pitch value stats, Chris Sale has the 2nd-most valuable fastball and 4th-most valuable changeup in MLB this season

Currently, Sale’s changeup is hovering right at 14th-most valuable, which is obviously quite a ways away from fourth-most valuable, but still pretty impressive. As the season’s progressed, however, not only has he thrown it less, but hitters have adjusted. Here’s how frequently batters have been swinging against the changeup this season: 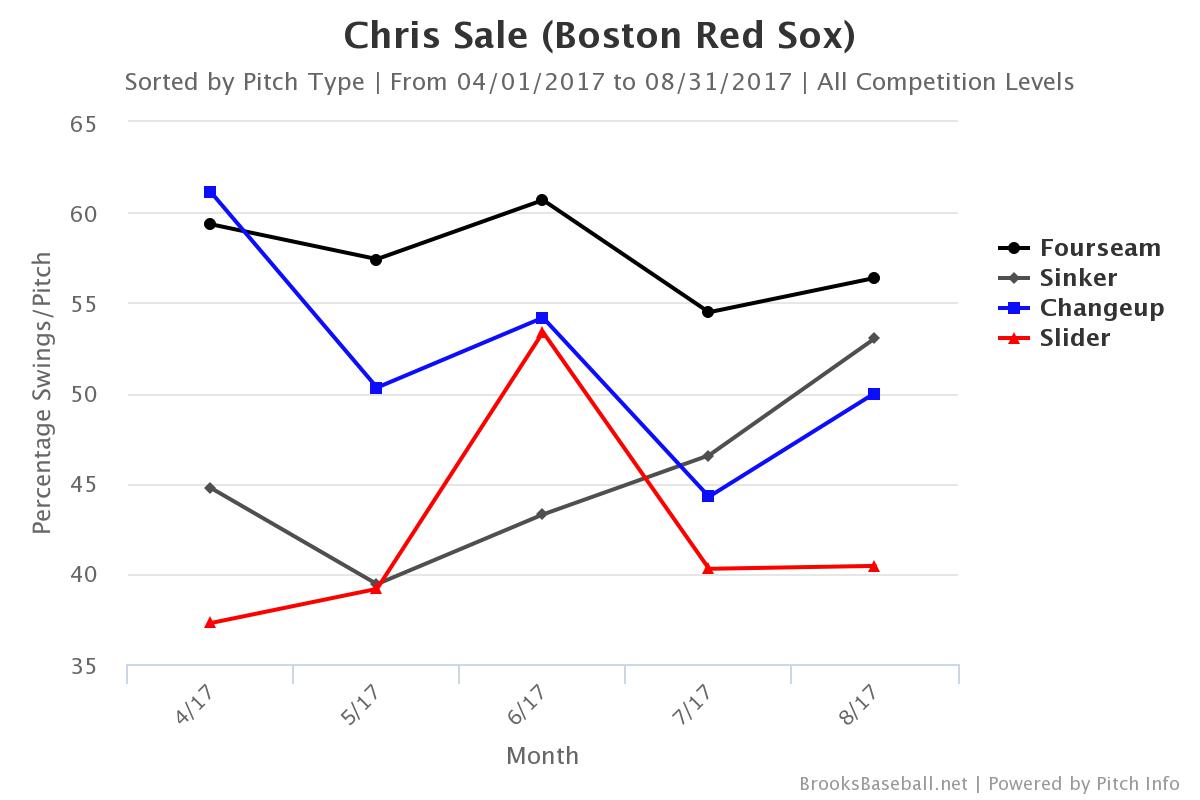 And despite being more selective, here’s how hitters are making contact against it as the season’s gone along: 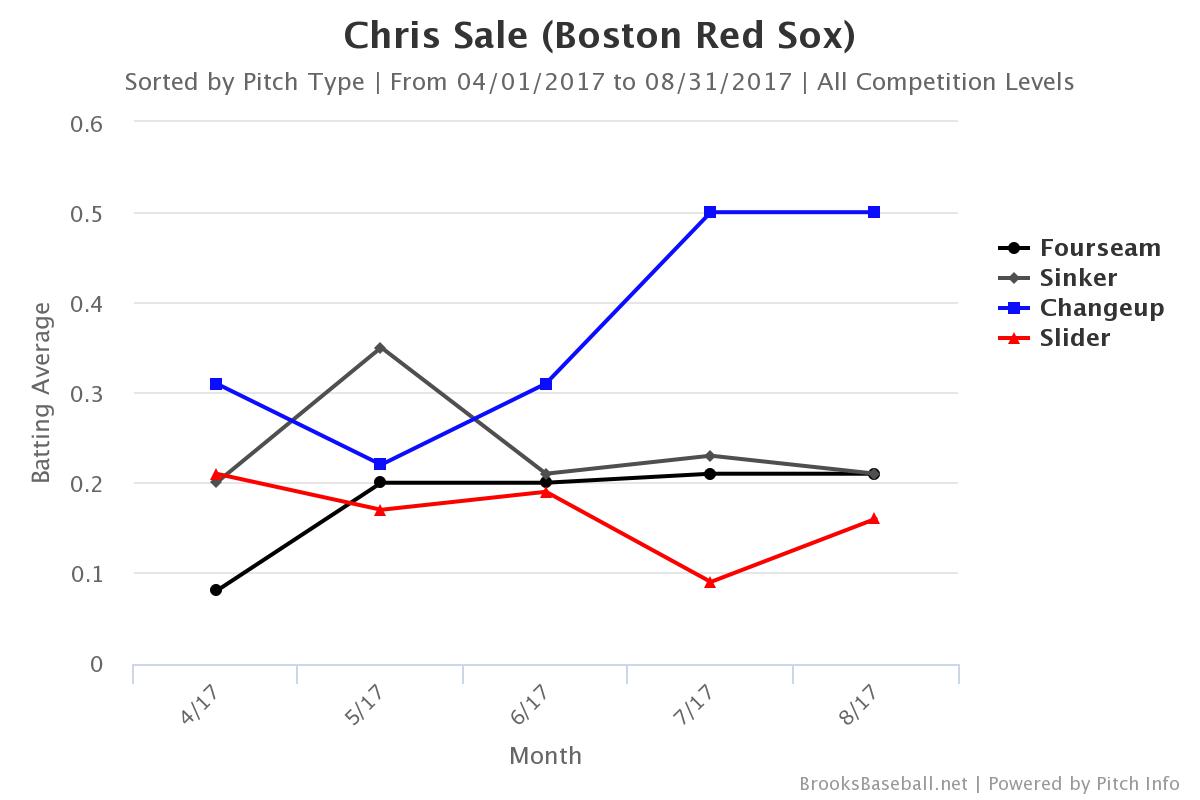 So, it’s pretty clear that hitters have adjusted to the pitch. Is that the sole cause of Sale’s August issues? Probably not; Sale was well into abandoning the pitch during July, one of the best months of his entire career.

What’s more interesting is that over the last two months, Sale has abandoned the changeup almost as quickly and dramatically as any time in his career: 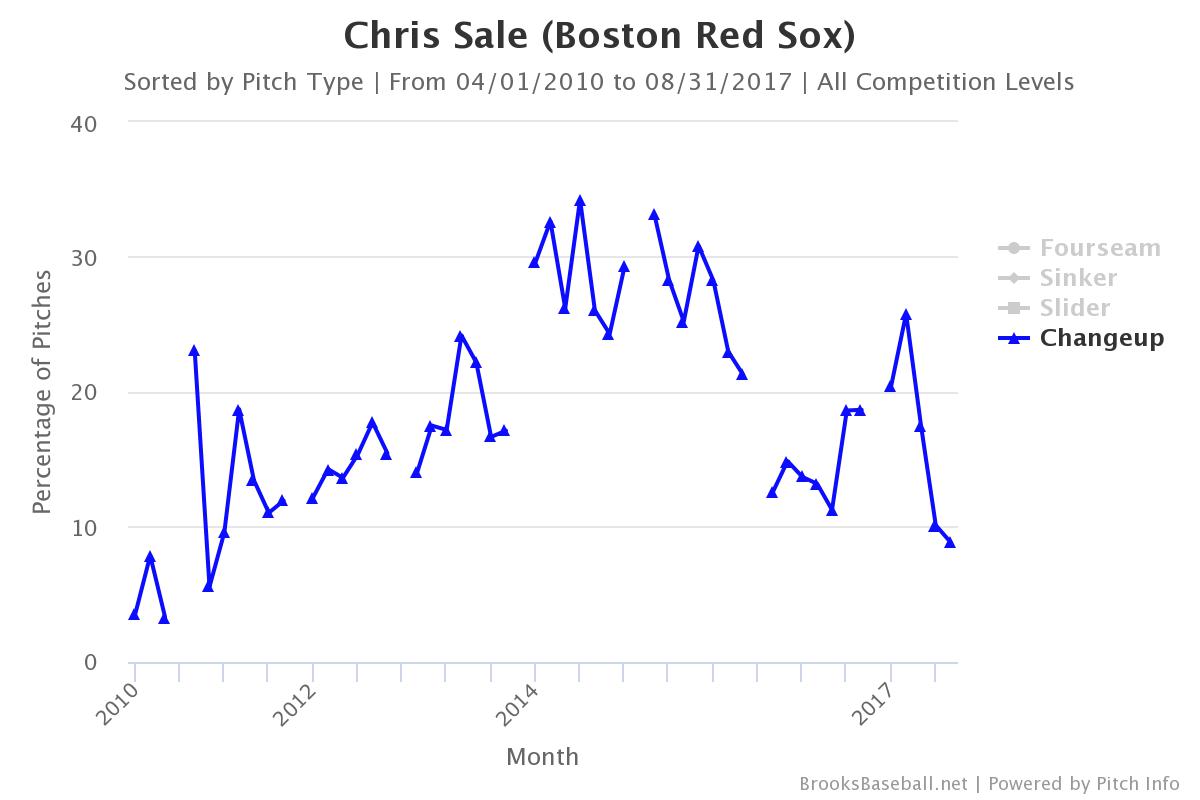 After starting the season by throwing the change anywhere between 20-25 percent of the time, Sale has since scaled back, now choosing to throw it less than 10 percent of the time. Given that for the first two months of the season, his changeup had the highest whiff percentage of any of his four pitches, it seems surprising that he’d give it up so quickly. Then you take a look at how well he’s been throwing it lately, and things start to make a bit more sense: 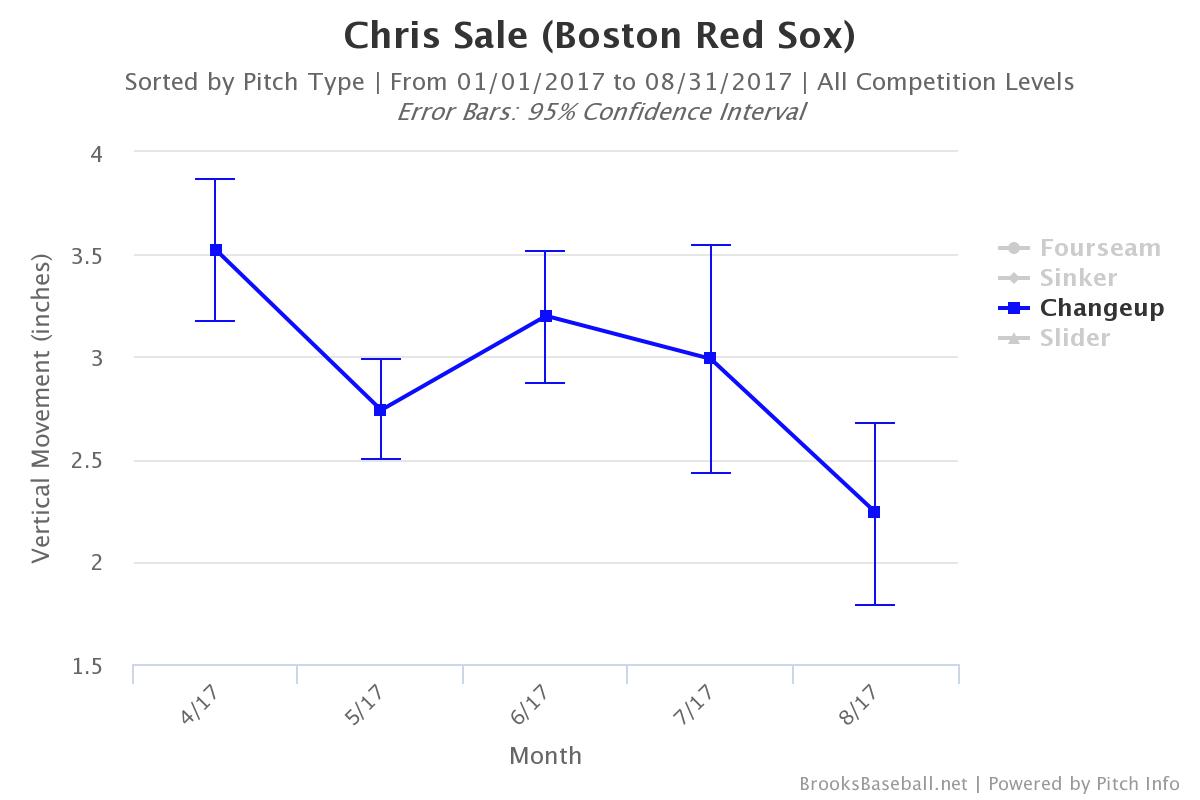 His changeup is currently as flat as it’s been all year, and I’d imagine that Sale might be the first person to tell you that. Whether it’s Sale not having a feel for his changeup and abandoning it or hitters adjusting to the pitch and scaring him away from it, Sale’s left his changeup in the dust. It worked for him in 2015, so who’s to say it won’t work for him now? I’m not panicking, you’re panicking.