We’ve now gone far too long without me writing about the Red Sox bullpen, and that needs to be rectified. Much to my chagrin, this has been an incredibly uninteresting group in Boston. They have a couple of nice arms, of course, but overall the bullpen hasn’t been trustworthy, hasn’t been dominant and generally hasn’t been exciting. At the same time, it’s been solid enough for most of the year that it’s been able to hide behind the poor performances ofthe rotation and lineup. Now that the team is starting to turn things around ever so slightly, it’s becoming more obvious how shallow this unit is. Depending on how the trade deadline goes, it could need a massive overhaul before the 2016 season.

If the Red Sox can’t turn it around completely by the trade deadline, the bullpen could be the focal point of their strategy in late July. Most of their other chips carry such little value that, if they want to get a relatively significant return in a deal this year, one or both of Koji Uehara and Junichi Tazawa would need to be dealt. However, both players are also under control for 2016 at prices that won’t stop the Red Sox from shoring up other areas. If the team decides the most value they can provide comes as trade chips, there will be a lot of work to do over the next nine months to rebuild a broken bullpen.

First, we’ll look at the scenario in which both of these guys are dealt. In this case, the team would need to find a new relief ace plus at least one other dependable option. In the days of shorter starts and a more specialized bullpen, having at least two potentially dominant relievers is hugely important, and typically teams like to have three options back there. Just look at the Royals and their three-headed monster of Greg Holland, Wade Davis and Kelvin Herrera. Unfortunately for the Red Sox, those kind of guys likely don’t exist in the organization right now.

In the days of shorter starts and a more specialized bullpen, having at least two potentially dominant relievers is hugely important.

The first job would be filling the closer role, but that could be easier said than done. The trade market is always unpredictable in the offseason, and that goes double for relievers. Ben Cherington hasn’t had a ton of success in these kind of trades, either. As such, I’ll just look at the free-agent pool, and there are a few closer options right now. Specifically, we’re talking about Tyler Clippard, Joakim Soria and Santiago Casilla. They have all been very good this season, and all have a track record of success. However, they are going to cost a lot of money on the open market, and it’d be somewhat surprising to see Boston shell out the kind of money it will take for a reliever of this caliber. Because of this, I can’t see both Tazawa and Uehara being dealt this year, even if the Sox go into rebuild mode.

Now, if we assume at least one of them is hanging around, the top goal is finding a new primary setup man. Once again, there is no one in the organization who has earned that kind of role just yet. That’s not to say it won’t happen, but the Red Sox can’t go into next season just hoping it will. Luckily, there are a few intriguing names in free agency. Jim Johnson has bounced back in a big way after a rough 2014. Shawn Kelley has always posted strong peripherals, and could be had for cheap in the hopes that the results finally start to match that. Darren O’Day has dominated in Baltimore for years. Guys like Jonathan Broxton and Chad Qualls could be available depending on what happens with their options. None of these names are particularly exciting, but they also have much better track records than the players Boston currently has.

The problem right now, though, is after the top two of Uehara and Tazawa, Boston’s bullpen has been remarkably inconsistent. As I mentioned above, it’s nice to have a third option in the back of the bullpen, and one is severely lacking right now. With that being said, there are some options who can blossom into that guy. Matt Barnes’ stuff hasn’t been as dominant as many anticipated with his shift to the bullpen, but maybe one more offseason working out in this role can fix this. If Joe Kelly doesn’t stick in the rotation, maybe we could finally see how his stuff looks in the bullpen, and hope for a Wade Davis-like transformation. Alexi Ogando has looked much better lately, and while his peripherals tell a different story, he’s probably the best bet at this point, at least of guys who have already spent time in the major-league bullpen. Guys like Heath Hembree, Jonathan Aro and Dalier Hinojosa have outside shots as well. 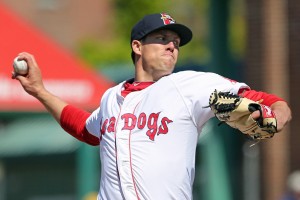 The most intriguing name, however, is Pat Light. The former 2012 first-round pick had been starting for his pro career up until this season. Now that he’s being allowed to let loose in short stints, he’s shown dominant flashes. The transition has taken him from organizational fodder to a legitimate prospect who could help later in 2015. He’s been able to get his velocity up to the triple digits on a few occasions, and scouts see a back of the bullpen ceiling for him. If anyone will come up from the organization to become dominant next season, he’s likely the best bet.

Finally, the Red Sox still need to find one more left-handed reliever. It’s been a problem for them since they traded Andrew Miller last summer. Tommy Layne continues to shock a ton of people with his success, and has definitely carved out a role for himself as a true LOOGY who inexplicably dominates at time. The team still needs one more option, and it’s not around right now. Robbie Ross Jr. has been a failed experiment this season, and it’d be hard to see him starting 2016 on the roster. An intriguing in-house option would be Henry Owens in 2016. Obviously, the hope is still that he’s a starter long-term, but if the rotation is full, would he really benefit from another year in Pawtucket rather than getting major-league experience? We’ve seen the reliever-to-starter development method work before with guys like Chris Sale. It’s something to keep in mind, at least. If they decide to look elsewhere, free agents Tony Sipp, Manny Parra and James Russell could be intriguing.

Although it won’t be the primary focus, the Red Sox need to rebuild their bullpen next season if they want to be contenders in 2016. Depending on what they do with Uehara and Tazawa, it could be anything from a massive overhaul to a minor retooling. Whichever the case may be, they’ll probably need to look outside the organization for a few of those additions, but the names are out there in free agency. Good teams have multiple options at the back of their bullpens, and the Red Sox are falling behind on that front. If they’ll find it in the organization, there’s a good chance that will come in the form of Pat Light.

The rotation is only full if the Sox don’t trade one of their underwhelming starters. Sure, a guy can go from reliever to starter (Sale), but it can also end up as a disaster (Daniel Bard).

Yes, letting Miller sign with mfy not only thinned this Pen to mediocrity, turning him over to the MFY was a strategic blunder. Replacing him will continue to be Ben’s toughest job. But surely Some combination of Workman, Kelly, Light, Diaz, Aro, Hinojosa, Johnson, Spruill, Owens, Couch, Wright will replace the front end of this sad group; and surely one or two top arms will be signed. And just as surely these improvements will be added to Koji and Junichi. No more failed addition by misguided subtraction. And yes, Paps would be a good answer, with Koji, Junichi and Pat Light behind him.