Last night, the offense teed off on a young pitcher and the back end of the Toronto Blue Jay bullpen. Twelve runs is a nice way to avoid more questions about the starting rotation, and indeed the Red Sox offense has working to evade such questions for a while. In June, Boston was seventh in baseball in runs scored. That’s not bad for a team last in the same category the previous month. Yet even as the offense rounds into form, there are some tough questions remaining that, believe it or not, don’t include the word “pitcher.” The most vexing of those includes the words “first” and “base,” because what is going on with Mike Napoli? Further, the fact that Napoli’s contract is up at the conclusion of the season creates some interesting possibilities in terms of what the the Red Sox can do about first base now and into the near future.

We’ll start with what we have. Mike Napoli’s brutal start to the season seemed to conclude in mid-May with an equally brutal stomping of the Rangers, followed by a personal takedown of the Angels. Napoli took the opportunity to resuscitate his season against his previous employers, hitting .429/.500/1.190 in six games against them. That last number is not his OPS, it’s his slugging percentage. It looked like the Napoli of 2013 was back, and the Napoli of 2011 was taking occasional ABs too.

But then the Angels and Rangers left town and the good versions of  Napoli left with them. Since those series, Napoli has hit .193/.299/.303: bad for a glove-first utility infielder, horrendous for a slugging first baseman. But it gets worse. Don’t count those six games against Texas and Anaheim, which you can’t do, but which I’m doing anyway, and Napoli is hitting .177/.284/.292 on the season. That last number is his slugging percentage, not the number of fans willing to pay his way out of town on any given night.

Despite the lack of production, it’s hard to say Napoli’s skills are gone forever, especially while remembering what he did to Anaheim and Texas. But it’s equally difficult to imagine a contending team carrying a first baseman with a .670 OPS who, to date, has been roughly replacement level depending on the WARP-like metric you choose. I don’t know the Red Sox’s plans of course, but as they struggle to get back into the overly forgiving AL East race, one would think the date for Napoli to either snap out of it or lose his job is fast approaching.

As the Red Sox struggle to get back into the overly forgiving AL East race, one would think the date for Napoli to either snap out of it or lose his job is fast approaching.

If he does snap to and OPS .800 the rest of the season, then great. His season numbers will still look bad and it’s tough to imagine the Red Sox re-signing him at this point, but at least they’ll have received something for their money and patience. But if he doesn’t? The Red Sox are rather limited in that eventuality. They could play Brock Holt there, but that seems a waste of the multi-positional talents of \o/. They could move Hanley Ramirez there, but that seems more like an idea than something that could actually happen, like quarks, time travel, or peanut butter with bacon in the same jar. They could move Sandoval to first, but now we’re creating long term problems that don’t really solve short term ones.

The most likely player to replace Napoli as the Red Sox’s starting first baseman this season isn’t on the 40 man roster. That’s Allen Craig. Currently in Triple-A, Craig is getting on base at an over .400 clip, but with just nine extra base hits in 177 plate appearances, the power that marked his time in St. Louis appears to be gone. If Napoli continues to scuffle Craig may get another shot in Boston anyway, but even so, he hasn’t done much to date to push his way back into the Red Sox long-term picture at first base.

The same can be said about Daniel Nava, who began a rehab assignment just last night but faces an uphill climb to reemerge on this roster thanks to Alejandro De Aza. 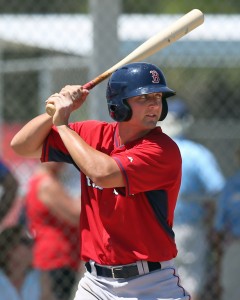 Beyond that, they have Triple-A first baseman Travis Shaw who would likely be stretched as a major league regular given he’s slugging .373 in Pawtucket. And that’s kind of the heart of the problem. There isn’t really anyone else. Shaw is 25 and it doesn’t look like it’s going to happen for him, at least in terms of becoming a major league regular. Sam Travis just moved up to Double-A Portland and he has some promise, but he’s not going to fix the first base problem for the 2015 Red Sox. There’s a chance Travis could end up as a major league first baseman down the line, but that’s not happening this season or, very likely, next either. The system has some hitters further down, but nobody who is ready to make the jump to the majors and help at first base.

As for trade market, it’s difficult to imagine the Red Sox front office going in deep on this team right now, though things could change in the next couple weeks should they go on an honest-to-goodness winning streak. Conceivably the Brewers could make Adam Lind available. Lind is having another nice season at the plate and has another option year left under his contract. Beyond him the most intriguing free-agent-to-be is probably Chris Davis of the Orioles, and as long as Baltimore is close to first place, that would seem unlikely. Davis will be a free agent after this season, but he’ll likely cost more than Boston will want to spend in dollars and years. Even looking two years into the future, the market only offers Edwin Encarnacion, Pedro Alvarez, Justin Morneau, and *gasp* Mark Teixeira. How crazy would that be?

Perhaps the Red Sox could make a blockbuster move and acquire someone we don’t currently think is available, like a Joey Votto or Paul Goldschmidt. Votto is having a fine season but there’s no way the Red Sox want to be paying him through 2023, and asking about Goldschmidt is just asking to have your ear rung after whomever answers the phone in Arizona slams it down upon first hearing the word “gold.”

As for this season, I like the idea of acquiring Lind, but you have to think so will other teams so the price may be steep. Still, if Napoli hasn’t turned it around and Boston is in it at the deadline, acquiring a first baseman who slugs .500, gets on base, and with one more season under contract at $8 million could go a long way towards fixing first base both this season and next.