One of the silver linings of the last month of the year for bad teams is the hope that comes with September call-ups. Unfortunately for the 2015 Red Sox, there aren’t a lot of exciting prospects that will be making their debuts this month. Of course, part of this is because so many of their top young talents have already debuted. We’ll still be able to watch guys like Eduardo Rodriguez, Henry Owens, Blake Swihart, Mookie Betts, Xander Bogaerts and Jackie Bradley Jr.: it just won’t be during their debuts. The next wave of talent is still far off, with Manuel Margot at Double-A being the closest prospect to the majors at this point. With all of that said, Boston will still take advantage of their extra roster spots. Even if they’re not top prospects, there are still a few interesting names that will be brought up this month, or have already been called up.

Here we have someone who is definitely not a prospect, but is far and away the most interesting player who’s up with the Red Sox this September. Craig was half of the return from the disastrous John Lackey trade, and played so poorly after coming to Boston that he was sent to Triple-A Pawtucket after just four months with the team. He racked up 166 plate appearances between the end of the 2014 and the start of 2015 and he managed a microscopic .427 OPS in that time. Four qualified batters have a higher OBP than that this season. So, yeah, he’s been pretty bad.

To make matters worse, he didn’t exactly light the world on fire in Triple-A. Although his .274/.368/.350 looks solid enough on the surface, it is mostly terrible with context. Crag is a 30-year-old former All-Star who’s received MVP votes in two different seasons. For a guy with a career .160 ISO with two seasons of .200+ ISO’s under his belt, that lack of power against Triple-A pitchers is disconcerting. His plate approach becomes far less impressive when you recognize the competition he’s been facing.

This may be Craig’s last chance to show anything with the Red Sox, and it’s not even clear how much of a chance he’ll get. The outfield is full at the moment. First base is also full, with Hanley Ramirez transitioning there soon and Travis Shaw earning consistent playing time. With that being said, Boston will make sure that Craig gets his time, because they need to know if he made any strides in the minors. While he’s not an exciting September call-up in the traditional sense, he may be playing for his career, and that’s certainly worth watching. 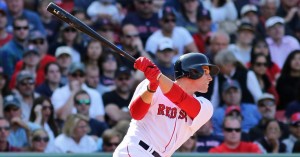 If there were such thing as a minor-league version of Craig, Cecchini may be that guy. He soared through the minors earning accolades from all over for his tremendous hit tool. While his defense was never his strong suit, it was passable. He looked like a guy who would hit for high averages while drawing plenty of walks, a profile that had many drooling despite a relative lack of power. Over the last couple of years, though, his stock has dropped precipitously and now it’s not clear that he’ll even have a major-league career. He’s had a miserable season in Pawtucket, and it’s no sure thing that he’ll even get the call this month. He’s 24 years old and the time is ticking for him to make good on his promise. The Red Sox have a busy offseason ahead, and Cecchini could serve as a throw-in in some major trade. Boston may be smart to give teams a chance to see him more consistently against major-league pitching.

Although he was drafted just three years ago, the former first-round pick is already 25 and on the verge of being a major-league player. Even if he’s just a utility player, he’s good enough defensively to carve out a role at the highest level. The bat is far behind the glove, but like Cecchini, Marrero could serve as a minor piece in a major deal this winter. When teams don’t have the top prospects to call up this month, this next best thing is to have pieces to showcase for trades. Marrero will give them a chance to give Bogaerts some rest down the stretch. Even if he doesn’t showcase himself well enough for a trade, it will be exciting enough to watch him play shortstop. 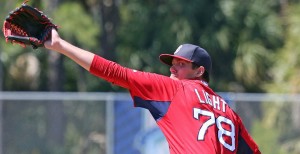 Everyone who writes or talks about the Red Sox has one opinion in common: Boston’s bullpen flat-out stinks. As such, any semblance of help from the farm in this area would be nice to see in September. For the most part we’ll be seeing familiar faces coming up from Pawtucket from the Jonathan Aro, Noe Ramirez, Heath Hembree and Edwin Escobar group. However, there are some other names who have a chance at seeing some time this year, and Light is the headliner of this group. A former starting pitcher, he’s taken a huge leap this year since transitioning to the bullpen. He’s now striking out more than a batter per inning between Double-A and Triple-A, pumping his velocity up to the high-90’s. Dave Dombrowski has a lot of work to do with this relief corps, so it would behoove him to see if any of his young arms can contribute in a meaningful way next year. In that case, Light is the number one name he has to get some eyes on.

For the last names, we turn once again to the bullpen. I group Diaz and Marban together because neither is likely to play the type of major role that Light has the potential to play, but either one could carve out a smaller role for himself in 2016. Diaz likely has the best chance of the two. At 26, he’s been in the organization for two years now, and has moved up relatively quickly. As a fastball-first pitcher, he’s been able to rack up the strikeouts in the minors, but his command and control have been issues. He’s been better in shorter outings, however, and he’s been outstanding in Pawtucket this season. Next year, he could solidify the role that was occupied by a revolving door of Hembree, Aro and Ramirez this season.

Marban is a much newer name than Diaz, as he was plucked from Independent League ball prior to this season. He’s had a meteoric rise through the system, starting the year in Salem before ending up in Pawtucket by season’s end. Although his strikeout numbers won’t blow you away, they’re high enough to get by, and his control has helped him put up great numbers. His ceiling isn’t on Light’s or Diaz’s level, but he’s done enough to earn a chance in a bullpen that is full of subpar arms.

For a bad team, the Red Sox are severely lacking in intriguing September call-ups, but that doesn’t mean they don’t exist. Craig may be playing for his career. Cecchini and Marrero could showcase themselves as lower-end pieces in trades coming this offseason. Light, Diaz and Marban could earn themselves a role in the uncertain 2016 bullpen. The most interesting players to watch this month have already been on the roster, but the newcomers will be worth your time as well.