Milton’s own Rich Hill returned to the Red Sox roster last week, pitching for the first time in a Boston uniform as a starting pitcher. All he did was hold the Rays to one hit and one walk over seven sparkling innings that featured ten strikeouts. After that start, BP had his FIP at 1.56 — and his DRA at a hilarious -1.32. Naturally, he followed that bolt of lighting with another strong start against one of the best offenses in modern memory in Toronto: another seven innings, another ten strikeouts and no walks at all. Hill got tagged for three earned runs with seven hits and one long ball, but at this point, he’s still allowed just nine baserunners in fourteen innings — with your average 20-to-1 strikeout to walk ratio.

Hill’s September dominance would look a whole lot different if he were, say, 25 years old instead of 35. With a baseball lifetime’s worth of baseball executives betting that Hill had some untapped potential, there’s some temptation to hope that maybe Hill’s electric September starts is more “lightning in a bottle” and less “fork in an outlet.” Career numbers like a 4.63 ERA, 4.33 FIP and 4.47 DRA point toward enjoying the show while it lasts.

And yet, high-spin curveballs like Hill’s are in vogue now, with teams enjoying access to Statcast data that provides more information about pitch spin. As Jeff Long explained when looking at “useful spin” and a Statcast data set earlier this season, the spin numbers we get from PITCHf/x aren’t so much measured as they are calculated, using information from the ball five feet in front of the mound and at the plate. Statcast would help the Red Sox determine how much spin Hill is putting on all those curveballs, and how much of that spin was moving in such a way as to generate break.

We don’t have that Statcast information yet — and neither did the Red Sox when they promoted Hill to the rotation last week, as he hadn’t yet pitched in the majors this season. Whether Hill was a promotion of convenience or a deliberate experiment to get that information, we can only guess. “Useful spin” is still about break. And while looking at break doesn’t tell us if Hill is putting an especially high percentage of his curves’ spin to work, it does tell us how much it’s working. From the BP PITCHf/x leaderboards for curveballs this season, as of yesterday morning:

Only one guy on both of those lists, which include every pitcher to throw a curveball this season (several on these lists have fewer than 20 curves thrown, like Murata, Mills, Thomas, Lee, and Beachy). For what it’s worth, of the 16 pitchers to have thrown at least 500 curveballs this season, tops in average horizontal movement was Collin McHugh’s 7.68 inches, and tops for vertical movement — probably the direction that matters most, and for which context matters least — Clayton Kershaw’s -9.48 inches is far and away the best. You get the idea, though: Hill’s movement, at least in his Rays start, was near the top of the charts. And while his career doesn’t show the same extremes year in and out, break numbers from PITCHf/x still show Hill’s curve to be superlative since measurements began in 2007.

It looks like the Astros were the ones ahead of this high-spin curveball thing, plucking McHugh off waivers and seeing him power through 336.2 innings of 3.44 ERA ball to date. Word getting out about the idea still didn’t stop them from picking up Mike Fiers in the Carlos Gomez trade with the Brewers — and Fiers has held a 3.06 ERA with the team in 8 games, one of which was one of those things where a pitcher handles an entire game without giving up a hit. Fiers, by the way, has the most significant vertical movement of any pitcher among those 217 with 500+ curves tracked by PITCHf/x (-11.33).

The Astros were front and center in Long’s article at BP for a reason, and some of the other notes he referenced on McHugh can also be relevant for the Red Sox and Hill. McHugh has hovered in the 90-91 mph range with his four-seam fastball, per PITCHf/x — a bit below average for a RHP. In his first start against the Rays, Hill averaged 90.0 mph on the nose, a more respectable number from a lefty but still average at best.

I haven’t seen numbers specific to lefties, but others have found that slower fastballs tend to be effective low and away from righties to righties (here, and here). Down and away, the majors’ slower fastballs are just about as effective as the game’s higher velocity versions. It’s working for the Astros. If the Red Sox were making a deliberate effort to add someone in the same mold and change him in the same way, maybe we’d expect something similar — even if Hill does throw left-handed.

And yet, that’s exactly not what we’ve seen from Hill. In the Rays start, Hill threw a four-seam fastball to a lefty just once (high and away off the zone). Against righties, Hill threw 56 four-seamers, primarily up and in. It’s the same spot, and it’s the exact opposite part of the zone from what we might expect based on McHugh. And yet, in our small sample, it’s working — extremely well. Hill made 10 Rays look pretty dumb, and got some pretty tremendous whiffs against the Blue Jays yesterday. Many of those were on the curveball that looked all but unhittable at times, but nearly as many were on the four-seamer.

Curveballs probably fit into two camps. It’s the rare curve that is particularly hard to pick up fairly quickly; some get thrown because they’re still hard to hit even if the batter has time to react, and some get thrown as a change-of-pace pitch, banking on the hitter not looking for it. Although I think some pitchers might benefit from throwing curves high in the zone, I’m not sure location on curveballs is all that important; what matters is whether they’re a strike or a ball, and whether they induce a swing or not.

Even if curveballs are not necessarily hard to pick up, they can still help with deception.

Even if curveballs are not necessarily hard to pick up, they can still help with deception. McHugh is living off of the same part of the plate for both fastball and curve and finding success; Hill’s two primary pitches are ending in very different places, but they’re starting similarly. By aiming high in the zone with his fastball, the pitch is coming in on the same plane as the curve. That’s exactly how Ted Lilly did a lot of his damage, with an eminently hittable fastball up in the zone that paired exceptionally well with his curveball.

By throwing high with his fastball, the high “hump” of Lilly’s curveball stayed in the same general plane for a longer period of time; had he thrown fastballs primarily at the bottom of the zone, they would have been distinguishable right away — and his fastball and his curve would both look like they had flashing lights on them. Hill seems to be doing the same thing, throwing high and to his glove side with his fastball just like he always has, and like he did in the first season of PITCHf/x in 2007, when Hill enjoyed a 3.92 ERA over 195 innings with the Cubs (the only season in which he’s topped 100 IP in the majors). See what I mean here, with these 3D trajectories from Baseball Savant — a Steven Souza plate appearance against Hill is on the left, a Logan Forsythe plate appearance against McHugh on the right. On the right, the pitches keep going where they look like they’ll keep going. on the left, even with three fewer pitches, it’s a lot more difficult to tell what’s going on at the beginning of the flight, even for us. 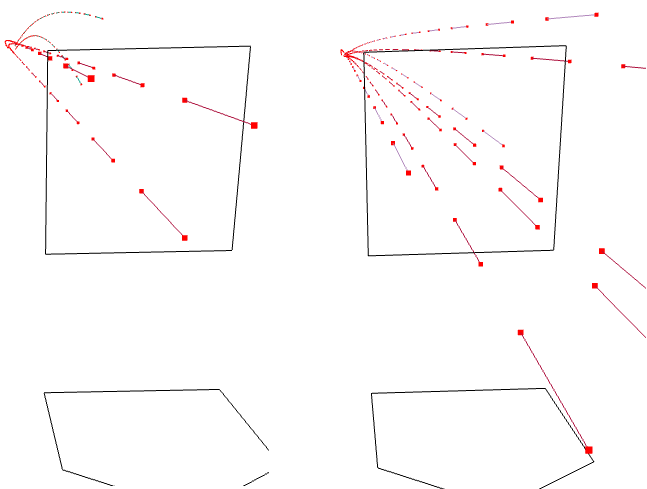 In his brief stint this year, Hill has thrown his curveball more than 40% of the time, as he did in some of his best months in 2007. That sets him apart from other pitchers — even guys like McHugh and Fiers barely top 20% of the time, for the most part — and if the curve is a big part of his fastball’s success, it may really ratchet up the volume that way. In his first stint with the Red Sox in relief, Hill threw the curve almost 75% of the time, which is pretty incredible, but something less likely to work in a starting role.

Hill has tweaked the rest of his repertoire over time; the sinker he tried mixing back in in 2013 and 2014 may have taken a big wet bite out of his four-seam’s effectiveness, and Hill is now reliant on a slider instead of a changeup as his change-of-pace pitch. That still makes sense; he can do with the slider what he does with his four-seam, but while changeups don’t rise as much as a fastball, they still break up instead of down. If Hill has benefited from this Lilly thing (and they were teammates in Chicago), the change wouldn’t fit the model; he’d have to throw it up to stay in the same plane as the curve, and if he did that, he’d end up right over the plate with it.

Maybe all that’s really changed, though, is an appreciation for what Hill brings to the table. There’s no violent change in his mechanics, tools or approach that would make us suddenly think he’s capable of repeating these 10-strikeouts-per-start performances with regularity. But it’s possible he always had this potential to repeat what he did in 2007, and simply didn’t get the opportunity. Yesterday, Hill seemed to keep Toronto guessing, with guys like Edwin Encarnacion and Josh Donaldson splitting the gap between his fastball and curve and hitting nothing but air. With time only for two or maybe three more starts for Hill this season, we might be left guessing at what Hill can do, as well.

Tags: Collin McHugh, Rich Hill, Spin rate, Ted Lilly |
Ryan P. Morrison
Follow @@ryanpmorrison
Ryan P. Morrison is a co-author of Inside the 'Zona, and may have been the first person to suggest moving Hanley Ramirez to first base. You can thank him later.
read more from Ryan P. Morrison

1 comment on “Are Rich Hill and His Hard-Breaking Curveball for Real?”

Toby,I’ve been in some serious debeats about JP with my friend a former Rays pitcher. The thing that made JP so special in 08 and 09 was his curve ball. He threw his curve ball almost the exact same velocity as his fastball plus or minus a few ticks. It was borderline un hitable to righties or lefties. Its too bad he pitched for the USA in the WBC because I believe he led the team in appearances in 08 and he should have been shut down after the long post season run.