On fire this month with a .376/.438/.538 slash line, Mookie Betts now carries an impressive .289 True Average in his first full season — and he doesn’t turn 23 until a few days after the season ends. He’s done it with what appears to be no glaring weakness, with a .291 TAv against right-handers and a .282 TAv against lefties. Whatever his approach is at the plate, it’s working: pitchers have worked in the zone with 53.7% of the pitches Betts has seen; the highest zone rate of any hitter in baseball this season with at least 1,000 pitches.

Mookie Betts’ plate coverage may not be as all-encompassing as last night’s supermoon total eclipse, but it is super, and it has lasted much, much longer. This is exactly what we were told he’d show us: the neuroscience work that became a scouting device as well as a training tool had Betts a “heralded part of the program.”  From that second link, an Alex Speier piece at the Globe in February:

“Betts tested near the top of the charts for the 2011 draft class. The Sox didn’t necessarily know what that meant — there were no data to suggest a correlation between top performance on the simulation and actual in-game abilities — but Betts’s scores raised eyebrows to the point of creating some fascination when the Sox selected him in the fifth round in 2011.

“‘If this guy turns out to be a prospect,’ one front office member reputedly said, ‘we’ll know this [expletive] works.’”

He’s not a prospect now. Well above-average in the majors, he’s one of a small handful of players who are no more than nine days older than Bryce Harper (of course he’s not actually younger…). He’s done it with those same vaunted pitch recognition skills. So what do we say now? Because it [expletive] as [expletive] looks like it’s completely [expletive] working.

Pitch recognition is necessarily about picking up the spin and type of pitch, but it’s also about location, and there’s a whole lot of the former in the latter. Betts ranks 56th of 289 in Outside Swing Rate per the BP stats, a “very good” 25.6%. His Zone Swing Rate is likewise on the high end, but not an extreme; all good, nothing prolific. Both of those things matter, but maybe not equally for every type of hitter. For a hitter who needs things to go right for good things to happen, whether it’s someone below average or a more all-or-nothing guy like Mark Trumbo, maybe swinging more often over the plate doesn’t do as much for you as waiting out the pitchers that are throwing around you; the opposite might be true for a Pablo Sandoval, and some profit by swinging almost never overall, like Martin Prado.

Cut up Betts’ rates this year from a sizable sample of 2,445 pitches into six smallish pieces, and it definitely looks like Betts has a specific answer. Month by month, and switching to FanGraphs’ PITCHf/x derived version of the same plate discipline metrics: 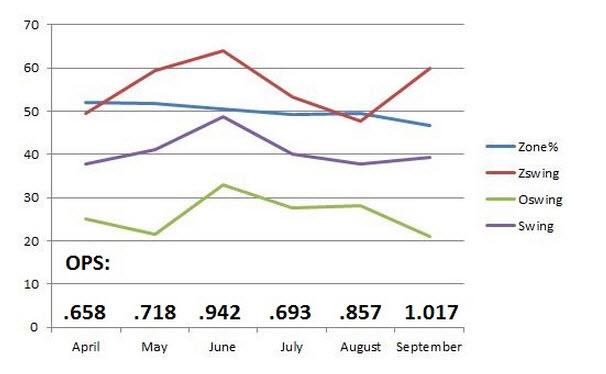 Swinging in the zone helps, it looks like, with Betts’s highest Z-Swing% coming in his two best months at the plate. That’s true for most players. And despite keeping that Zone% up atop the leaderboard this late in the season, it looks from the FanGraphs numbers like that one has been on a steady decline all year. If Betts made an adjustment that called for more swings, it looks like the book may have gotten out on him for that without much lag time.

Still, it may be the case that Betts happens to benefit from swinging in the zone more than the average player, for the same reasons he scored off the charts in the neuro testing. Especially if he goes a little out of his wheelhouse, he swings when he can do something with what he’s swinging at. The guy. Does. Not. Miss.

From Baseball Savant, the breakdown of events on pitches in the top third of the strike zone: 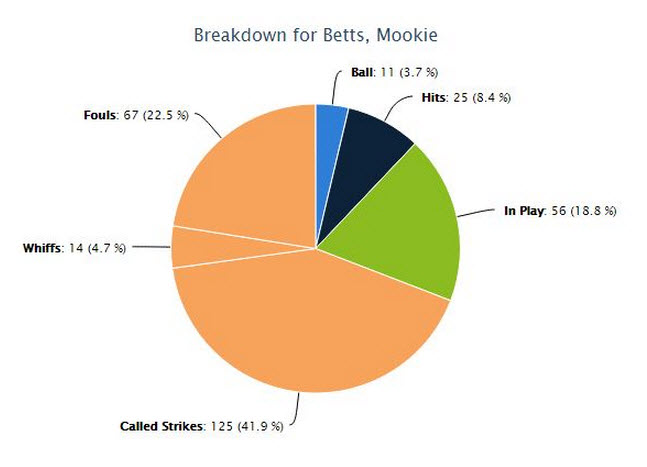 And same thing, but outside the zone, up or up and on either side of the zone (zones 11 and 12 in the PITCHf/x location field): 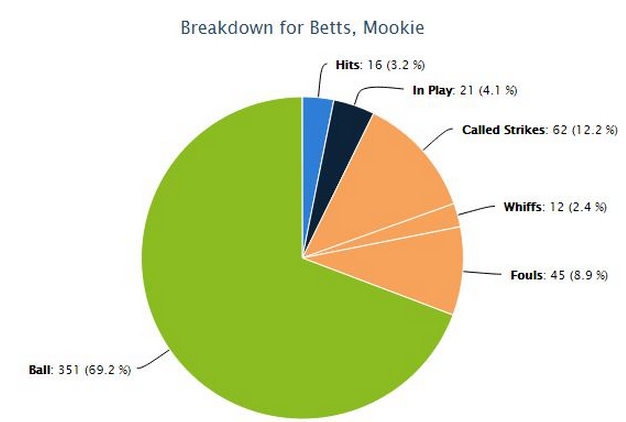 #Precision. Per Brooks Baseball, Betts’ whiff rates on hard, breaking and offspeed pitches are all lower than league average, but that’s especially true for fastballs — on offspeed pitches in particular, he’s been borderline human. And that’s the scary part. Betts isn’t swinging at those nearly as much; he swung 63% of the time on offspeed pitches in April, but he mastered the art of staying around 50% not long into the season — and he’s down to swinging at offspeed stuff just 36% of time in September. He’s still getting better.

Tags: Mookie Betts, Neuro-scouting |
Ryan P. Morrison
Follow @@ryanpmorrison
Ryan P. Morrison is a co-author of Inside the 'Zona, and may have been the first person to suggest moving Hanley Ramirez to first base. You can thank him later.
read more from Ryan P. Morrison

“it definitely looks like Betts has a specific answer”

A year from now, we might be saying Mookie IS the answer…