We all remember the narrative that surrounded the Red Sox before the season got underway. Their offense would be good, but the pitching was questionable. Those who had faith in the team believed that the former would be good enough to negate any negative consequences of the latter. Those who didn’t have faith believed that no offense would be able to support this kind of pitching staff, one that was built around traditional number threes and fours. Looking at what the organization’s strategy was when bringing in new arms, it’s clear what they believed. The front office had built a pitching staff full of ground-ball pitchers, and thought that would keep the team in most games.

Just take a look at the players who were brought in between last winter and the trade deadline during the 2014 season. Rick Porcello, Wade Miley, Justin Masterson, Joe Kelly and even Robbie Ross were all brought in with some starting experience, and all of them leaned heavily on ground balls. Each one of those pitchers consistently produced ground-ball rates greater than 50 percent from season to season before coming to Boston.

Overall, that group came in and helped form a pitching staff that was atrocious by some measures, but perfectly fine by others. If you look just at ERA, they were among the worst groups of pitchers in baseball, ranking 25th. Even FIP pegged them as a bad unit, as the Red Sox ranked 22nd in that category. However, things get a lot better when you look at BP’s cFIP and DRA-. Boston put up marks of 100 and 99 in these statistics, respectively, making them an essentially average pitching staff by both a predictive and a descriptive stat. So, depending on how you choose to look at things, the Red Sox either lost because their pitching was so bad, or their pitching did exactly what the team was expecting, and other areas of the roster just failed to meet expectations. The question I’m curious about, though, is whether or not ground balls played a big role in this success (or lack thereof).

Boston’s pitchers induced ground balls just over 45 percent of the time, which ended the year as the 23rd highest mark in the league. It seems fairly obvious that the Red Sox were trying to finish higher than that.

As a staff, it appears the whole ground ball strategy didn’t really work out according to plan. Boston’s pitchers induced ground balls just over 45 percent of the time, which ended the year as the 23rd highest mark in the league. It seems fairly obvious that the Red Sox were trying to finish higher than that. In fact, this is the third straight year in which Boston has finished 23rd or 24th in GB%. Of course, when talking about this pitching staff, one has to mention that it started looking much different than planned relatively early on. By the end of the year, guys Eduardo Rodriguez and Henry Owens had made a big impact on the team’s pitching numbers. So, is that the reason for the lack of ground balls, or did the new acquisitions just not do their job?

We’ll start with Porcello, who was in some ways the face of Boston’s pitching staff. He was the most high-profile addition, and represented that mid-rotation ground-ball-type that they appeared to be targeting. In his first season with the Red Sox, he changed dramatically as a pitcher. For the first time in his career, Porcello finished with a ground ball rate under 51 percent, and it was just the third time he finished under 54 percent. Among the 141 pitchers with at least 100 innings, Porcello’s 47 percent ground ball rate ranked right in the middle of the pack at 71st. The reason for this dramatic drop off is quite simple; he changed who he is as a pitcher. For one thing, he started to lean on his two-seamer rather than his sinker, something he changed as the year went on which, unsurprisingly, led to better results. On top of that, however, his approach on the mound changed. Instead of pounding the bottom of the zone, he tried to attack up in the zone much more often. 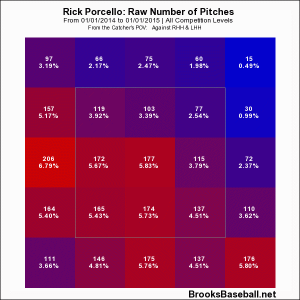 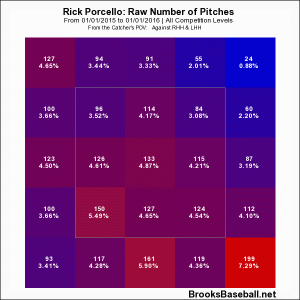 It’s entirely possible that many of these pitches were just missed spots from Porcello, but he had enough control this year to suggest that at least a significant part of the difference between these plots were because of a changed approach. While the approach led to more strikeouts, it also led to fewer ground balls, more hits and more home runs. The tradeoff was not worth it.

Miley was the next most prevalent pitcher brought in this year, and was essentially what everyone thought of him before the year. He’s a boring back-end guy who will get ground balls and limit damage most of the time. His ground-ball rate did fall a bit this year, but it wasn’t as dramatic as it was with Porcello and stayed at 50 percent, just missing the top 40 in ground-ball rate. There wasn’t much change in his approach either, as he continued to pound the bottom of the zone and relied on roughly the same pitch mix he always has. The real difference was likely he fact that he faced a DH every time through the order rather than an opposing pitcher.

Next, we look at Masterson, who many have probably forgotten was even on the team for most of the first half. I don’t think it’s unfair to say the Masterson experiment failed on every level, as he was with the team for its worst stretch, and he struggled virtually every time he took the mound. That extended to his ground ball inducing ability as well. While his 52 percent rate looks good in a vacuum, this is a guy whose GB% typically sits near or above 60 percent, making his 2015 mark the lowest of his career and a significant downtick. Like Porcello, Masterson stopped throwing his sinker so much, and also started to throw up in the zone more. However, unlike Porcello, it’s unclear how much of this was strategy and how much was just a bad pitcher pitching badly. With Masterson, it was never clear that a high pitch was part of the plan. Instead, it looked more like a pitcher with very bad command.

Finally, we have Joe Kelly, one of the most strangely divisive pitchers in recent memory. Before coming to the Red Sox in the John Lackey trade last year, he consistently carried ground-ball rates closer to 60 percent than 50 percent. Then, in 2015, he watched that number plummet to 46 percent, a below-average rate. What’s odd is the fact that, per Brooks Baseball, he started throwing more sinkers and sliders. It’s clear his [editor’s note: great] stuff just didn’t work the way it was intended. Once again, we have a Red Sox pitcher who attacked the upper portion of the zone more often than he had previously in his career. However, with Kelly, the change wasn’t dramatic and poor command could easily be to blame.

So, in the end, Boston’s strategy to induce more ground balls in 2015 was a clear failure. The team stayed in the bottom-third of the league, and it’s individual pitchers all watched their ground ball rates fall this season. Of the new acquisitions, only Miley stayed at a 50 percent ground ball rate. Some of this was a change in approach, like with Porcello, that appears to be a misstep by both the pitcher and the coaching staff. Some of it was just a bad pitcher struggling with location. The moral story appears to be building a pitching staff around contact-oriented pitching can easily lead to bad results.

I would love to look at Porcello’s ground-ball rate from start to start. In the first half, his GB rate was just over 40%, as I recall. After his DL stint, he consciously tried to return to his old ways, and appeared to do so successfully.

As an aside, if the Sox were so committed to GB pitchers, signing Sandoval to play 3B was even less wise.