Ryan Cook didn’t make the best impression in a Red Sox uniform this year. Maybe a mere five games and 4.1 innings shouldn’t do a whole lot to make us certain about a player, but as Addison Reed might tell you, there’s struggling, and then there’s bleeding all over everyone and staining their favorite shirts. Cook’s 13 earned runs surrendered during his 4.1-inning span gave him a career ERA with Boston of 27.00. Ichiro Suzuki’s career ERA with Miami is 9.00.

It’s no guarantee, though, that Super-GM Dave Dombrowski and GM Mike Hazen will opt to not offer Cook a contract for 2016 by the non-tender deadline a month from now. As evaluation goes, ERA doesn’t always offer all of the answers, small samples are almost necessarily misleading, and an ERA from a small sample only has value as, say, a hook for a piece about Ryan Cook. Relievers are weird. But it wasn’t so long ago that Cook was one of the AL’s most dominant relievers for two years running, and at $1.4M for a projected arbitration salary (plus the value of club control for 2017), Cook is not a pricey gamble if a return to dominance seems possible.

It’s been a fairly steady decline for Cook, however, with few of his peripheral stats improving in any meaningful way from year to year. Still, if 2015 had never happened and Cook were coming off of his 2014 season, it would be hard to not tender him a contract — even if the $1.4M projection would be too low in that universe.

Players don’t typically get non-tendered due to one team’s particular roster construction: it’s more about a player’s perceived value and his expected cost. If the Red Sox front office believes Cook would command about $1.5M in free agency, then he’s worth something now. If the team believed in Cook more than the average team, the surplus value might be even higher in their book. But going year-to-year with a player (especially a reliever) brings even more value to the table, with the team effectively getting a series of one-year club options. If you think Cook is worth $1.5M instead of $1.4M because of the chance he could return as a dominant reliever, you’re also looking at the opportunity for bringing him back in 2017 for what could look a year from now like a significant bargain.

The main problem: it’s not just command and Cook’s peripheral stats that have looked like they were eroding. Cook’s main secondary pitch has always been a slider, but he’s thrown more changeups than the average reliever, and after being moved from the Diamondbacks to the Athletics in the Trevor Cahill trade, he started throwing sinkers like it was his job. The main takeaway from this velocity graph is that Cook has seen his velocity sapped, somewhat. In 2012 and in 2013, Cook averaged exactly 96.22 mph release speed with his fourseam fastball, according to Brooks Baseball. In 2014 that had slipped to 95.53 mph, and in his more limited time in 2015, he averaged 94.82 mph on the pitch. That 1.4 mph drop may not seem like a big deal, but it turns out that every precious mile per hour tends to impact relievers (.54 points of ERA) a lot more than starters (.28 points of ERA).

And that may not be Cook’s biggest problem. As time has worn on, Cook has seen his slider movement reduced. There’s still a pretty big difference between his slider and his other pitches, but look how close his slider movement has gotten to the zero/zero point in the middle of this scatter plot, which is where we’d find a theoretical “spinless” pitch. 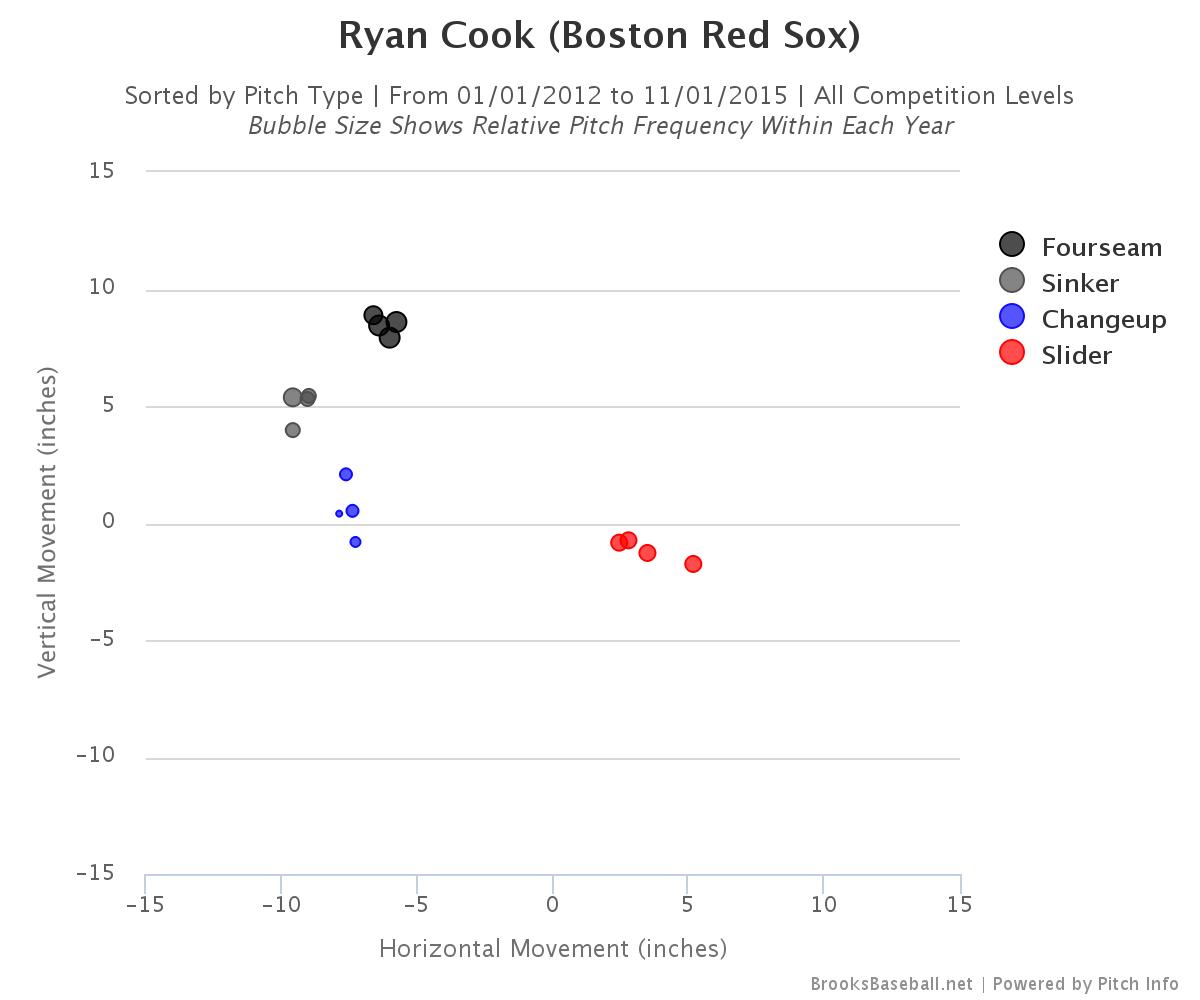 Still, this is the project that the Red Sox acquired at the outset of August. Out of the race, Cook was a value play; the Athletics and Red Sox seemed to agree that Cook still had a little bit of surplus value left, and the Red Sox bought that with cash. That doesn’t seem like it was about 2015; it was about 2016. And so we’re back to that original question: what can 4.1 innings really tell us? Because that’s the only thing that’s changed. A few months ago, it looked to the Red Sox like Cook might be a worthy experiment for 2016, even as his club would be taking him to arbitration for the second time. For that reason alone, Cook is a non-tender candidate and not a non-tender non-brainer.

Moreover: there are still some things that the Red Sox and Cook can try. Check out the slugging percentages against Cook’s four pitches in the last four years (remembering the 2015 sample is just 8.2 innings):

Maybe increased usage of the sinker has helped make the fourseam more effective, but he’s used them similar percentages of the time during that whole span; backing off the sinker might be worth trying (.225 slugging against on Cook’s fourseam during a shaky 2014 is extremely low for a fastball). It’s also unclear that somewhat increased usage of the changeup has worked out, and that’s all in the context of Cook’s slider going from one of the best pitches in the majors to being merely good. There’s also Cook’s struggles against lefties, which have only gotten more severe as he’s relied on the changeup against them more and more.

It looks like Cook has some physical issues to overcome, too: a strained elbow in 2014 is one possible culprit and the ravages reserved for relievers from aging curves the other suspect. Only the Red Sox know how Cook is doing physically, and whether he’ll be able to salvage his young career. Still, it does look like there are some adjustments Cook can try that have little to do with those physical limitations. Whether the Red Sox tender Cook a contract will depend partly on what they know that we don’t — and yet it may be a close call.

Tags: Ryan Cook |
Ryan P. Morrison
Follow @@ryanpmorrison
Ryan P. Morrison is a co-author of Inside the 'Zona, and may have been the first person to suggest moving Hanley Ramirez to first base. You can thank him later.
read more from Ryan P. Morrison

Sure, maybe he’ll regain his earlier arm strength and fastball velocity, and maybe his sinker will move again, but isn’t this the kind of wishful thinking that made the 2015 bullpen what it was?

Good point, but isn’t that a hallmark of almost any bullpen every year? But agree that the Sox took more risk than usual with Ogando, Mujica, Varvaro, Ross and later with Cook and Machi. They would certainly have been smarter holding onto lefty Miller than an already fatigued Breslow, but who knew.

It is too bad that, as with the rookie position players (XB, Mookie, JBJ, Castillo, Shaw, Brentz) who were not quite abe to step up in 2014, that young relievers appeared not quite ready in 2015, but could be very effective at some point in 2016 (Barnes, Workman, N. Ramirez, Hembree, Escobar, Light, Diaz, Aro).

Meanwhile, Koji, Tazawa, Ross, Wrigbt and lefty killer Layne is a very strong core to build around, as DD certainly will. But even stars like Chapman, Kimbrel, Paps, O’Day, given the inconsistency of BP arms, despite past success (see Cook, Ogando, Machi) and big $$, could fail in 2015, which makes those talented Sox prospects even more valuable