Welcome to BP Boston’s Roster Recap series! Over the next four months, we’ll be breaking down every player on Boston’s 40-man roster and many of their top prospects in order to provide a comprehensive overview of the Red Sox roster’s strengths and weaknesses, as well as what we can expect moving forward. There’s no better time than the offseason to review the best (there was some best!) and worst (there was a lot of worst!) of the past year in red and navy. You can see previous editions of Roster Recap here.

This escalated quickly. While we may have expected the Sox to add an ace this offseason, did you really think that they’d add David Freaking Price on the first day of December? Me neither. We’re quickly approaching Full Dombrowski, and as a result the Sox get the best starting pitcher in the American League over the past five years.

Most everything went right, didn’t it? He hit his career low in ERA (2.45), matched his career low in FIP (2.78) from 2014, and made a compelling case that he was the American League’s best pitcher. Though he eventually came in second in Cy Young voting, he had a phenomenal season, and only got better after moving at the trade deadline to a much harder ballpark to pitch in (the Rogers Centre).

In essence, Price had his best season of his career. Why? Well, it’s easy to point towards his changeup, an absolutely devastating offering that now gets about 20% whiffs. Not only that, it’s a great equalizer against right-handed hitters: traditionally Price has had over half a run difference in his FIP against righties (who make up more than two-thirds of the batters he faces). In 2015 he evened out his platoon split, actually performing slightly better by OBP against, SLG against, and by FIP against righties.

In 2015 Price evened out his platoon split, actually performing slightly better by OBP against, SLG against, and by FIP against righties.

Oh, and if the tangible stuff isn’t enough, he’s cultivated a very nice reputation as a mentor to other young starting pitchers, with both Chris Archer and Marcus Stroman saying nice things about the older guy on Twitter after his deal was signed. Not only will this be a boon for the team’s trio of talented young lefty starters (Eduardo Rodriguez, Henry Owens and Brian Johnson), perhaps Price can use this enthusiasm to his advantage, and psychologically destroy the aces on the Sox’ divisional rivals.

Um, the playoffs? Price was relegated to a mop-up man, pulled from the rotation — basically the Jays did everything in their power to limit one of the best pitchers in baseball during his playoff run. The deeper the Jays got, the less they wanted to lean on the big lefty.

As you may have heard, the underlying numbers didn’t change all that much during Price’s postseason: he gave up many more home runs than usual, but the real problem was that he couldn’t strand a runner to save his life. His LOB% of 51.4% deserved the AL Playoffs Worst Statistic Award (if such a thing existed).

Should we expect Price to be terrible if the Red Sox somehow find their way into the playoffs next season? Nah. I mean, his history of October/November ineffectiveness is a data point, but it’s a small one. Still, you can’t argue that his postseason work was less than terrific.

It better be good! Seriously, with that much money committed to him, the expectations are sky-high. Fortunately, few pitchers are better prepared to deal with those expectations than Price. While most pitchers get injured, Price has proven to be very, very durable over his career, so there’s no immediate concern that he’ll go all Clay Buchholz on this team. And performance-wise, well, he’s in the prime of his career still.

If I can be real for a minute: the Red Sox are definitely buying some of the worst years of Price’s career with this contract … provided he doesn’t opt out after 2018. But 2016? This should be golden. They’re getting an elite left-handed pitcher at the height of his powers, a pitcher who has proven to make adjustments, stocked with a complete arsenal of pitches, and whose yearly velocity readings are basically a straight line. 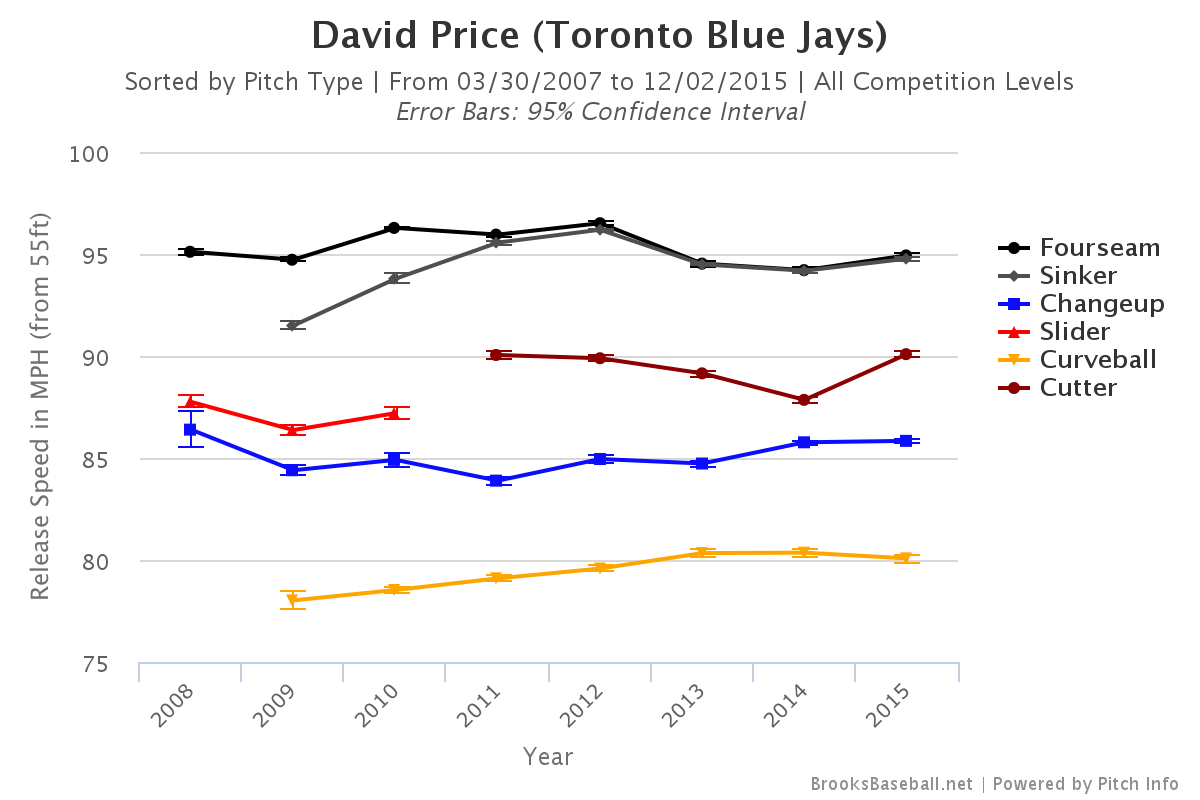 It stands to reason that 2016 may not be a Cy Young campaign, but it will likely be a very good season from one of baseball’s very good pitchers. Get pumped, Sox fans. This is the best pitcher this team has seen since Curt Schilling, and these next few years are likely to be some of his best.