In retrospect, Dave Dombrowski hated last season’s bullpen. We know that now because he spent the off-season and quite a bit of capital to bring in two top relief pitchers. Craig Kimbrel is the big name but Carson Smith was, if numbers are to be believed, his equal, at least he was last season. Smith struck out an incredible 32.4 percent of the hitters he faced in 2015, good for 11th best among all pitchers in baseball with a minimum of 50 innings pitched (Kimbrel was fifth on the same list). The combination figured to be figurative death for opposing lineups in 2016 but now Smith has gone down with a forearm injury and will miss an unspecified amount of time. The Red Sox seem optimistic, but when you add reliever to forearm injury it’s best to keep one’s expectations in check. The Red Sox will need a replacement for Smith.

The good news is that the Red Sox have Koji Uehara, who struck out an almost identical 32.1 percent of the batters he faced. The bad news is that happened in 2014. Uehara was good last season as well, though not otherworldly and then he missed the last two months with a fractured wrist. The other part of the Red Sox quadrumvirate of great relievers is Junichi Tazawa who, if we’re being honest—and I feel like you and I have grown close enough over the last paragraph plus for true honesty—probably doesn’t quite belong with that group. Tazawa typically starts strong as his 2.61 career first half ERA shows, but he falls off during the second half as his 4.24 career second half ERA shows. Last season it was even more pronounced as his 2.58 first half ERA was dwarfed by a 7.08 second half ERA.

The Red Sox don’t figure to dominate with their lineup or starting rotation, so losing Smith for what could be a very long time definitely stings. So what are the Red Sox to do? Enter Matt Barnes. Barnes, you’ll recall, was the team’s first round pick back in the 2011 amateur draft and now, after years of starts and stops, the team has decreed he is ticketed for the bullpen full time. I won’t debate the wisdom behind the choice here, except to say that Barnes, who has been a bit disappointing to date, may be just what the Red Sox need to step in for the injured Smith in the short term, and in the longer term, to potentially add a fifth dominant arm to the pen whenever it is that Smith returns.

Why might someone say that, besides it’s a beautiful day outside and the chirping birds command optimism? Barnes has a few things going for him that might lead you to believe he could excel out of the bullpen. His velocity is the big one. His fastball has averaged above 95 mph during his time in the majors and that is including his time as a starter. His strikeout rate in the minors was routinely above average even if that didn’t show once he reached the majors. Oh, and his age, as Barnes is still just 25 years old. That’s the end of the list.

Oh, I forgot, there’s one more thing. Barnes began his career as a starter and has started intermittently since first reaching the majors in 2014. He has since admitted that the transition wasn’t seamless for him. Alex Speier of the Boston Globe asked him about this recently and Barnes was honest.

“Going to the bullpen, I was like, ‘Awesome, one or two innings, I can just kind of let it loose.’ That doesn’t work that well if you’re not going to locate your stuff. I almost got excited, thinking I could throw incredibly hard now. But incredibly hard down the middle in the big leagues gets hit. It will either flatten out or run to the middle. It doesn’t have the same carry through the zone, dropping the arm and using the body to make it throw harder, as opposed to staying on top of the ball, working downhill, and angling it.”

This is a perceptive answer to a perceptive question by a perceptive reporter. The numbers bear this out as well. Here is Barnes’ velocity chart from Brooks Baseball by game. 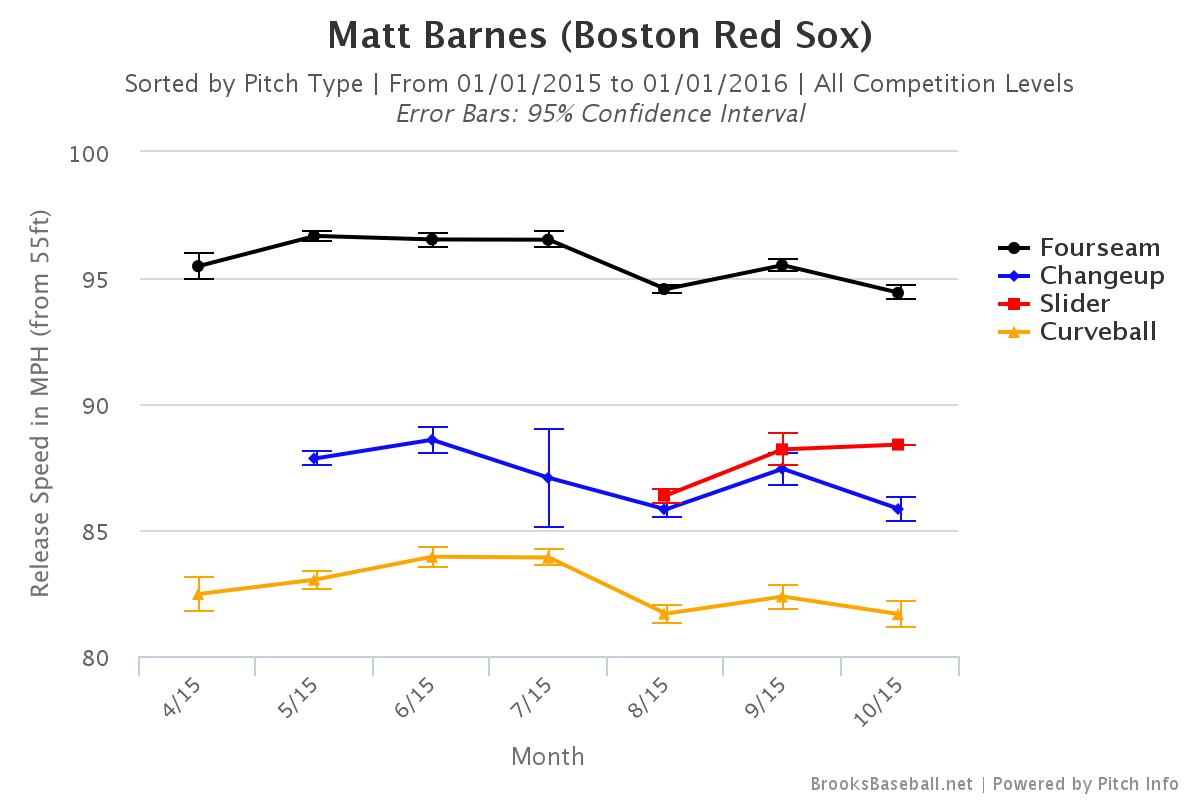 You can see the downward trajectory of Barnes’ fastball velocity. Normally this would be a red flag, but in this case it seems to be by design. It should be noted that this didn’t lead directly to a big jump in strikeout rate, as Barnes struck out 19.5 percent of hitters after dropping the velocity compared to 18.4 percent in August before doing so, both of which came in 10 1/3 innings pitched. It’s difficult to draw conclusions from either set of 10 1/3 innings, though, as differences in weather, defense, and opponent quality can skew the data.

One can see the wheels turning, however, as Barnes goes from a rookie starter to a seasoned reliever. Take his pitch mix. Barnes had been a fastball, curveball, changeup pitcher but the end of last season saw a change in his pitch usage pattern. His use of the curve and change were curtailed and a slider was added to some effect. The slider got some swings and misses and may have helped the curve play up in a more limited role, though it’s too limited a scale to draw any solid conclusions. This is all a process for Barnes. Not trying to throw the ball through an iron gate in order to get more movement on a pitch is something a pitcher will do, and Barnes has clearly taken a step forward on the mental side of things if he’s considering that sort of thing.

Barnes has been, it’s fair to say, dominant this spring. To date he’s logged 8 1/3 innings during which he’s given up just one walk while striking out nine.

That brings us to right now. Barnes has been, it’s fair to say, dominant this spring. To date he’s logged 8 1/3 innings during which he’s given up just one walk while striking out nine. It’s difficult to know what this means. It could be Barnes has continued the adjustments he made at the end of last season and they’re starting to pay more dividends on the field. That’s not a big stretch to make. However, this is spring training. This past Monday Barnes threw 1 1/3 innings against the Cardinals. In the sixth inning he struck out Brandon Moss, and then got Randal Grichuk and Matt Adams on a ground out and a fly out. Pretty good, right? A week ago yesterday Barnes faced the Orioles. In the fourth inning he gave up a double to Joey Rickard and then a smoked liner to Nolan Reimold. Should have been a run, but Rickard was thrown out trying to steal third so Reimold’s liner was the third out instead of a sacrifice fly. That’s spring training. Also that’s baseball. It’s why you hear “small sample size” so much you want to have your ears removed.

Spring training is a tough time to figure out actual performance. Baseball Reference has a stat called OppQual which can fairly be translated to Opponent Quality. A 10 indicates the average opponent quality is that of a major leaguer. Barnes has an OppQual of 8.2, meaning on average this spring he’s faced Triple-A quality competition.

Even so, Barnes has looked good with his new velocity and repertoire so far. Considering how much this team figures to depend on its bullpen, the Red Sox could use a pleasant surprise. Perhaps Matt Barnes is it. Or, perhaps this is one of those articles that becomes laughable a month after publication. As the popular saying goes, it’s spring training for everyone.