As it stands right now, the 2016 Red Sox season looks like it could be remembered as a transition between eras. David Ortiz is retiring, Dustin Pedroia is getting older and Clay Buchholz … well who knows with him. On the other end, Mookie Betts and Xander Bogaerts look like they’re ready to officially take over as the core of the future.

A slight step below those two is Blake Swihart, who could very well be the third member of that core. He had a strange season last year, getting off to a slow start that was likely due to him being thrust into a starting opportunity he wasn’t quite ready for. The young catcher made some key adjustments later in the year, however, turning in a second half that saw him hit .303/.353/.452. Overall, he ended the year with a .274/.319/.392 line, putting him just below average among major-league hitters in terms of offensive performance.

Looking a little deeper into Swihart’s numbers at the plate, a few things stand out. He struck out a little more than one would like, finishing with a strikeout rate of roughly 25 percent. Swihart also didn’t walk much, ending the year with a rate just under six percent. He displayed some semblance of power, but his .118 ISO was nothing to write home about. Put all of that together with his final line, and it’s clear that he was aided by what could be construed as an inflated .359 BABIP.

Plenty about Swihart’s profile suggests he can carry an above-average BABIP throughout his career, or at least in the early part of it.

As we try to project his performance in the coming year, the easy analysis is to say that his BABIP will regress, and Swihart’s overall offensive production will fall. To be fair, that’s probably correct to an extent. Over the last three years, only four qualified batters have posted a higher BABIP. It’s not fair to put him on that level. Nonetheless, plenty about Swihart’s profile suggests he can carry an above-average BABIP throughout his career, or at least in the early part of it.

We’ll start with his batted-ball profile, since intuitively that should have the highest correlation with a hitter’s success on balls in play. Unsurprisingly, given the thesis of this article, Swihart hit plenty of line drives in 2015. According to BP’s batted-ball metrics, 24.7 percent of the soon-to-be 24 year old’s batted balls were line drives. Among the 311 players who accrued at least 250 plate appearances, that ranked 93rd, putting him safely above average. He was also better than average in terms of ground-ball rate, ranking 125th among that same group. While grounders aren’t ideal, they do result in more hits than fly balls, and Swihart’s rate wasn’t alarmingly high.

Speaking of fly balls, he kept those to a relative minimum, finishing 191st on that leaderboard among MLB hitters. Finally, he rarely hit infield pop ups, which are essentially strikeouts that reach the field of play. His 5.2 percent POP% ranked 220th.

It’s not just how he hits the ball that’s so beneficial, though. Swihart also does a great job of hitting the ball well to all fields. In an era where teams are employing more sophisticated defensive scouting reports, preventing any kind of shift is a key to maintaining a high BABIP. As you can see in the following table, he succeeded in keeping defenses honest:

For reference, each of those line-drive rates were well above the league average for the given split. The only complaint one could have about Swihart’s all-fields approach would be that he hit the ball a bit softer to the opposite field, finishing with a 51 percent fly-ball rate and an atrocious 20 percent POP%. To be fair, that kind of distribution is a somewhat common occurrence among major-league hitters. For more a visual breakdown of how this approach looked, enjoy this spray chart: 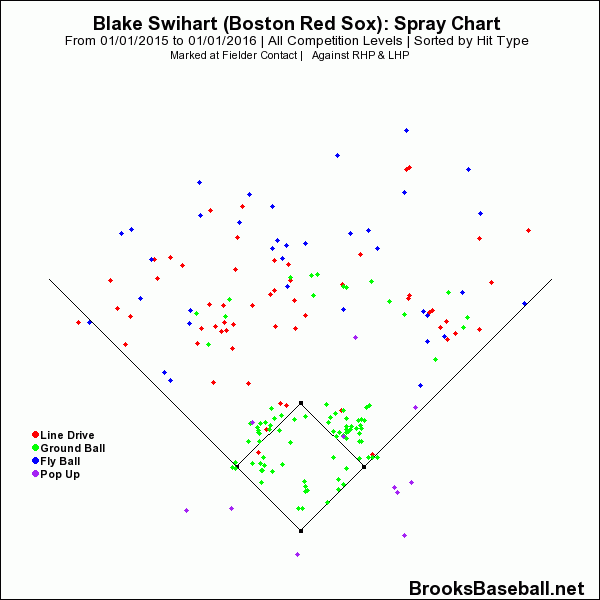 So, Swihart had a good overall batted-ball profile, and he was able to use it all over the field. But he also excelled at squaring up any kind of pitch that was sent his way. Like just about every other hitter in the league, he was dealt a lot of fastballs. Unsurprisingly, he handled those well, compiling a 19 percent line-drive rate against four seamers and a 36 percent rate against sinkers.

Offspeed pitches and breaking balls did admittedly give him some trouble, at least in terms of contact rate. This was a big reason why his strikeout rate was so inflated. With that being said, when Swihart did make contact on these pitches, it was usually the kind that ends up putting him on base. He finished the year with a line-drive rate of at least 25 percent on every non-fastball pitch and a higher ground-ball rate than fly-ball rate on every pitch besides the slider. I won’t bother going through the entire breakdown, but Brooks Baseball has all the info you need.

Of course, all this data, as encouraging as it may be, came in a relatively small sample. It’s hard to say that since he’s done it in one season, Swihart should be able to repeat high BABIPs for years to come. Luckily, he didn’t just appear out of thin air in 2015. We have scouting reports to base some of our opinions on from when he was coming up through the minors as a top prospect. Specifically, we have this blurb from prior to the 2015 season, when Swihart was the best prospect in the system.

fluid stroke from both sides of the plate; loose hands; excellent bat control; works to keep weight back when unfolding; drives ball well into both gaps,

On a team with so many question marks, continued progression from Swihart is going to be a key factor to watch for as the season marches on. Ideally, we’d like to see some improvement in the three true outcomes rather than Swihart leaning on an above-average BABIP.

Still, that BABIP has a good chance to stay higher than expected based on his swing. He hits a ton of line drives, does so to all fields and against all pitches, and has built his game around this kind of profile throughout his professional career. Given how poorly catchers have hit across the league recently, Swihart has a good chance to give the Red Sox strong production from the position for years to come. He may never be Betts or Bogaerts, but there’s good reason to believe Swihart’s offensive profile will carry him through this league for a long time.

As much as I enjoyed this article, I am a firm believer that the phrase “for years to come” should be thrown into a fire pit and never used again. You used it twice, which is a sin I cannot forgive.

Even for the internet this is something.