When your intrepid blogger signed up for a bi-weekly column called “Price Check” way back in March, he thought a deep dive on the Boston’s new star would be a valuable addition to the Red Sox dialogue. This, as it turns out, was wrong. The rest of the internet — the rest of you — do such a good job of it that it’s hard to find anything original to say.

On that note, I’m much more inclined to use the research that others are doing on Price as a jumping off point for my analysis, because their work is so in-depth and of high quality that it would be silly to attempt to do them one better. The best way to think about it is that I’m jumping into an ongoing conversation without really trying to start one on my own.

With that in mind, I’ll start by jumping in on Chris Towers’s buy-low fantasy column on David Price from yesterday, with the caveat that I find fantasy analysis as good or better than quote-unquote “real” analysis, and don’t make a distinction between the two. Baseball is baseball and David Price is David Price whether he’s making outs for the Red Sox or Luke Chatelain in TDGX.

Towers makes a slate of great points, but starts by noting the sheer strangeness of Price’s numbers so far:

First, it’s worth noting just how weird Price’s start to the season has been. On the plus side, he’s averaging more than six innings per start, and leads the majors in strikeouts with 49. On the negative side, he also leads the majors in hits (38) and earned runs (25). That’s not exactly what you would expect, and should be your first sign that this slow start isn’t necessarily representative of, well, anything.

I probably disagree that it’s representative of nothing, but that’s not a criticism, because the information on which I’m going is from later in the same column. Long story short, while Price has been knocked around pretty hard at times, pretty much every other time someone has put the wood on the ball it’s basically amounted to a piffle:

One thing that is interesting is, while Price ranks just 68th among 205 pitchers in average batted ball exit velocity, per BaseballSavant.com, he has the 14th-highest exit velocity on line drives or flyballs. Once again, on those rare occasions when batters have been able to square up to Price’s pitches, they’ve been able to drive them with authority. And, of course, when batters aren’t really squaring him up, they are hitting dribblers — he has the 19th-lowest exit velocity on groundballs.

So why the spike in hard-hit balls? Towers doesn’t say, which is probably the right thing to do in a situation so obviously dominated by the tyranny of small sample sizes — and as many people have noted, it’s somewhat par for the course at this time of year:

Some of this might get back to what I wrote about last time, when Price said that he had trouble ramping up the velocity in the cold weather, but while Price’s velocity is down across the board, his strikeouts are way up. In regards to his velocity being down, it’s not because he can’t reach the high marks when he needs to — he hit 96 against the Braves, per Brooks, en route to this…

David Price has tied a career-high with 14 strikeouts against the Braves, with 7 of them swinging. pic.twitter.com/Fq9yZFpqct

… but that the baseline seems to have been pushed downward. For all the talk about his slow Aprils, Price is solidly below even his historical early-season velocities thus far: 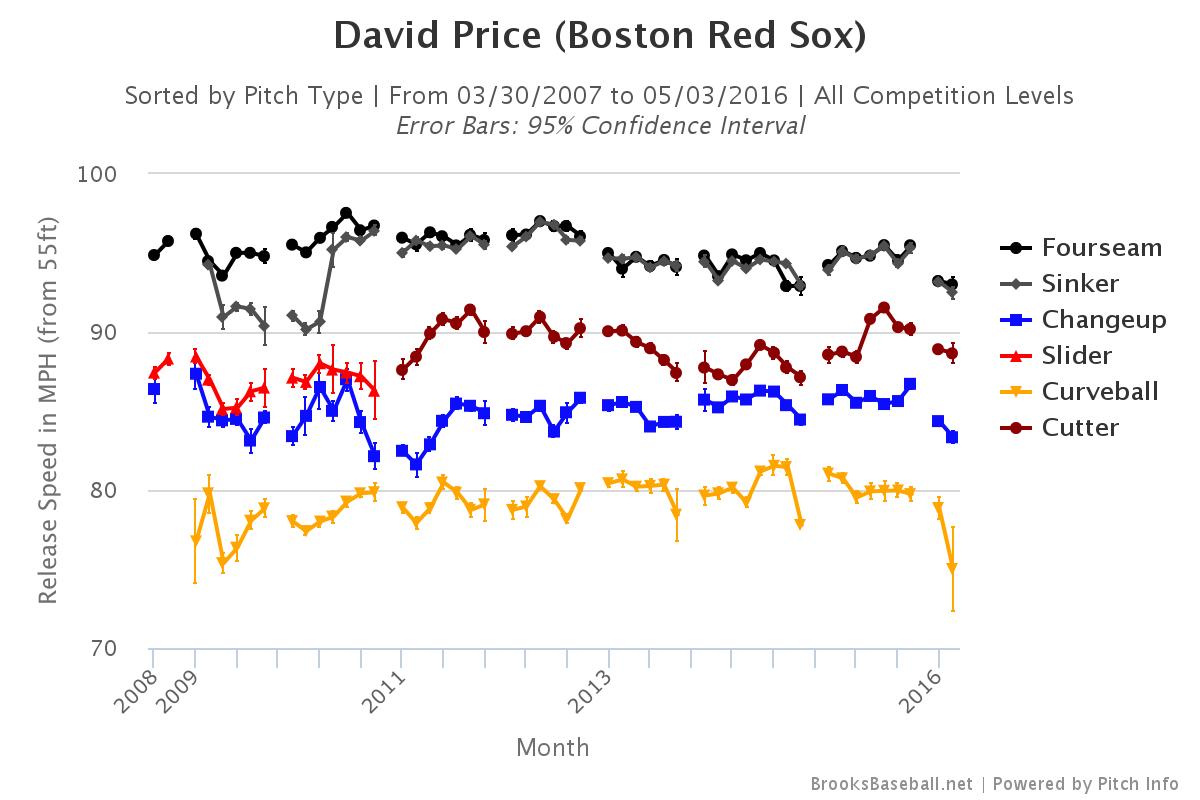 Let’s just say that I’d be surprised if Price was able to sustain average velocities comparable to those for which he has renowned, but I consider it beside the point. At no point were the Sox signing a 27-year-old Price. If the small sample of Price’s performance thus far is potentially indicative of anything, it’s that of a pitcher coming to grips (literally, ha) with a declining skill set, and figuring out how to use it to his advantage. That is, of course, if you buy the dip in velocity. The ProJo’s Tim Britton says that it might be premature:

If we look at Price’s recent history, he has had similar difficulty reaching his peak velocity in the first month of the season. In both 2014 and 2015, Price’s average fastball velocity was lower than it was in the summer months.

This jives with manager John Farrell’s belief that it takes power pitchers the first month of the regular season to reach their maximum arm strength. Price has exhibited no concern about his velocity, and he was throwing 95 in the eighth inning in his last start against the Braves. With first-pitch temperature at 46 degrees at Fenway on Sunday night, it’s not surprising he couldn’t dial it up quite as much.

There will indeed come a time when Price’s velocity diminishes, and it wouldn’t be a shock if it happened this season. But he’s prepared for that adjustment by pre-emptively adding to his repertoire over the past few seasons, and there’s no reason he can’t be an ace throwing 93 rather than 95.

I think he’s going to be the ace throwing 93 as soon as this year, but Britton is right-on when he says he can make it work. In some lights, he has made it work already, but it’s just not showing up on the score sheet. Britton cribbed from his own column to post this eye-popper on Twitter:

(Price’s FIP is 8th in AL, ahead of Sale. His K/9 is first. His LOB% is ridiculously low and will normalize. Conclusion: He’ll be fine.)

That’s pretty reassuring, as is the fact that the Sox are in first place despite Price’s struggles, but it isn’t all roses, of course. Why is Price struggling? As Britton notes, he’s getting plastered when he leaves fastballs up in the zone, as he did to A-Rod on Sunday night. Historically he’s gotten pummeled on his curveball from time to time, only to reign it back in, but the fastball hasn’t been a problem, even early in the season: 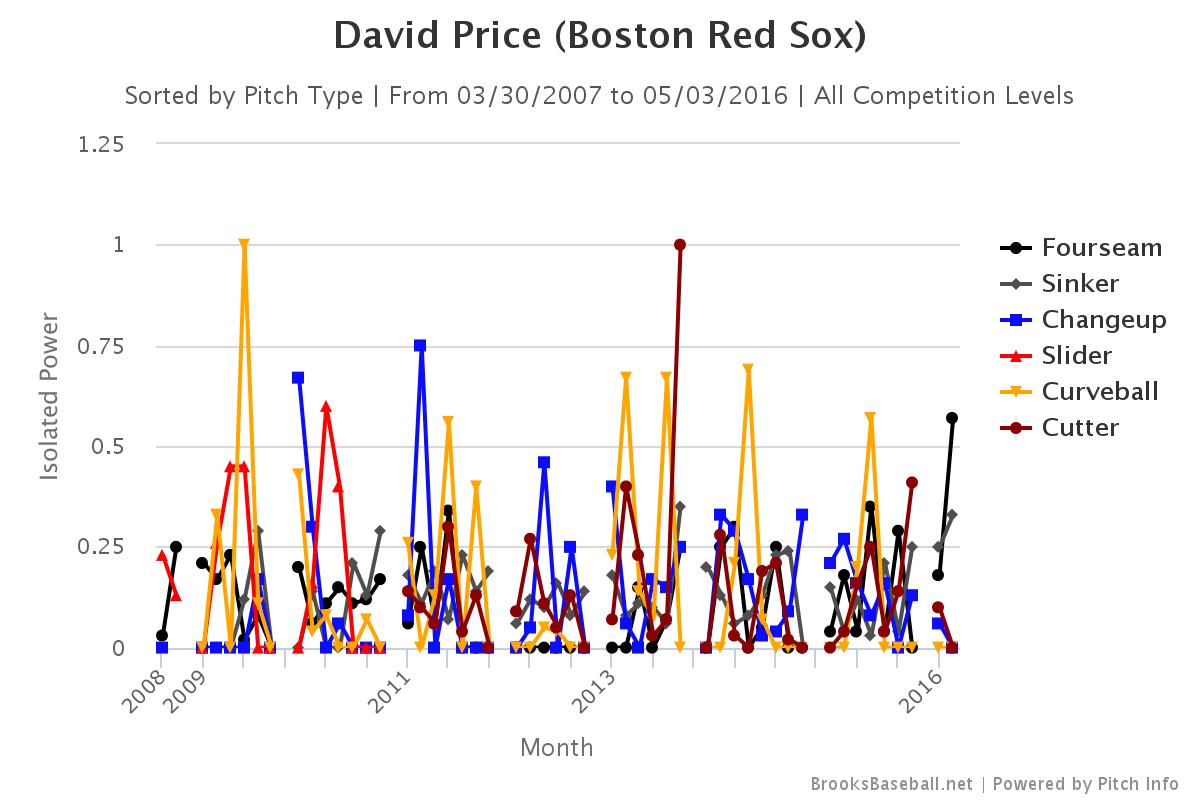 All of which is to say that something new is happening, and while it may be attributed to a small sample size, it might just be the new reality of Price. We’ll have to wait and see if the velocity in fact bumps back up (and in so doing, if those elevated fastballs become K’s instead of four-baggers) and his stats at Fenway normalize. Like Towers, Lee and Britton, I think it will happen to a degree with which we can all be comfortable, so predictions like this stop coming true:

A Yankee lineup with Ronald Torreyes and Austin Romine vs. David Price. That has to be a reverse lock for seven runs, right?

That’s spooky, and I’m sufficiently scared enough to end the column here. But I’m not scared about Price. April showers bring May flowers, and it’s time for him to bloom.

”
Towers makes a slate of great points, but starts by noting the sheer strangeness of Price’s numbers so far: ”
I do not agree. Look at: http://buckeyextra.dispatch.com/content/stories/2014/10/25/1025-penn-state/quarter-summary.html Sincerely, Joette