As of this moment, it’s hard to be upset with anything happening with the Red Sox. The lineup has been great, ranking among the best in the league across the board. The bullpen has done the job with only a few blips on the radar. The rotation, while inconsistent, has been fine and has given the team a chance to win on most nights.

That last part is the most important going forward, though, as the offense can’t be expected to keep up a record-setting pace for the entire season. All year, there has been at least one questionable rotation spot. First, it was filled by Joe Kelly. Then, by Henry Owens. Now, it’s temporarily being filled by Sean O’Sullivan. Obviously, none of those scenarios are anything close to ideal.

Luckily, there are reinforcements on the way. Or, more specifically, there is a reinforcement on the way in the form of Eduardo Rodriguez. There is no official word on when he’ll return, but the southpaw’s made three rehab starts and should be back soon. In fact, he could be back as soon as this weekend’s series against the Astros.

Now, it’s worth mentioning that the results in his rehab starts haven’t been great, and his velocity has been a bit down. With that being said, he’s getting the work he needs, and he only has so much time to work in Triple-A. When he’s right, Rodriguez is one of the more exciting players in the organization, so people are understandably anxious for him to take the mound again. The bad part of these situations is that expectations can spiral out of control. So, with that in mind, let’s try to figure out exactly what the Red Sox can plan on getting from Rodriguez whenever he gets back to the majors.

When he’s right, Rodriguez is one of the more exciting players in the organization, so people are understandably anxious for him to take the mound again.

Obviously, the best place to start in this discussion is by looking at his numbers last year. Rodriguez was solid in his first major-league season, putting up a 3.85 ERA, a 3.89 FIP, an 89 cFIP and a 3.98 DRA. Essentially, he was a league-average pitcher. That doesn’t sound too exciting, but it’s a good foundation for a 22-year-old with no prior big-league experience to build upon. Plus, the predictive cFIP likes him, so that’s a nice added bonus.

Looking a bit deeper, he was just as average with regards to strikeouts, walks and quality of contact. Starting with the Ks, he ended up setting down 7.2 batters per nine innings in 2015. For reference, the league-average starting pitcher struck out 7.8 batters per nine. Rodriguez built most of his strikeout pedigree on hitting the zone rather than blowing batters away, despite carrying a fastball that sat in the mid-90s. At the end of the year, he ranked just 94th among the 113 pitchers who threw at least 2000 pitches in swinging-strike rate. On the flip side, he ranked 26th in zone rate.

However, it’s unclear how sustainable that kind of performance is given his simply average rate of getting batters to look at strikes, per Baseball-Reference. So, right away we have something to look for. Either he needs to be more deceptive with his pitches in the zone, or he needs to induce more swinging strikes if he’s going to maintain a solid strikeout rate.

The biggest key here for Rodriguez is his slider. While he typically leans on his fastball, he needs his breaking ball to work to maximize his performance. In 2015, the pitch lost its effectiveness as the year went on. After a strong first month or so, batters stopped getting fooled by the pitch, swinging against it fewer than 50 percent of the time. 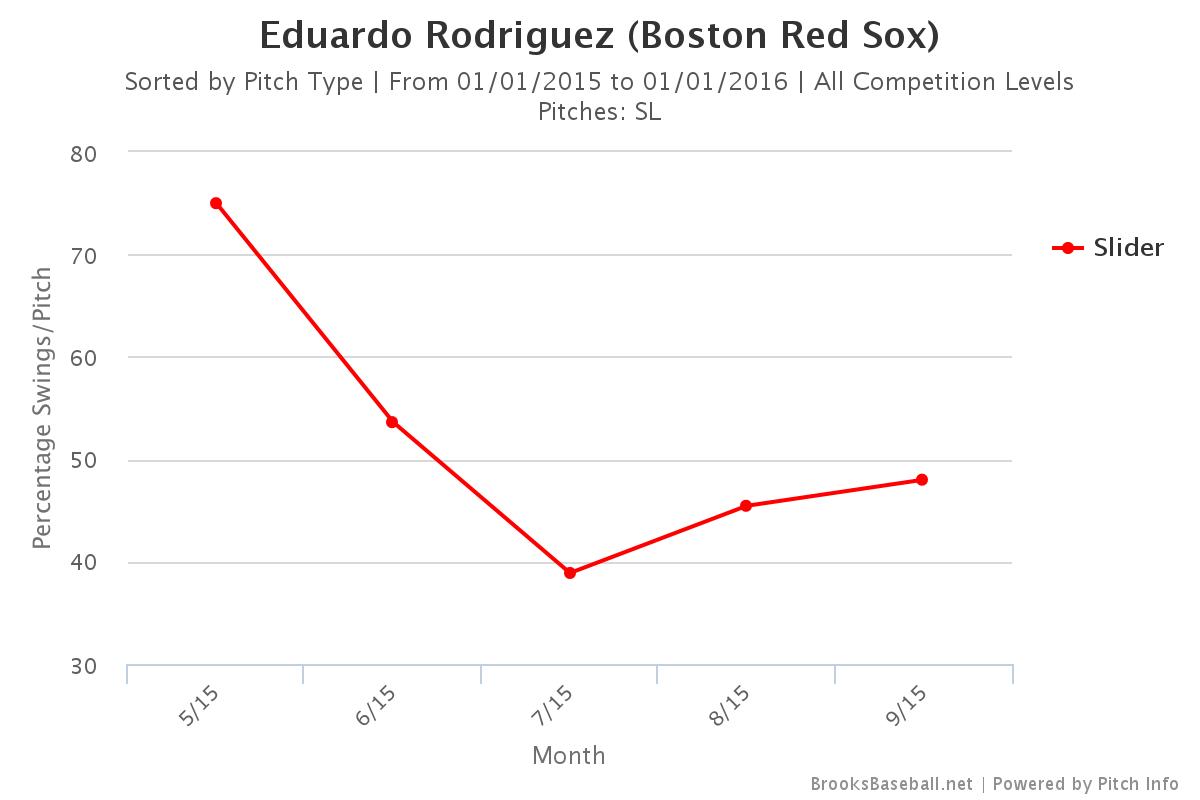 In turn, the whiffs stopped coming, too. 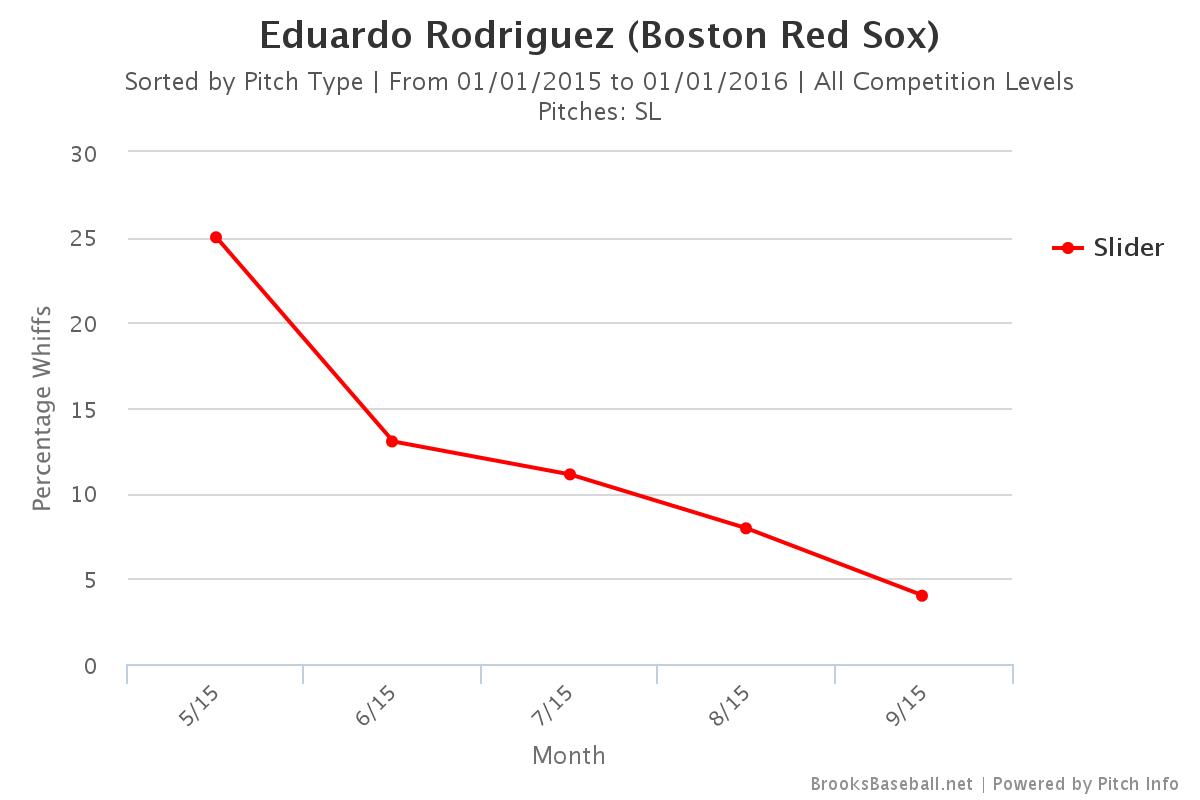 If Rodriguez is going to increase his strikeouts, keeping a sharp slider in his arsenal all season will likely be the key.

Of course, he can survive with that kind of strikeout rate as long as the control is there. Last year, he was fine, walking 2.7 batters per nine compared to a league-average of 2.9. Ideally, if he’s going to carry a league-average strikeout rate, one would like to see Rodriguez improve his walk rate. As I previously mentioned he hit the zone plenty to be effective. The issue is getting more whiffs on the pitches that he does miss on. Last year, he wasn’t able to do that as he ranked 90th out of that same group of 113 pitchers in swing rate on pitches out of the zone. Again, this goes back to his slider, which theoretically would be the pitch he’d get the most chases on.

Finally, Rodriguez was hit mildly hard last year, allowing a home run every nine innings. There is no single pitch that was the main culprit, as he was squared up on all three of his main pitches. To put a number on it, Brooks Baseball has each of his three pitches allowing line drives on at least a quarter of their batted balls. Looking at his zone profile, the issue is pretty clear: He left too many pitches belt-high in the zone. 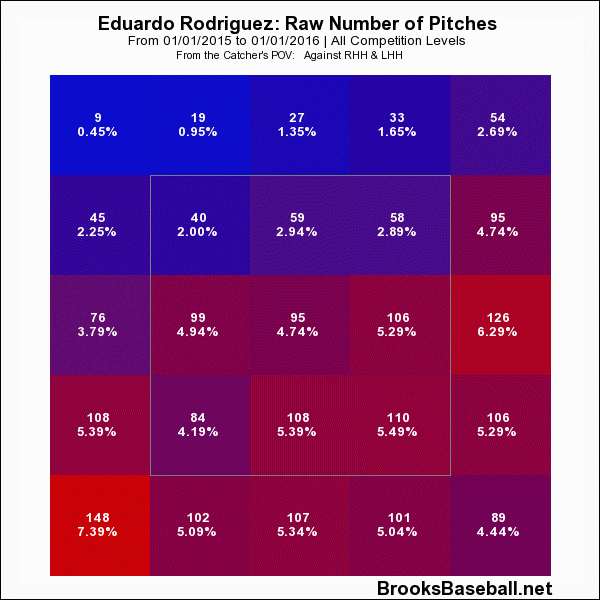 To make matters worse, we get back to his inability to get batters to chase pitches out of the zone. As you can see in the swing chart below, batters were rarely fooled and only swung at the pitches that stayed in the zone. 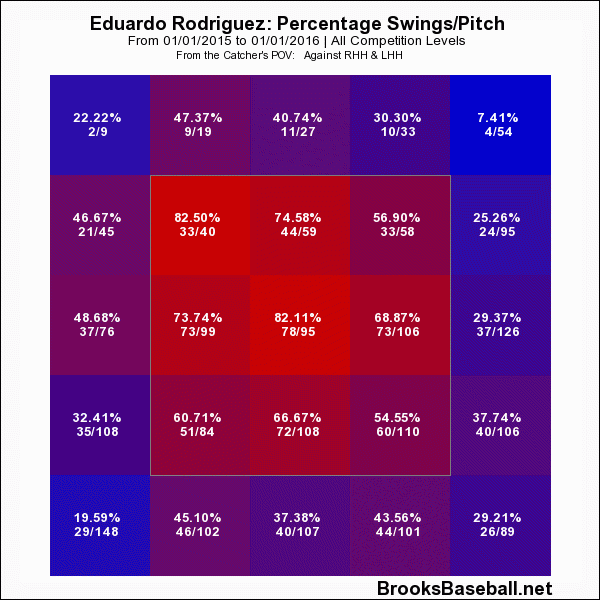 All of this indicates that, while getting Rodriguez back in the rotation is a big boost, maybe we should temper our initial expectations a bit. Just based on last season, he has a lot he needs to improve on before taking the next step. While it’s not quite as simple as a one-off solution, it all boils down to being more deceptive and getting more chases outside the zone. Essentially, it all comes down to getting more consistency from his slider.

On top of those issues, we’re talking about a pitcher who missed all of spring training, so it’s only natural to expect some rust. Luckily, with Price and Porcello, the Red Sox aren’t desperate for a top-of-the-rotation arm. In fact, as long as Steven Wright is pitching like he is, they can settle for a solid back-of-the-rotation starter.

Rodriguez should at least fill that role while he gets his feet wet in his return to the majors. I’d expect the results to get better as the year goes on, but for now I wouldn’t expect an ace-like performance from the young left-hander. There’s too much improvement to be made upon last season to expect it all at once, especially for a pitcher who has missed so much time to start the year.