If you can’t be perfect like the 2007 Red Sox, I think the best type of team to have is a stars and scrubs type. Pack more WAR-power into single positions and give the organization the chance to upgrade the scrubs as the year goes on with minor league call-ups and trades. This is preferred over having roughly average players at every position, as when that type of team goes to upgrade, the overall upgrade is a smaller one. This is how I’m talking myself into the 2016 Red Sox who, with the benefit of two months observation, have a number of massive holes in the roster. The back end of the rotation is a mess, the bullpen has been more hittable than hoped, and the depth at catcher is problem. That’s not all, of course. There’s one more: left field.

Sox fans started the season assuming Rusney Castillo would start in left, but his meekness at the plate during spring training combined with his meekness at the plate last season both with the Red Sox and in Triple-A led the team to lose confidence in him. Thus at the start of the season he was sent to Pawtucket and utility man Brock Holt was installed as the starter. The team also signed Chris Young as a lefty-bashing platoon option over the offseason. Now Holt is hurt, his replacement, Blake Swihart, is hurt as well, and Castillo has continued his ineffectiveness in Pawtucket, which leaves Young as the starter. This is a problem.

It is June 10th and Chris Young has been the second best hitter on the Red Sox.

Or is it? It’s been thought that an upgrade in left field should be among the improvements Team President Dave Dombrowski seeks to make before the trade deadline at the end of July. Big names like Ryan Braun and Carlos Gonzalez have been tossed around. But as with most big names, there will be significant cost to acquire them. Chris Young is here now. So there’s that. Also this: Chris Young is hitting .310/.383/.619. By TAv that’s the fourth best on the Sox, and really it’s the second best because the two best are Sandy Leon and Rusney Castillo, compiled in four and one plate appearance(s), respectively. Let me say that plainly: It is June 10th and Chris Young has been the second best hitter on the Red Sox. He’s been better than Jackie Bradley, better than Xander Bogaerts or Mookie Betts, better than Dustin Pedroia or Travis Shaw. Now I’ll put your thoughts on this into print as a response: What?

And my response to your response: I know!

Thing is, TAv isn’t a cumulative stat, which you should know unless you think that one double Sandy Leon hit was the most amazing double in the history of baseball (honestly, it may have been). That means when we compare players’ TAvs we have to take sample size into account. To date, Chris Young has 94 PAs. That’s not much, especially when measured against the 4,779 he’s had in his career. So know that. Know that players get better, they get worse, they learn new skills and forget old ones. And know that 94 plate appearances isn’t often enough to discern which of those things is happening.

In his career against left handed pitchers Chris Young has hit .267/.365/.482. That’s quite good. And this year he’s hitting .419/.486/.774, which is scary clown insane. But the downside of Chris Young, aside from his name and the resulting confusion achieved from accidentally getting hitting stats for a 37-year-old pitcher, is that he can’t hit right-handed pitching. We knew that coming in, which is why he made a perfect platoon for Brock Holt.

In his career, Young has hit .225/.293/.413 against righties. That’s not good, but the reality is likely much worse, as two of his three most recent seasons have seen him hit below the Mendoza line with an on-base below .250 against righties. That’s scary clown in your closet bad and you would thus conclude that Young has no business in the batters box when a right-handed pitcher is on the mound. And you’d be right. But the Red Sox were in a bit of a pickle with injuries to Holt and Swihart, and of course Castillo’s continued incompetence with the bat, so manager John Farrell made the decision to install Young as the starter in left until the injuries cleared up. So you’d expect Young to be bad against right handed pitchers, and to hopefully make up for it a bit against lefties, but that’s not how it’s gone. Instead, Young has bruised righties as well, hitting .245/.322/.528 against them! That’s not too far off from how he’s typically hit lefties in his career. A bit of a lower batting average and walk rate and a bit higher in the slugging department, but not too dissimilar.

What’s more, of his five homers, four have come against right-handed pitchers. The Red Sox have had some of the bad surprises this season, but this is undoubtedly one of the good surprises. So the question becomes how good is Chris Young, really? We know he can hit, hit with power, and get on base against left-handed pitchers, but if he can do two of those reasonably well against right handed pitchers also, well then the Red Sox are off the hook in left field and that’s great. It’s also great because they could cross left field off the list of To Do items at the trade deadline, focus on improving the pitching staff, and let other teams over pay for Gonzalez, Braun, and the rest.

So, can Young now hit sliders from right handers? According to Brooks Baseball, he’s seen 45 from righties this season and he’s done fine against them. What we can’t know, and now we’ll start to see the nuts and bolts of why small samples are important, is how good the sliders he’s seen have been. There can be a huge difference in quality when you’re talking about groups of just 45 pitches. To further illustrate this, I looked up the homer Young hit on a slider, and this is it:

That was a slider in name only, and might just be the worst pitch thrown to anyone in the majors this year. Credit to Young for doing what a major leaguer should do to a pitch of that quality, but hitting that over the wall isn’t proof that a player can now hit sliders from same-sided pitchers. It’s proof they can hit homers in batting practice.

I should note that this also isn’t proof that Young can’t hit sliders from right handed pitchers. It’s not really proof of anything. It’s one incredibly bad pitch, and that’s all.

As in so many of these types of pieces, the end result is really this: we don’t know. We don’t know if Chris Young’s success against right-handers thus far means he’s now competent enough for full-time duty in left field. We don’t know if this is just a small sample blip and his true talent remains as terrible against righties as he was last season with New York (.182/.246/.339).

All we can do is watch and see. So I’ve watched some video and compared Young this season to last season and, guess what, his stance is different. I don’t remember hearing anything about this, but he changed it rather significantly. Here he is hitting that homer off Darren O’Day’s “slider”: 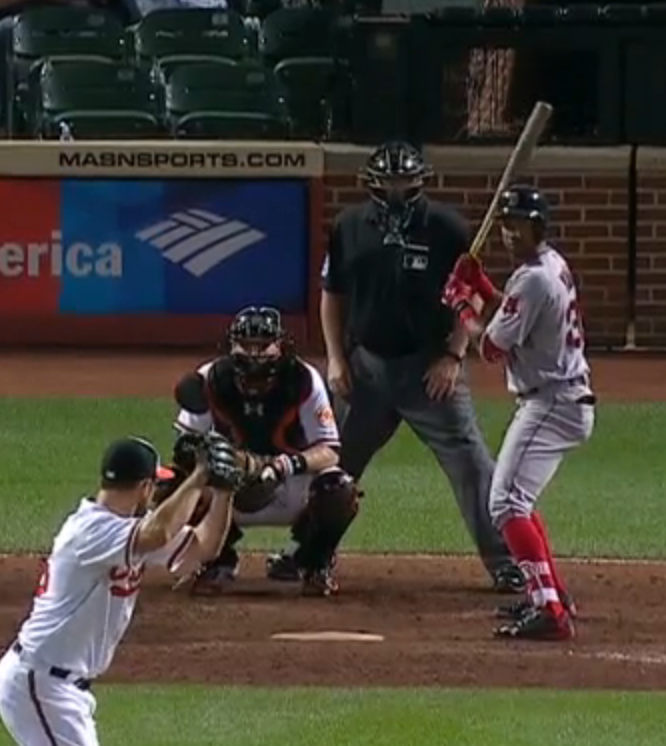 Now compare that to this, taken from early in 2015 when Young was with the Yankees.

You’ll notice with the Red Sox Young’s hands are lower and he is much more upright this season, while last season with the Yankees he was crouched down more, legs wider apart, with hands held much higher. I wanted to see if maybe he just changed his stance in 2015 and that was the outlier, so I watched some video of him earlier in his career and his 2015 stance was his stance earlier in his career as well. Here he is about to homer while with the Mets in 2014: 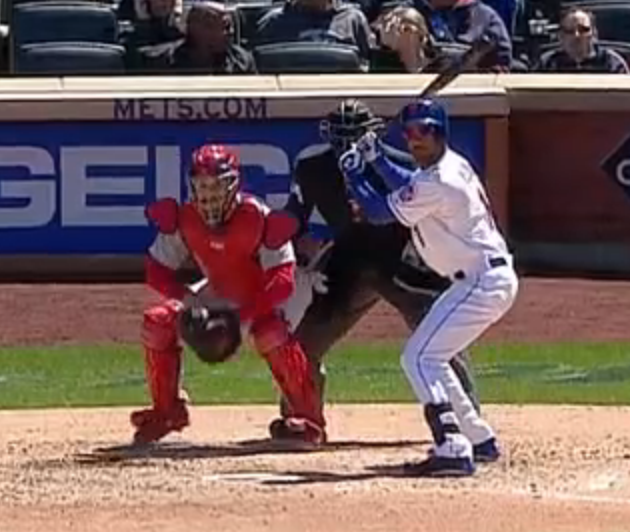 And here’s Young back in 2012 with the Diamondbacks:

So Chris Young is doing something differently and he’s getting different results. Is this new stance helping Young hit righties? Maybe. Maybe not. It’s different and so is his performance but correlation is not causation. It’s also not not causation. Chew on that in the bathroom.

For now, Young has been riding a wave of good fortune and good play. He’s never performed like this against right handers before, but he has had some decent seasons in the past so maybe, just maybe, Young can maintain something like this going forward against right handed pitchers. If so, maybe one of the Red Sox big problems has already been solved.

Very interesting article, thanks, but SHAW’S NOT HITTING! HANLEY’S NOT HITTING!! We can’t be spending our time worrying about left field when both corner infielders AREN’T HITTING!