Craig Kimbrel was a fantastic reliever, debatably the best in baseball, and in 2016, his first with Boston, he was very good. Of course, that’s not the whole story. The Red Sox gave up a ton of prospect value to acquire him from San Diego during the previous off-season, and “very good” is about the worst Kimbrel has been since he came up with the Braves in 2010. Given the short shelf life for relievers, there are some very real concerns about Kimbrel going forward. So fun, let’s recap!

Kimbrel pitched pretty well. The strikeouts are amazing to watch. The combination of his high 90s fastball and devastating (when working) curveball are legitimately unhittable. He struck out 83 in 53 innings, which is quite good. If percentages are more your thing, he struck out 37.7 percent of all the batters he faced, which is in line with his previous three seasons. He finished 47 games and saved 31, if things like that matter to you. His fastball velocity remained pretty steady (it dropped in September but not enough to generate real concern). He came back very quickly from injury at a point where the team needed him. That’s about it. Kimbrel was a good, if flawed, reliever in 2016.

There was the injury itself, which led Kimbrel to pitch fewer innings than any season since his rookie year in 2010. It was the first time he’d been on the Disabled List in his career, which is both good (he didn’t have an injury history) and bad (he does now). There was the fact that he finished the season poorly (a 9.00 ERA in September) and blew games to the Yankees and Blue Jays as the Red Sox were fighting for post-season positioning. But the top of any list of concerns about Craig Kimbrel has to start with his walks. In 2016 Kimbrel walked 30 batters in 53 innings. That’s a 5.09 BB/9 rate, which is, to be charitable, bad. It’s all the more concerning when you consider that Kimbrel walked 13.6 percent of all the batters he faced, a career high. That, also, is bad. That’s the second highest rate in baseball for qualified relievers. In a word: yikes.

If you look at his career, his walk rate has bounced around a bit, from 6.1 percent in 2012 to 7.8 percent in 2013 to 10.7 in 2014 back down to 9.2 percent in 2015 with San Diego, and then up to last season’s 13.6. It’s not a perfect line but you don’t have to squint to see a gradual climb happening. Kimbrel can remain an effective reliever even with that borderline debilitating walk rate because his strikeout rate is so high, but he can’t be elite with it. And, if it rises much more and/or the strikeouts start to diminish, then there’s going to be a real problem. So, what happened?

Perhaps the problem was a simple one of not throwing enough strikes. With Kimbrel’s stuff he can miss the zone with regularity, and really, that’s kind of his approach. It works because it’s harder to square up a pitch thrown outside the zone but also because his stuff is so good that batters routinely get fooled and expand the zone by chasing. Kimbrel did throw fewer strikes in 2016, and in fact, he posted a career low strike percentage of 42.1 percent. That after being in the mid-40s most of his career.

According to Brooks Baseball, it was Kimbrel’s fastball that dropped from 44.25 percent in-zone to 42.04 that was the main culprit. His curve actually was in the zone a half a percent more often than in his career previous. So by looking at those numbers, it appears like the fastball was actually at fault for the rising walk rate.

That might not be right though. Look at these two charts. Here are Kimbrel’s curveballs and where they’ve gone from 2010, again, his rookie year, through 2015, his sole season with San Diego. In particular pay attention to the bottom right square. 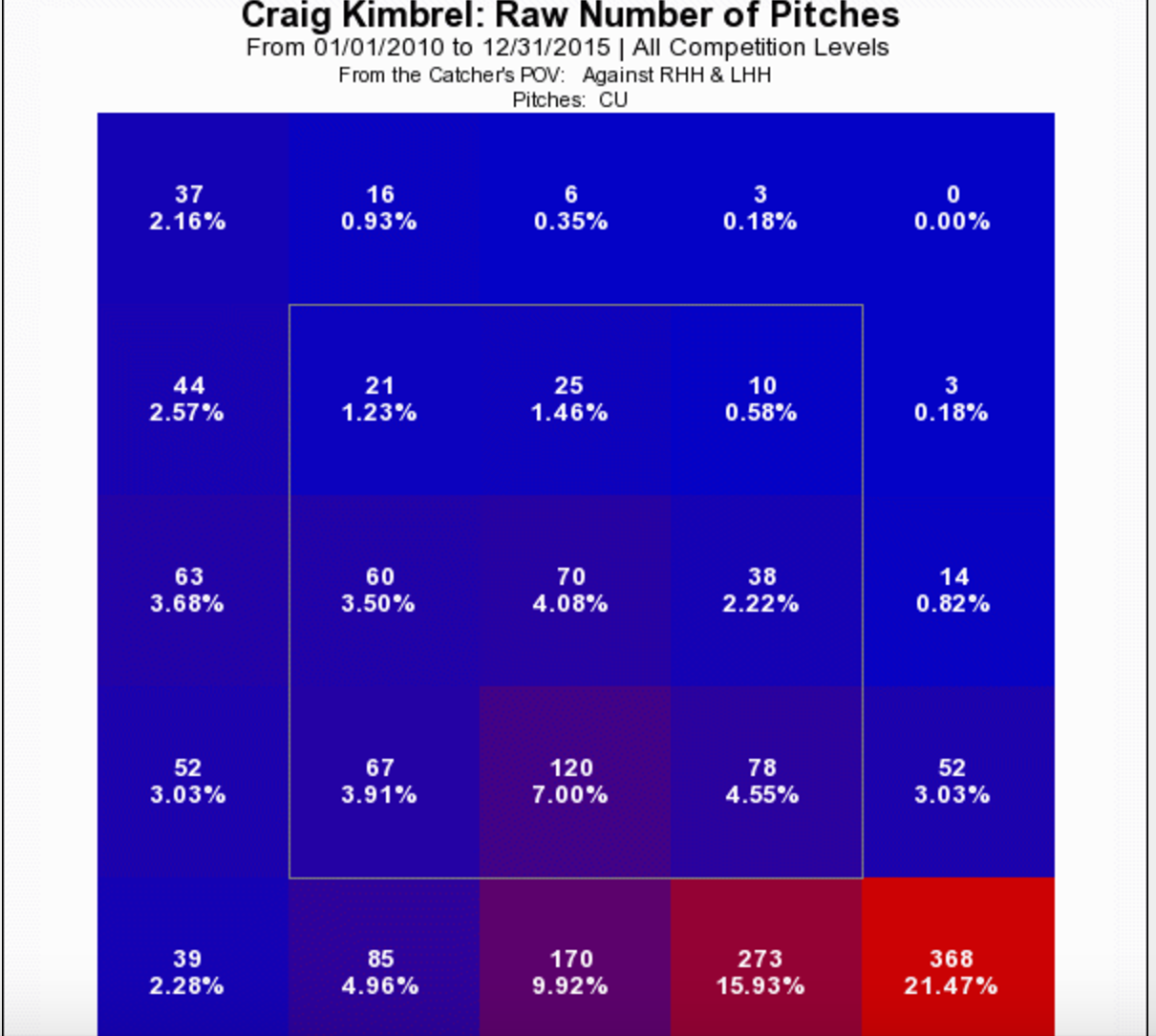 Now look at the same data, only from last season. 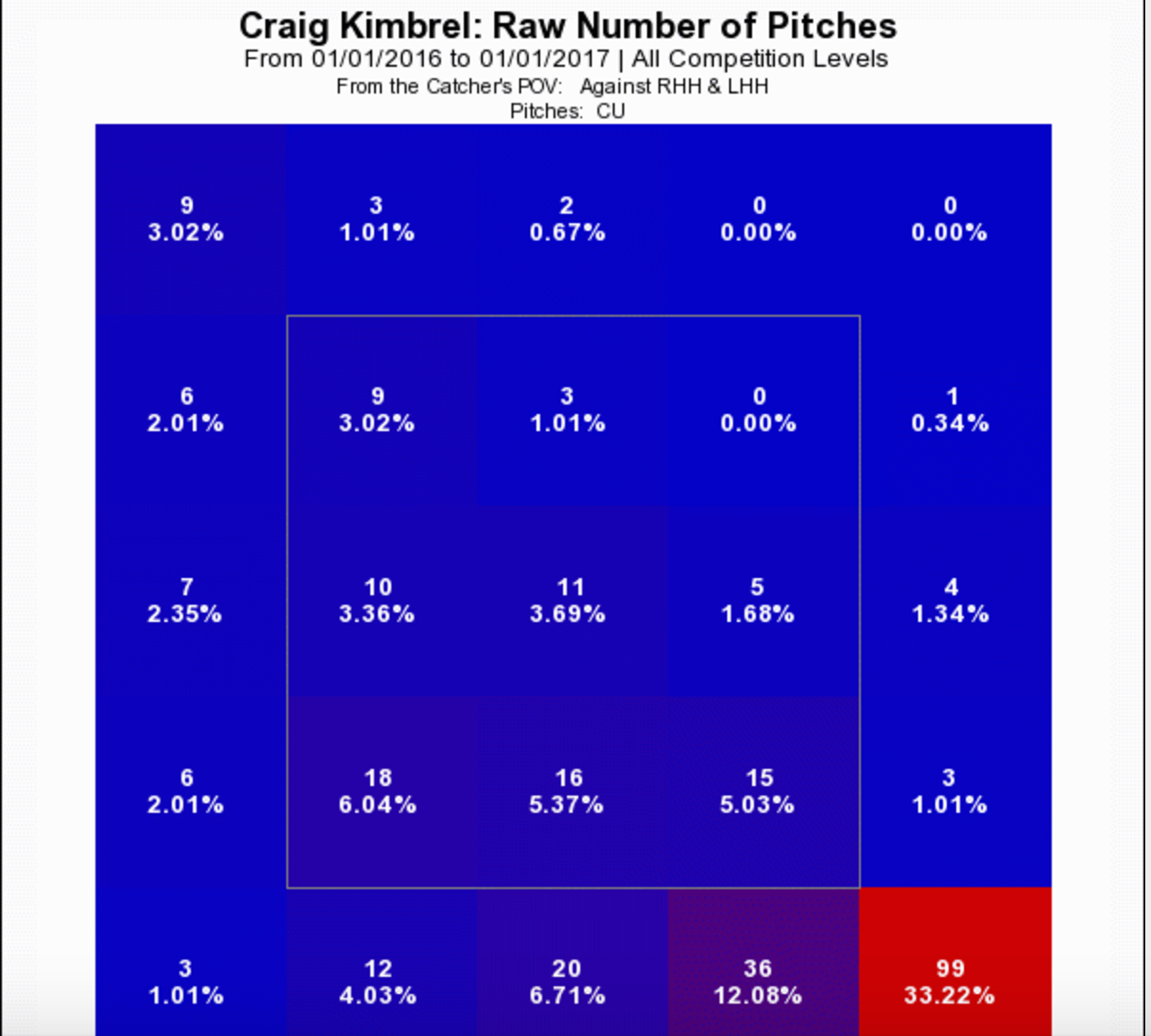 The number is even bigger now, 33.22 percent! Even more success, right? Well, no, I don’t think so. You’ll notice that the chart has only one square outside the zone. Therefore it counts a pitch just a half inch out of the zone and a pitch two feet out as the same. And I think that’s at least in part what the problem is. If you watched Kimbrel in 2016, you likely saw him “pull” a curve or two. What I mean by that is he over-threw the pitch so that it ended up way outside the zone to such an extent that no hitter would ever offer at it. That serves two purposes, both negative for Kimbrel. One, it’s an obvious ball, and as such, one that is never going to generate a strike. That leads to a decreased strike percentage and worse counts. Also it puts hitters on his fastball. No major league hitter is going to stand at the plate, see Kimbrel throw a curve eight feet outside and think, “I better watch out for that curve ball.” Instead, he’s going think, “Fastball.” Then you’ve got a hitter ahead in the count who is sitting on the fastball. A major league hitter can’t hit Kimbrel’s fastball if he’s also trying to hit his curveball, but he can hit it if he isn’t worried about the curveball. So in that way, this lack of command of his curveball had the duel effect of hurting both his fastball and his walk rate.

If you put all this together, you get a Craig Kimbrel with the same level of stuff but less command of it. This is scary.

It’s possible the old dominant Kimbrel is in there somewhere, a mechanical tweak or two away. We saw him a bit, here and there, in 2016. There were 25 appearances last season where he struck out multiple batters, gave up one or fewer hits, and allowed no runs. So maybe. But if forced to guess, the most likely possibility is that 2017 looks a lot like 2016. There might be some bounce back, maybe a bit better luck (or not), but the reality is that though the strikeout numbers are still there, the walks and lack of command are killers. The guy who was the best reliever in baseball, the guy Dave Dombrowski gave up three very good prospects for, is probably gone forever.

Kimbrel and Cishek posted these stat lines in 2016: