A few weeks ago, Matt Kory wrote about the lack of Red Sox homers, and how even though they were hitting the ball hard, it just wasn’t being hit hard in the air. The homers have happened, but one player in particular has hit fewer fly balls than he ever has before, and he’s still making it work: Xander Bogaerts. 32 games into the season, and Bogaerts has hit zero homers. Usually, for a newly-anointed 3-hole hitter, that’s a glaring issue. Not for Bogaerts. He’s hitting at such a level that even with a goose egg in the dingers category, he might be becoming an even better hitter.

To get a good grasp of what’s going on, you need to know how Bogaerts generated his power before 2017. Tell me what you see here. Okay, now this one. Lastly, look at this. Notice anything similar about those homers? The main thing about all three of them – and every one of his 21 home runs in 2016 – is that they were pulled. Bogaerts has never been lacking in the power department whenever a pitch drifts too far inside. Just look at his career spray chart and see where all of his homers have landed. 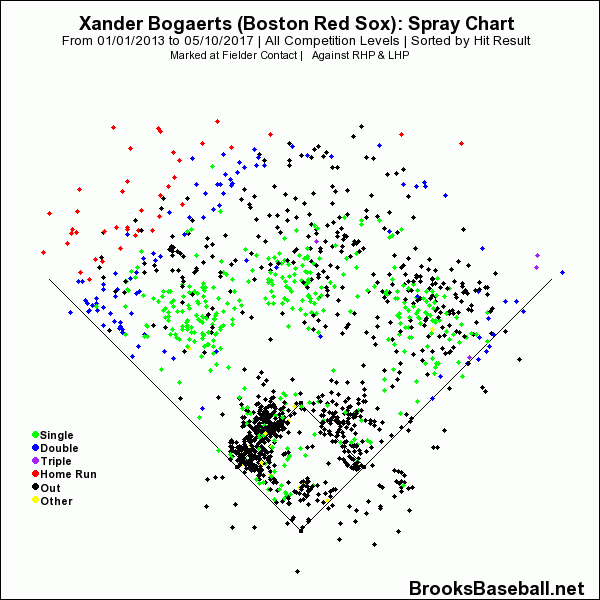 You can definitively say that all but two or three of the homers he’s hit in his career so far have been pulled. The last time he went to the opposite field with a dinger was in September of 2014, his first full season in the bigs, and that pitch was such a meatball that he could’ve hit it anywhere and it would’ve done serious damage. Since then, whenever Bogaerts has shown off raw power, he’s looked for something inside that he can yank to left field, because that’s his wheelhouse. Xander knows his strengths when it comes to, uh, strength: 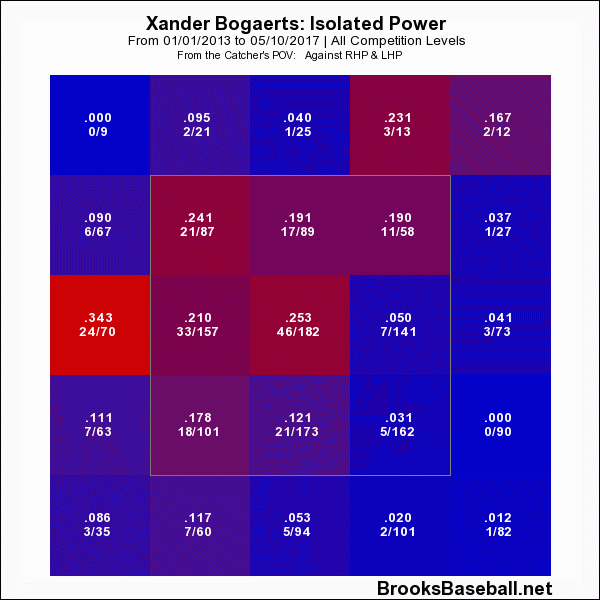 If it’s inside or chest-high over the plate, he will punish it. He showed that power potential in the minors, and since becoming the starting shortstop, he’s shown it off.

So what’s a pitcher to do when a hitter capitalizes on pitches anywhere near his hands? Throw away from him, of course. You’re not going to continue to challenge a guy who has shown you for three years that he can destroy anything on the inside part. Hell, in that third home run from earlier, Bogaerts hit a homer from a pitch that was about a foot off the plate and at his ankles. That’s more than a little terrifying.

So, as the 2017 season progresses, we get a clearer picture of how pitchers are throwing to Bogaerts. Fastballs – both of the four- and two-seam variety – and sliders are the norm, as those three pitches make up over 68 percent of what he sees. Pitchers are trying to take away his power by going farther and lower outside. 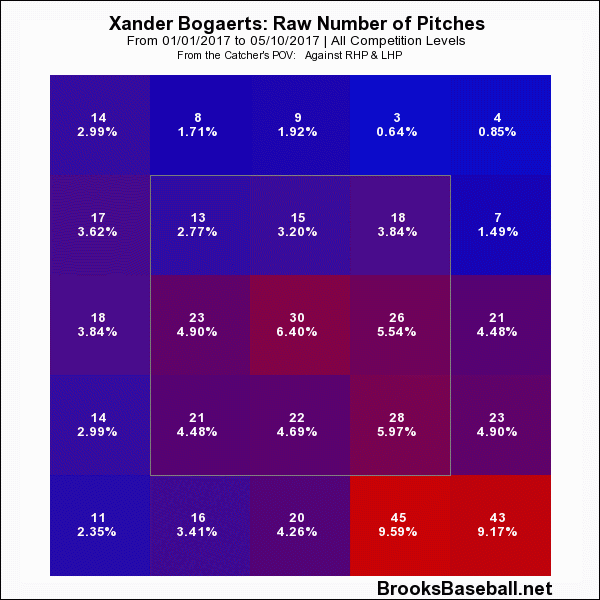 Roughly 40 percent of all the pitches he’s seen have been low and away. There’s a lot less red on the left side of that graph, as the attempted neutralization of Xander’s pull-power tendencies becomes more apparent. It’s sort of worked. Bogaerts has a .083 ISO this year. Obviously, that isn’t great, and you’d want more out of a guy who gloriously annihilated baseballs at every level in the minors.

Thing is, Bogaerts is still hitting .333/.385/.417. That’s pretty damn good, lack of homers aside.”But wait!” you say, as you crack your knuckles and prepare to own me online. “His BABIP is a crazy .379! There’s no way that’s sustainable!” you claim. When you look at his batted ball rates, Bogaerts’ BABIP actually looks feasible. He’s eschewed fly balls – of which 60 percent are pop-ups anyway – for line drives and grounders, which will naturally give you a higher BABIP, especially if you’re a good runner like Bogaerts. This batted ball distribution is similar to 2015, when Bogaerts had a .372 BABIP and hit .320/.355/.421 with a .266 True Average. If we’re going by just BABIP and batted balls, Bogaerts is fine.

Except it’s more than that. Since pitchers have been throwing outside more often to him, Bogaerts has had to adjust, and by being able to go the other way, he’s forcing pitchers to go back to the drawing board when it comes to pitching to him.

He couldn’t do that in 2014. He’d whiff or foul that off. Now, that’s just a matter of getting the bat on the ball and flicking it out over the infield. The vast improvements Xander has made when it comes to making contact cannot be overstated. He’s swinging fewer times overall – more selectivity, also very good – but making more contact. Last year, he made contact on just over 81 percent of his swings. That’s solid, nothing special, but it isn’t bad. This year, it’s over 87 percent, and he’s whiffing at a career-low 5.5 percent. So not only is he being more selective, when he swings, he doesn’t miss. Usually this is where I say the power is coming, but maybe it’s already arrived. We’re dealing with a ton of small samples here, but I will mention that Xander has a 1.120 OPS to the opposite field. Food for thought! (It does help when Robbie Grossman doesn’t know how to run good routes.)

So now that Bogaerts has made the adjustment, it’s on the pitchers to counter. The only way they’ve been able to get him to whiff consistently is by burying off-speed pitches at the bottom of the zone, and with Bogaerts’ improved eye at the plate – his strikeout rate has already dropped six percentage points from 2016 – that seems like it’ll end up being a losing proposition. They can’t try and jam him by going back inside, because they’ll be in danger of letting Bogaerts tee off by yanking one into the left field bleachers. Going high is tough, because as we saw with his ISO zone chart, Bogaerts can still catch up to anything upstairs, and if there’s a hanging off-speed pitch, that ball is not coming back. With counters being hard to find, you wouldn’t be wrong in saying that Bogaerts has become a good all-around hitter, and you might even be underselling him a bit.

It’s tough seeing Bogaerts not have a single round-tripper yet. But it’s coming. Bogaerts is too good a hitter to not knock a few over the fence, and pitchers are already having trouble keeping him in check. He’s still hitting balls where they aren’t, he’s getting on base, and he’s not swinging at pitches he can’t do anything with. Pitchers are staying away from his power stroke, but they’re still getting burned by his contact skills. In 2015, the power slowly came alive as the season went on. If that happens again in 2017, we may see Bogaerts turn into a great hitter who quite literally hits everything. It’s hard to get better after the last two seasons he’s had, but with these improvements, Bogaerts looks to be taking another step forward.