After Friday night’s loss, another in which the Red Sox scored three or fewer runs, I was all set to dig into the oddities of the paltry offensive output to this point in the season. As it turns out, all the Sox’s bats needed was a little more seasoning with the Twins’ pitching staff to really come alive. With back-to-back games of 10+ run efforts, the Red Sox increased their runs per game by half-a-run to a much more reasonable 4.4. It can still be better, but given the show they put on this weekend in Minneapolis, it is easy to see why so many expected them to be one of the top offenses in baseball this season. Sunday’s top of the ninth inning was a lot fun. Sorry, Twins fans. But for all the glory and reassurance that happened in the top half of the inning, it was something in the bottom half of the inning that caught my eye. See if you can see it in the following two zone plots: 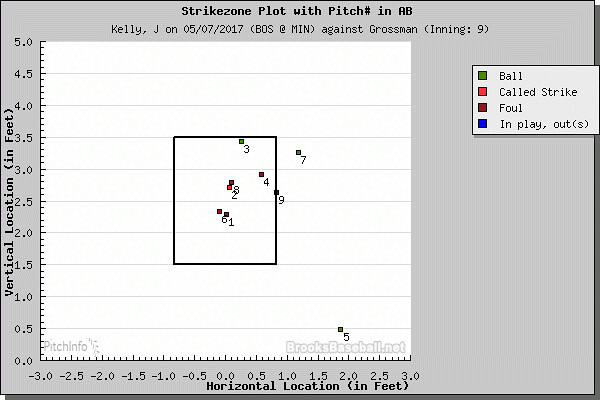 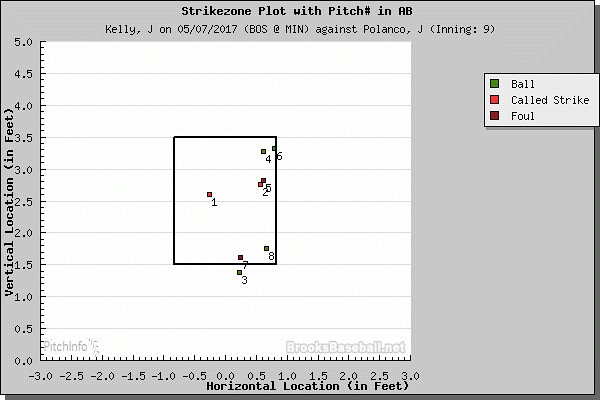 I admit it is somewhat tricky to see, but I am trying to point out that Joe Kelly started both of the first two hitters he faced on Sunday with two strikes. Going 0-2 to both batters is good. But he needed seven more pitches to get Robbie Grossman to ground out, and ended up walking Jorge Polanco on eight pitches. I know he got hosed by the ump in the Polanco at-bat, but the walk is not good. Joe Kelly routinely throws his fastball 100 mph and can back that up with a decent-ish slider or curveball. The team was winning 17-6. Grossman is a pretty good hitter. Polanco is not. Kelly should be able blow these guys away and get everybody home for the day.

For Kelly, this issue – not striking batters out with his overpowering great stuff – is not isolated to his mop-up duty on Sunday. On the season, Kelly’s strikeout rate (K%) as a reliever is down almost 20 percentage points from last season. It is still early (he has only thrown 16.0 innings), so a few of multi-punchout innings will change things quickly, but the drop through the first six weeks is concerning. While the exact reason for Kelly’s drop in strikeouts is not clear, there are thing that jump out. For instance, his ability to get batters to swing and miss dropping from previous levels on all three of his pitches: 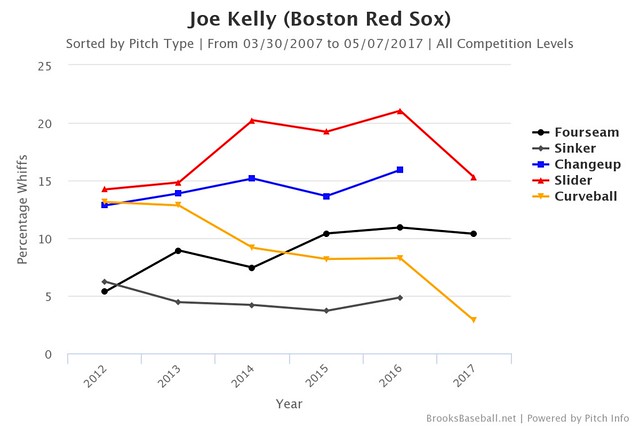 Batters making more contact against him will certainly limit his strikeout totals, but it is not the case that batters are jumping at his pitches early and limiting him from getting to strikeout counts. As he did on Sunday, Kelly is often getting batters down to two strikes, but he is not finishing the battles with strikeouts the way he did last year. Kelly’s outing on Sunday reminded me of a discussion that Ben and Jeff (or is it Jeff and Ben? Are we even doing that for this new duo?) had on the 1029th episode of Effectively Wild about pitchers who were adept at getting to two-strike counts, but not so adept at striking batters out. This year, Joe Kelly is one of those pitchers. According to Baseball Savant, Kelly has thrown over a third of his pitches with a two-strike count. That ranks 29th among the 407 pitchers who have thrown at least 100 pitches this season (through Sunday’s games). Kelly’s inability to convert those two-strike plate appearances to strikeouts has him on the other end of things: among that same group of 407 pitchers he ranks 400th in two-strike strikeout rate. The plot below shows how odd Kelly has been: 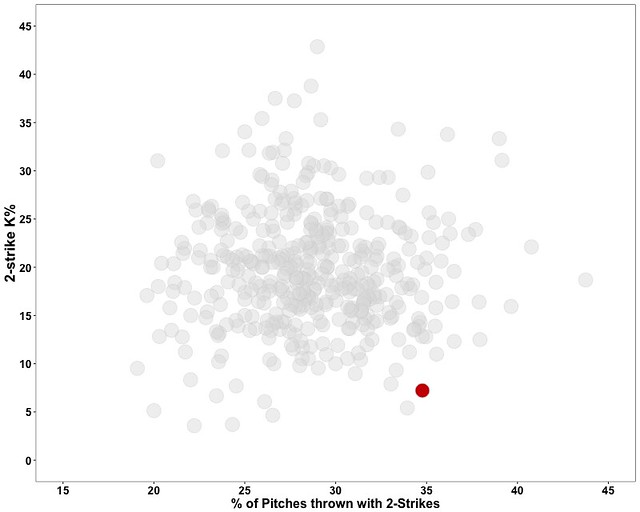 He has no problem getting to two-strike counts, but once there he has not been able to send batters walking solemnly back to the dugout. The obvious suggestion is that he needs to hone a put-away pitch. Throwing hard, as he does, is nice, but major league hitters can hit hard. Perhaps he needs to take something off to increase the movement on his fastball. Or more reliably locate his slider on the edge of strike zone (away to righties, in to lefties). Of course, this is easy to say from my seat at home, and Kelly has likely already considered putting them into practice and that is another thing entirely. But, jokes aside, Kelly has the stuff to do it and resume being the dominant reliever he was for a couple of months last year. Him getting back to being a dependable option for John Farrell in high-leverage moments that really demand a strikeout would be a welcome development.

Interestingly, Kelly is not the only one in the Red Sox bullpen having some difficulty finishing batters off once getting them to two-strikes. Heath Hembree owns the third-highest rate of two-strike pitches at 39.65 percent, but like Kelly is below average in those two-strike pitches turning into strikeouts. If you want to see where he falls on the scatterplot, go here. It is difficult to complain too much about Hembree’s performance so far this year. He has been great and is actually striking batters out at a higher rate than he ever has since coming to Boston. Imagine if he converted more of those two-strike counts. Maybe those old ‘Closer of the Future’ projections were not so far off base.

Kelly and Hembree are important parts of a Red Sox bullpen that has been really, really good to this point in the season. It stands to get even better if these two start converting more strikeouts, and Tyler Thornburg and Carson Smith eventually return in the form that they were last seen. All this count-based analysis could just be an early-season mirage and they will naturally return to average-ish levels over the next six weeks. Better yet, Kelly and Hembree could continue to throw strikes, but refine their put-away pitches and rack up more punch-outs. As we’ve seen, they’re just one strike away.