Good news everyone: the magic number for the division crown is down to eight. The Red Sox came into the season as favorites and, despite much handwringing, they have spent more days in first place than in any other place combined. To sweeten the deal, these Red Sox have offered up a wondrous amount of free baseball, with the latest instance coming in Tuesday night’s 1-0 win over the Orioles.

The game was the Red Sox’s 18th extra inning game this season, which is the third-most in baseball this year, trailing only the Blue Jays and Giants, who have each played 19 extra-inning affairs. Those teams have played more extra-inning games, but they significantly trail the Red Sox in the number of extra innings. The good and fun fellas in Boston have played 59 extra innings, 12 more than the Jays and 14 more than the Giants. It’s not like the Sox are out there offering free Werther’s Originals or some other trash candy, they are giving out the good stuff, winning 15 of their 18 beyond-nine tilts. Compare that with Toronto, who only has five wins in their 19 extra-inning games. In any case, all of this extra, tense baseball being played by the Red Sox got me thinking about leverage, and something Jeff Sullivan of FanGraphs wrote a little while back about how, by average leverage index, baseball has been boring this year. Not so in Boston.

The idea of boredom is a subjective issue, but as Sullivan points out, average leverage is at its lowest point since it has been something we record. Given that leverage index (LI) essentially measures the tension of a situation, so if it is low, as it has been in 2017, then the game(s) are lacking some excitement. LI has nothing to do with pennant races, or win streaks, and doesn’t know that Andrew Benintendi is standing in the batter’s box with his beautiful flow going. It is a plate-appearance-by-plate-appearance-within-a-game thing. As such, the LI of a game between the Phillies and Padres in May can be identical to that between the Blue Jays and Orioles in last year’s Wild Card game. Your average baseball situation has a leverage index of 1. High leverage is greater than 1. It is a number that attempts to measure that feeling of your stomach fluttering as you watch your team in close games. You know like, for example, an extra inning game where a single swing of the bat can send everyone home.

With all of the extra innings (and other close games) the Red Sox have played this year, 11.4 percent of their plate appearances and 9.2 percent of their batters faced have come in high leverage moments. On the offensive side of things, that is the third-highest rate in baseball, while the pitching mark is middle of the pack at 15th. After combining hitting and pitching numbers, the Red Sox’s 1.02 average leverage index is the third-highest in baseball this year: 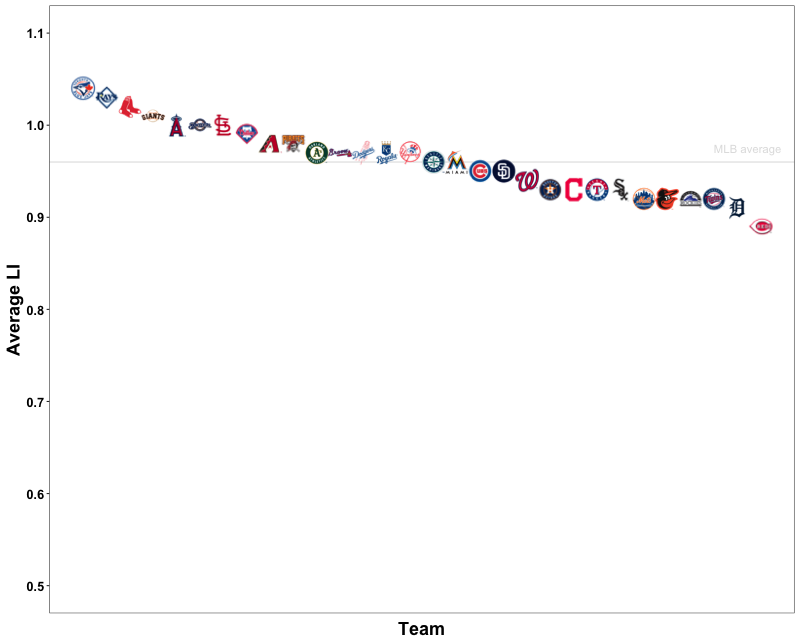 You can see that there is not a lot of spread between highest and lowest. Nevertheless, the Red Sox’s 1.02 LI is 6.25 percent above league average (LI+, I suppose), which is a top-50 mark all-time. I am not sure that is necessarily interesting, but it is another example of how this team has stood out within the current season. You can see that leverage does not care much about pennant races or other season-long notions of a moment’s importance, as the also-ran Blue Jays and Giants are near the top; all those extra-inning games have impacted their LI as well. Unlike those teams, and a few others on the left-side of that figure, the Red Sox have played playoff-position-relevant games all year. Their life in the high-leverage lane is perhaps even more impressive when considering the constant importance of winning games in order to keep a safe distance ahead of the Yankees. But is it meaningful?

Given all of the above, there certainly exists a temptation to describe the Red Sox as a battle-tested team that will be ready to handle the intensity of playoff baseball. They will be able to ‘Take-17’, as the new terrible slogan goes. Of course this might be true. After all, it is clear they have earned considerable reps in tense moments and won a lot of extra-inning games. But while the pitching (and defense) has performed well in high leverage spots, the offense has not; a general truism for the season. Regardless, are those moments the same, or even similar enough to playoff games to actually help? Do they accumulate to provide something tangible? I have no idea. Maybe. At the very least they are experiences that can be drawn upon. Alternatively, playing six games worth of extra-innings and many other tense moments has worn them out, and it would have been better if they just crushed fools all year and leisurely worked through more low-leverage innings (e.g., Cleveland and Houston).Again, I don’t know which is better. But if/when the Red Sox do win a bunch of games in October, I think we should be hesitant to ascribe the October wins to their experience above the leverage line over the course of the season, character-narratives be damned.