Lost in the Red Sox’s spectacular first few weeks, Andrew Benintendi’s second full season has gotten off to an underwhelming start. He’s hitting .243/.365/.400 through his first 19 games, which is definitely not cause for celebration, but also not cause for concern. Their abysmal catching duo aside, the only everyday hitter in the Red Sox lineup that’s been worse so far has been Jackie Bradley Jr. It’s certainly not the month most people expected from the guy hitting out of the two hole on Opening Day. What’s happening?

At first glance, taking a look at his plate discipline numbers doesn’t help much. He’s shown some gradual improvement – swinging less at balls and more at strikes than he did last season — but he’s swinging at roughly the same rate (44 percent) as he did last year. He’s even making more contact, too.

The slow start is a two-pronged issue. To start, take a look at where he’s being pitched to this year as opposed to the season before. Here’s his 2017 and 2018 pitch map side by side: 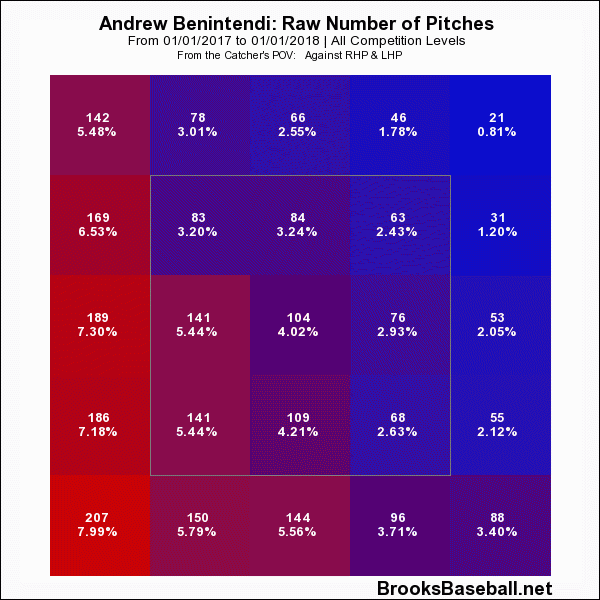 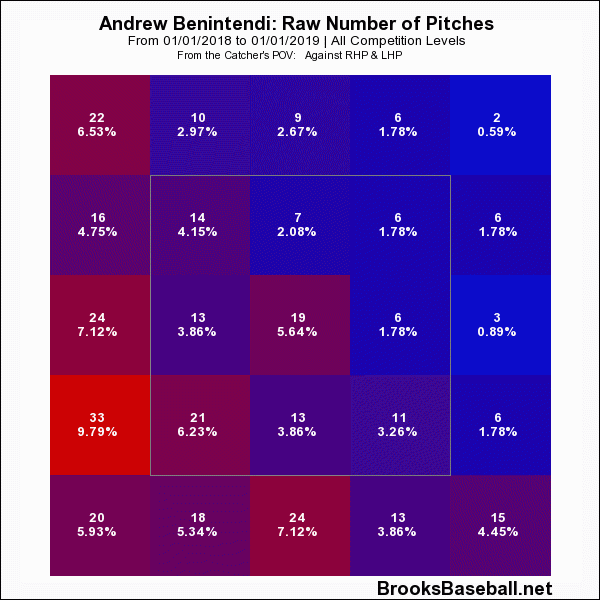 He’s just not getting as many good pitches to hit. It’s clearly still early, but you can see that Benintendi isn’t getting as many strikes this year.  It’s obviously a big reason why Benintendi’s drawing more walks. After drawing walks 10 percent of the time last season, he’s raised that number to over 16 percent in 2018.

Secondly, he’s not making the strong contact that he made last year. That makes sense, given the nature of how pitchers are attacking him, but Benintendi has struggled to adjust up to this point. Despite making contact at the same rate that he did last season, he’s only made hard contact 21 percent of the time this year. Given that he made hard contact 34 percent of the time last season, the sharp drop speaks for itself.

The good news is that after an icy-cold start, he’s hitting .278/.325/.427 over the last 14 days. He’s been making hard contact 29 percent of the time during that span too, a welcome trend in the right direction. One of Benintendi’s greatest strengths as a hitter is his ability to make quick adjustments, and this recent stretch has all the makings of just that.

Once Bogaerts returns and is demonstrably stable on his ankle, the team should do with Beni what they did in 2017: shock therapy in the form of sending him down to Pawtucket to regain his swing and eye. They’ll have Lin/Nunez to cover 2B and Holt/JD/Swihart to cover LF in Beni’s absence. Then when he comes back, down goes Devers for his own refresher if he’s still swinging at air.