Editor’s Note: Welcome to Fenway’s Future, a weekly series we’ll run that will aim to keep you up to date with all of the most impressive and depressing performances of Boston’s top prospects. As the season progresses we’ll bring you weekly performance recaps, but for now, we’ll start things off with a look at some of the main attractions across four levels of the Red Sox’s talented minor league system.

Much has been made about the depth of the Red Sox organization. Triple-A Pawtucket is an excellent example of this, as Keith Law ranked the PawSox (Insider) as one of the best seven rosters in the minor leagues. The Pawtucket team has six of Baseball Prospectus’ top 10 and Law’s top 10 Red Sox prospects and three of those six are the starting pitchers we will focus on here. Henry Owens, Eduardo Rodriguez and Matt Barnes will all be in the rotation for Pawtucket this season, but could see time in Boston later this summer.

Owens has already made two starts with Pawtucket this year: one good one (6.1 IP, 1 H, 1 R, 0 HR, 4 BB, 4 SO; carried a no-hitter into the sixth) and one bad one (4.2, 3 H, 4 R, 1 HR, 6 BB, 4 SO). It is still too early to make grand proclamations about the 22-year old, but the progression in his performance against AAA hitters will be telling for how soon and in what role he is throwing innings for the big league club. 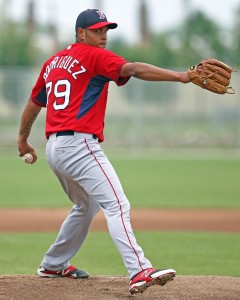 Eduardo Rodriguez has impressed since coming over from Baltimore

Rodriguez, who the Red Sox acquired in the Andrew Miller trade with Baltimore last July, has one start under his belt this season and for the most part it went well (5.2 IP, 5 H, 1 R, 0 HR, 0 BB, 4 SO). He dominated at Double-A Portland in 37.1 IP last year (0.96 ERA, 2.42 FIP), so like Owens, seeing how he works through AAA lineups multiple times will determine if he ends up as a relief pitcher or starter at the big league level.

Matt Barnes has also taken the ball for one start in the early going of the Pawtucket season. His outing did not begin very well, as he allowed 3 runs in the first inning. But he settled in for the next two innings, before the game was postponed due to rain (3.0 IP, 2 H, 3 R, 0 HR, 3 BB, 3 SO). Of this trio, Barnes seems most likely to be destined for the bullpen at the major league level, as he is still lacking a consistent third pitch, and performed reasonably well as a reliever for Boston in 2014 (3.47 FIP, 15.4 K-BB%).

For the time being the Red Sox rotation and bullpen are fine, but as the season progresses reinforcement is certain to be needed and this means that one or more of the Owens, Rodriguez, Barnes group could have an important role in Boston. They could slot in as a spot starter to give one of the current rotation members an extra day of rest, fill in as a swingman on nights when Clay Buchholz or Wade Miley match recorded outs and runs allowed totals, or be used in high leverage innings down the stretch.

The use of this upper-level pitching depth is something that BP alumnus Joe Sheehan mentioned in the Red Sox preview of his newsletter, and in his appearance on The Will Leitch Experience podcast. He has suggested that this pitching depth is a critical factor that sets the Red Sox apart from the other teams in the American League. The Red Sox have built what amounts to a 35-man active roster, with all the outfield depth and pitching talent that is ready to make the trip from Pawtucket to Boston when needed. Of course this depends on these players developing their ability, but they are assets that loom for the big club, and it is nice that the Red Sox do not necessarily need to rush them up.

The Portland Sea Dogs may receive the least attention of the organization’s minor league squads. This is likely because the team does not currently have one of the top-ranked Red Sox prospects, but there are still interesting players at this level. Pat Light, all 6’6”, 215 lbs. of him, was a first-round-supplemental pick in 2012 (37th overall). That year he pitched well in 30.1 innings at Lowell, but his development was then stalled for health reasons in 2013 and he only threw 24.1 IP across rookie ball and Low-A Greenville. He spent most of 2014 at High-A Salem, where he struggled (4.67 FIP, 4.7 K-BB%). Light typically throws his fastball 92-95 mph, but in his 108 Stitches column/newsletter, Alex Speier reported that this spring Light was sitting 95-97 mph and at times hitting 99 mph. Light credits a new throwing approach that reduces the use of his legs to generate power, and focuses on getting more extension with his arm to generate more power. So far this season, the strikeout results seem to back up the increased velocity, as he has struck out 9 of the 27 batters he has faced with Portland. Although, given the relatively low batters faced total, it remains unclear if he has truly developed strikeout stuff. If he can stay at the current level his progression to the big leagues may move faster. Until this year, Light had been a starter, but he is now used out of the bullpen, which is probably his best bet for getting to the majors. Like the Triple-A guys outlined above, he could fill a late season role in Boston. 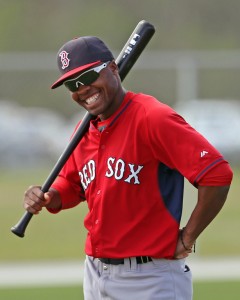 Manuel Margot could be Boston’s best prospect by this time next year.

More Red Sox outfield talent! Margot was ranked as the Sox third best prospect by the Baseball Prospectus team, and fifth by Keith Law. Margot spent most of 2014 at low-A Greenville, but had 56 plate appearances with Salem at the end of the year and did not disappoint, hitting .340/.364/.560. The 20-year old has picked up where he left off, starting this season with a .370/.393/.741 line in his 28 PAs. Perhaps the best part of his performance in the young season is that he has yet to strikeout. He has speed, which helps his defense in the outfield and makes him a positive contributor on the base paths, but he still gets thrown out stealing too often (career caught stealing percentage of 25%). He will need to improve as a base stealer to make this a real threat to the opposition. If he keeps hitting like he is, the consensus seems to be that he will end the year in Portland. He is projected to hit for decent power, but it has yet to really emerge (3 HRs in his 84 PAs at High-A), though that is not surprising given how young he is for his level.

Guerra was highlighted in our top 11-15 prospects report. The 19-year old is projected as a defense-first shortstop, although he may not be totally inept with the bat. If his hitting develops as he progresses through the minor leagues he will be an everyday shortstop in the big leagues, otherwise he destined for more of a utility role. So far this year he is hitting .318/.348/.545 in just 24 PAs but is striking out a lot (29.2 K%). He is still very young so his approach at the plate will continue to develop. With Xander Bogaerts already starting for the big league club, Deven Marrero at Triple-A and Guerra in Low-A the Red Sox appear to have a decent group of home-grown shortstop talent within the organization.

3 comments on “Fenway's Future: An Introduction”