With just eight sliders thrown this year, Rick Porcello is no longer the true six-pitch pitcher he was last season — and yet he’s employing a repertoire extensive enough to make even Trevor Bauer tip his cap. Porcello has thrown his four-seam more than 30% of the time for the first time in his career, his sinker about one-third of the time, and his cutter, curve and changeup around 10% of the time. As hitters have teed off on Porcello, who owns a 5.61 ERA after fourteen starts, slugging percentages against his pitches tell an interesting story:

Of the two pitches he’s thrown most, the four-seamer has taken a significant step forward in 2015. The sinker has worked almost exactly as well, and of the four sliders hit in play, opponents collected just one base. Hitters have had a bit more luck with Porcello’s curveball this year, but a difference of 60 points in slugging isn’t much to lose sleep over, not with just 201 curves thrown this year and an opponents’ whiff rate on the pitch that has climbed from 20.8% in 2014 to 36.2% so far this season.

Things have turned a little sour for Porcello’s cutter, on the other hand, which is still pretty new to his repertoire. He threw the pitch for the first time in 2014, 4.5% of the time overall. That’s up to 10.0% of the time this season, but it’s not like he’s been throwing it more and more — once he introduced it in August 2014, he threw it 10.2% and 16.7% of the time in that season’s final two months. He came out firing with it this season, throwing it 15.6% of the time in April — but he’s emphasized it much less since then, throwing it for 7.4% of his pitches in May and just 6.0% of the time so far in June. It hasn’t exactly been winning contests lately, but most of the damage done on Porcello’s cutter was done in April. Since then, hitters have only done about as much damage with it as they have with his other fastballs.

It’s Porcello’s changeup that may be the biggest difference maker. Even over just 122 thrown, the doubling of opponents’ slugging percentage against the change represents about 8 extra hits and 20 bases. If we use the performance of Porcello’s changeup in 2014 as a baseline, the pitch is responsible for maybe 6 or 7 extra runs this season. That would be enough to switch out Porcello’s 5.61 ERA for something with a four in front of it.

In other words, Porcello’s changeup isn’t solely responsible for what has so far been a mediocre season — but it’s a very big part of it. And although his four-seam fastball is probably the greatest, latest thorn in Porcello’s side, unlike other elements of his repertoire, the changeup has remained a problem. The problem is not small, as Porcello’s change was a huge part of his success dating from the great Detroit changeup renaissance in 2013 up through much of 2014. In the first half of 2014, opponents slugged under .200 against the pitch.

Porcello’s changeup isn’t responsible for what has so far been a mediocre season — but it’s a very big part of it.

The usage of a changeup can tell us a lot about how hitters have responded to it, even without looking at results. No matter how hard it is to pick up, we’re unlikely to see any change used more than 20%-22% of the time (or, maybe, 25% in a particular start). If you’re successful at forcing a hitter to guess fastball or change, you want him to be wrong more on the change. If a pitcher is throwing it infrequently, though, it might only be effective in the way that an eephus is effective — the element of surprise.

Porcello has thrown 9.0% changeups this year after throwing them 13.5% of the time in 2014. That looks pretty odd, but it’s not a hybrid. In both seasons, he’s thrown it less than 4% of the time against right-handed hitters — a “hey, why not” percentage that suggests hitters can pick it up early. Most of Porcello’s changeups are thrown against left-handed hitters, 13.2% of the time in 2015 and 20.03% in 2014. Last year, Porcello used his change against lefties about as often as we’d expect if hitters were having trouble picking it up — as if they were guessing. Porcello’s 2014 changeup wasn’t in either category — it was in both.

Not so this year. Combine the 13.2% usage with the rise in slugging percentage, and it sure looks like hitters have been teaching Porcello that at least much of the time, they’re not merely guessing when they swing at his changeup. They haven’t seem surprised, and as yardsticks go,“did Aaron Hicks hit a home run off of it” seems to say a lot. Hicks did, too, hitting a Porcello change almost 400 feet on May 27.

From that clip, it sounds a whole hell of a lot like Aaron Hicks was able to recognize the pitch while it was on its way to the plate. Doubling up on the change can be effective, as Porcello learned from Anibal Sanchez — but probably only if they’re guessing. If a changeup’s success stems from the element of surprise, it probably helps to not throw it more than once to any hitter — especially if it tends to be that first pitch that teaches hitters they can recognize it.

Porcello is averaging 3.66 pitches per plate appearance this season (almost exactly the same as 2014). See a hitter three times in a game, and he may see more than ten pitches. One side effect of throwing the change primarily to lefties: if hitters see any changeups, they tend to see multiple changeups. MLBAM seems to have missed three pitches tagged as changeups by Pitch Info, but of the 119 changeups listed at Baseball Savant, nearly half — 59 — were not the first changeup thrown to a particular hitter in a particular game.

20 of those 49 repeat changeups were balls, with no harm, and no foul. There have been plenty of those other things, though: 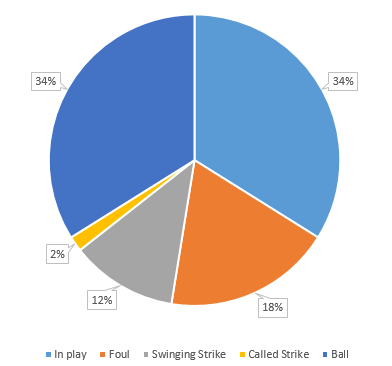 That’s an 18% whiff rate, which really isn’t bad. It’s not so much that hitters have made contact when seeing the changeup more than once in a game; it’s that they’ve swung at nearly all of them, other than the ones called balls (don’t feel bad for Clint Robinson, the only hitter to take one of these repeat changeups for a strike — he tripled later in the at bat). And no, the swing rate isn’t a function of a high proportion of the repeat changeups being thrown in two-strike counts (just 13 of 59). This is not the result of a pitch that hitters are forced to swing at, but it is exactly what we’d expect to see if most hitters were able to recognize the changeup quickly.

There doesn’t appear to be any change in the data in terms of release point, although he could be tipping the pitch in some way I couldn’t make out. It’s not like the quality of the pitch has completely deteriorated in terms of movement, either — he’s traded just over an inch of sink for a bit of run, but the difference is not large, and it tracks changes to Porcello’s sinker, as well. I don’t want to dismiss that possibility, but note that the whole idea seems to be that the change will play off the sinker — Porcello’s pitch frequencies are very similar against lefties and righties, with the extra changeups mostly just reducing the number of sinkers.

The most likely explanation may be that Porcello’s changeup was a casualty of the phenomenon that Alex Skillin explored here last month: pitching higher in the zone more much more frequently. Porcello’s Zone Percentage hasn’t changed a whole lot. According to the BP statistics, he’s thrown 49.6% of pitches in the zone, down from 51.5% in 2014 but well in line with 49.2% in 2013 and 49.7% in 2012. As he’s pitched higher, however, he’s thrown less frequently out of the zone to his arm side, in on righties and away from lefties. That has meant setting up a new camp for the change when facing lefties: below the plate. 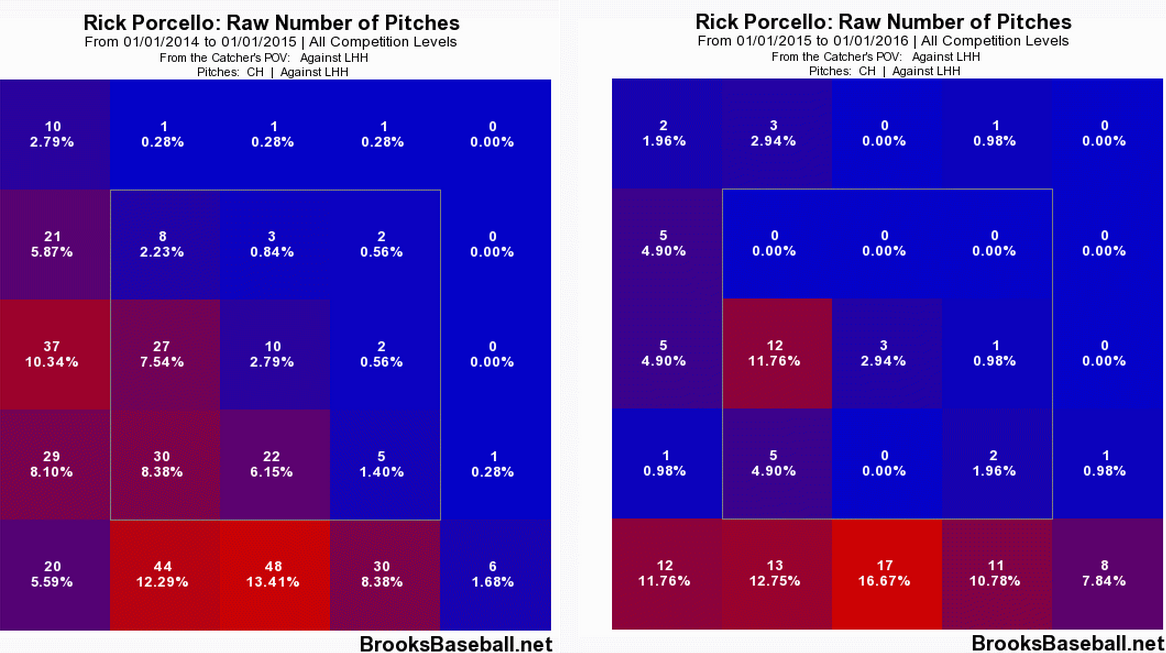 It sure seems like there’s a relationship here, but it could go both ways. Porcello may be trying to put more changeups down to avoid good contact because it’s been punished this year. But if there’s a relationship, it might also go the other way — it may also have made it easier for hitters to pick up on the pitch. Compare the change in changeup location to the location for his fastballs, also against lefties: 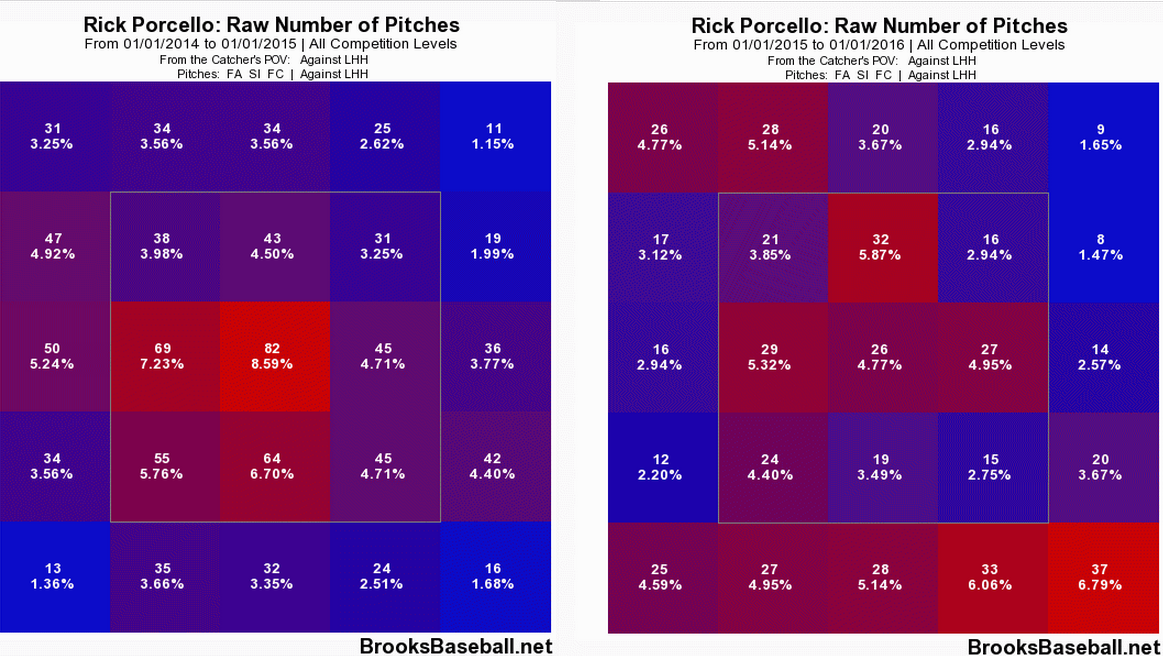 No matter the cause, it seems that opponents have gotten wise to Porcello’s changeup in some way. Some kind of shift in strategy seems necessary, especially as Porcello has racheted up his changeup usage against lefties in June so far. It’s possible that that adjustment could be as simple as reclaiming the area off the plate away versus lefties, or of finding and eliminating some way in which Porcello is tipping the pitch. If not, the solution could be even simpler: throwing it no more frequently than he already does against righties.

Tags: Rick Porcello |
Ryan P. Morrison
Follow @@ryanpmorrison
Ryan P. Morrison is a co-author of Inside the 'Zona, and may have been the first person to suggest moving Hanley Ramirez to first base. You can thank him later.
read more from Ryan P. Morrison

Ryan – seems all the Red Sox pitchers have been damaged by two factors they can’t control – poor fielding (all with lower FIPs) particularly Sandoval and Ramirez; and catching. Losing Hanigan and Vasquez for Swihart/Leon has to cost them big time on game calling and pitch framing. Big or small influences on the poor staff performance so far?