Sandy Leon. That’s the hook. I have you now.

This Red Sox season has been an odd one. Jackie Bradley is an excellent hitter but his defense has taken a step back. Weird. David Ortiz is 40 and better than ever. Huh? David Price has been bad, but somehow really good too. What? But nowhere in this bizarre spin-cycle of a season has there been anything as strange as Sandy Leon.

As I write this, we’re days from the trade deadline and the Red Sox are done unless they’re not. Dave Dombrowski is in charge and, supreme mover and shaker that he is, nobody is safe. Perhaps one of them most intriguing names on the market is that of Jonathan Lucroy. Lucroy is a catcher for the Brewers and brings an exciting group of skills including power, on-base ability and pitch framing. He’s perhaps the one player that makes the most sense for the Red Sox given where they are in the rotation (mostly full), the outfield (returning to health), and the infield (good to go). So, when you consider Blake Swihart’s injury and Christian Vazquez’s complete inability to hit, getting Lucroy makes sense. Except, there is Sandy Leon.

The first 17 players on the list of most valuable catchers per WAR have over 140 plate appearances. In truth, most have more than 300. But all of them have over 140, that is, until you get to the 18th spot. The player in the 18th spot has 93 plate appearances (before yesterday’s game). In those 93 PAs, he has 33 hits including 10 doubles, a triple, and three homers. That player is, of course, Sandy Leon, and that list is of the most valuable catchers in baseball by our metrics here at BP. I’d be remiss if I didn’t point out that our metrics treat Leon somewhat roughly, relatively speaking. By FanGraphs WAR, Leon has been the sixth best catcher in baseball. SIXTH! Steven Vogt, Brian McCann, Yasmani Grandal, and Matt Wieters are just some of the catchers that Leon has out-performed this year, which is silly in and of itself, but I want to draw your attention to the part that is extremely nuts. It’s not that Leon has been better than them. He has, but that’s not the point. It’s that he’s been better than them in about a third of the opportunities to be better than them. That’s extremely nuts!

It is on a couple different levels, too. It’s crazy because it’s just crazy. But it’s crazy because Leon was a forgotten player… I was going to say last year, but he was a forgotten player this year! After Vazquez’s injury last season, the team picked up Leon from Washington because that’s who they could get for basically nothing. Do you know who the Red Sox traded for Leon? I looked it up because I couldn’t remember either. The answer: nobody. They bought him for “cash considerations.” Incidentally that’s how I pay for my pizza. The Nationals thought so little of Leon that he wasn’t even worth a player, any player. The Red Sox thought so little of him that they DFA’d him one year ago (July 20, 2015).

To be fair to the Red Sox though, he was kinda terrible. So that’s the other thing that makes this all so weird. Leon has been excellent, amazing in fact, but he’s come out of nowhere to do it. He was literally cut loose by two organizations, and the second time nobody cared enough to bother with him, which is why he’s still on the Boston Red Sox. So then he comes into this season fourth on Boston’s catcher depth chart behind Swihart, Vazquez, and Ryan Hanigan in whatever order you want, and [flash forward four months] he’s not just the starter, he’s one of the best catchers in the sport.

So how in the heck, right? Well, let’s acknowledge that some of this is good fortune. You don’t sustain a .469 BABIP in the majors regardless of how many line drives you hit, or how much you barrel up the ball. Major league pitchers are too good. But this isn’t all luck, right? We’ve all seen Leon hit ball after ball on the screws. This can’t just be the baseball gods favoring a down and out player for a few months. Leon isn’t the best catcher in baseball, saying that much seems fair, but his success deserves the benefit of the doubt. So let’s see if we can figure it out.

First, look at this graph. 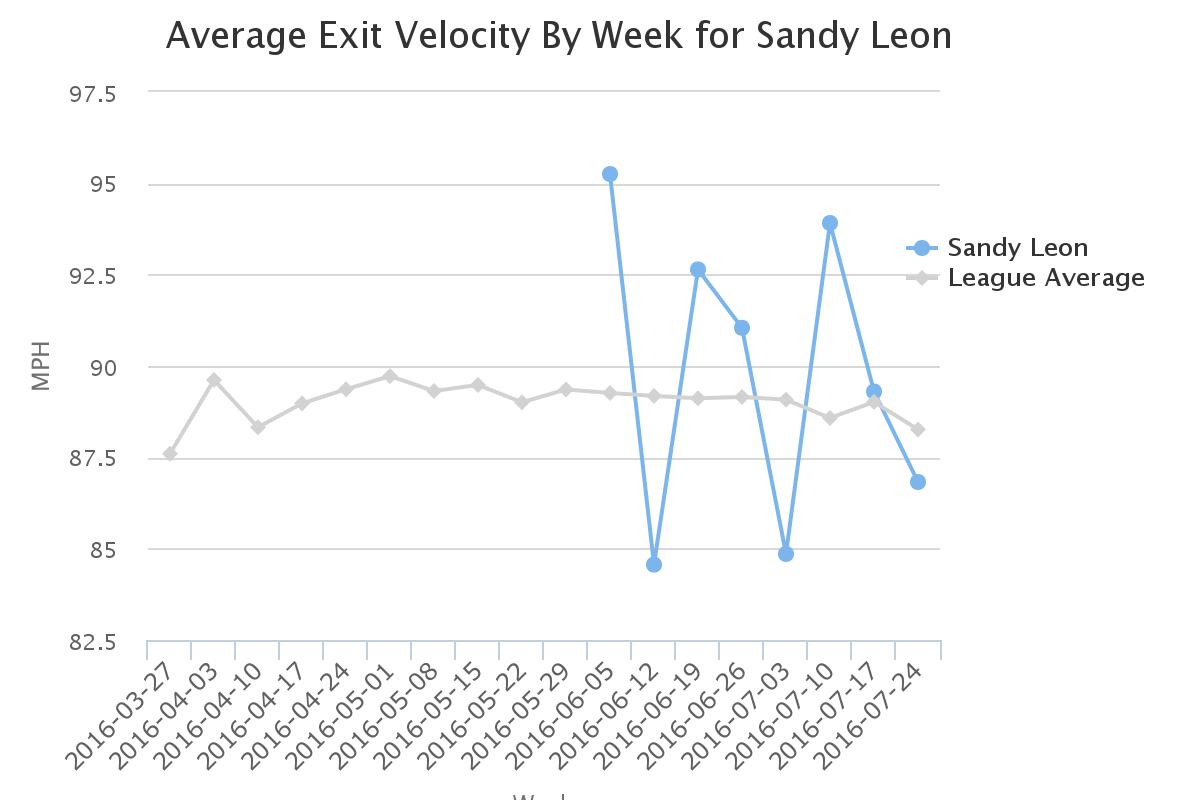 This is Sandy Leon’s exit velocity. The light blue is Leon, the gray line is the league average. It’s a weekly graph so it would fluctuate, but you can see how Leon has been, as John Farrell would say, impacting the ball. He’s been impacting the heck out of the ball, in fact. According to FanGraphs, 32.4 percent of his balls in play have been hard hit. For context, Mookie Betts is at 35.3 percent and Dustin Pedroia is at 32 percent. But it should be noted that 48.5 percent of Leon’s hits have been hard enough to be categorized as “medium hard.” That means that of the balls he puts into play, about 80 percent have a good shot to fall for a hit.

So that all sounds great, right? Here’s the bad news: the league average of Hard Hit plus Medium Hits is also 80 percent. Leon sprays the ball around, but his batted ball profile shows him as a very average hitter. So we’re back to Leon’s .469 BABIP, his unimpressive walk rate (six percent) and mediocre strikeout-to-walk ratio (3:1). I hate to end this on a buzz-killing note but I don’t think there’s any way Sandy Leon is this good, or is someone the Red Sox can count on as a star player going forward. If they can get Jonathan Lucroy for a reasonable package, they should, and they shouldn’t let Sandy Leon stand in their way.

However, this article isn’t finished. That’s because what Leon has done so far is, at the very least, put himself in the position to be a league average catcher going forward, or possibly even a little bit better if there is something in his performance that is more sustainable than I’m supposing here. As we’ve seen this season, league average players can be extremely valuable. Just imagine, for example, if the Red Sox had two more league average starters this season. They’d have a bunch more wins and they’d still have Anderson Espinosa. League average players are valuable. Sandy Leon, even if he’s not the best catcher in baseball, is very valuable.

Sandy Leon isn’t the best catcher in baseball, even if he’s made a case for it in the small sample of opportunities he’s been given this season. If the Red Sox can improve the position by adding a star like Lucroy, they should do so and not look back. But Leon has absolutely proven that he can be a major league catcher, even if he doesn’t have the baseball gods so solidly on his side, and considering where he’s been as recently as last season, that just might be the strangest story in a very strange Red Sox season.

BTW Tom Brady was 4th on the depth chart once. Mentioning that just in case one day Sandy Leon becomes the greatest of all time.