Now imagine a better Mookie Betts. It’s hard, right? He’s so good now that it’s nearly impossible to see a better version unless he morphs into Mike Trout. It might be hard to imagine, but a better Betts might soon be a reality. Yes, he’s only 23, and he’ll have room to grow, that much is obvious. Most young players will get better, the sky is blue, water is wet, etc. With Mookie, there’s a precedent set. He’s doing a lot of things that are indicative of an all-around breakout soon, not just in the power department like what he’s doing in his current tear.

It might not be one of his most notable skills, but Mookie has a really good eye and feel for the strike zone. He knows what’s a strike and what’s not, generally. What might betray that observation is a paltry 5.9% walk rate. In a vacuum, that’s not all that great. Thankfully, that isn’t isolated, and there’s a good reason for it. Pitchers are throwing him pitches in the zone 51 percent of the time. The reason Mookie’s not walking a lot is because he doesn’t have to. He gets hits instead. 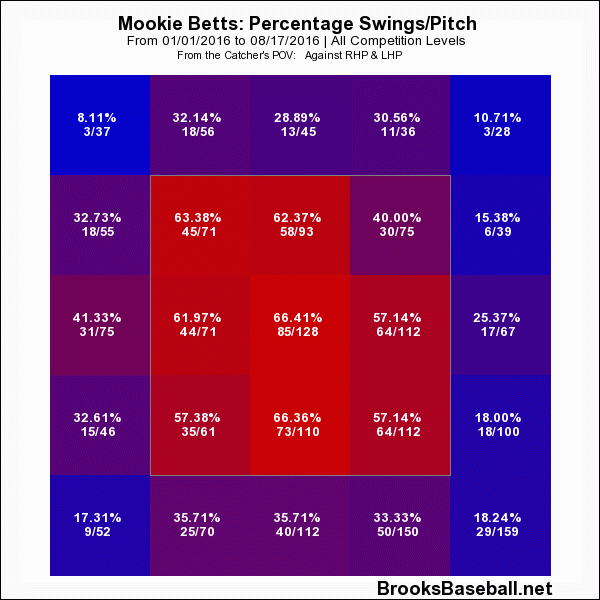 Now that is beautiful. He knows where his bread is buttered, that’s for sure. On top of that, he only swings at stuff outside the zone 25 percent of the time. Overall, he swings at 41 percent rate. He is incredibly efficient when he decides to let loose, and as you can expect, both of those percentages are well above league average. Mookie’s discipline at the plate is to die for.

The thing is, why are pitchers still throwing in the zone so often to a guy who already has 28 homers? They feed him a steady diet of fastballs and sliders, mostly, but he slams fastballs and lays off sliders that drift outside the zone. A player with that much power should not be seeing 51% of pitches in the zone, especially with the plate coverage we see above. Hell, Mike Trout doesn’t even see 50% in the zone, much less 45%.

An adjustment is coming. There’s no way it isn’t. But since Mookie’s discipline at the plate is stellar, this could very well be a boon to him. Players with a lot of power and a great feel for the strike zone will see their walk rates spike, and soon enough, the rest of their skillset will come along for the ride.

Looking at the Baseball Prospectus Annual for 2016, they give Mookie a trio of comparables. One stands out above the rest, because what’ll happen to Mookie happened to him: it’s Grady Sizemore.

Just take a look at how similar their first full seasons in the majors were. It’s stunning.

Apart from the strikeout rates, you couldn’t get much closer if you tried. So how did pitchers react to Sizemore being good? They tried to get a pitch by him early and get him to swing at junk late in a count in 2006. Sizemore, however, didn’t budge on his discipline, and nearly all of his contact stats stayed the same. His walk rate, however, didn’t. It exploded.

Now, Mookie isn’t going to walk as much this year as Sizemore did, seeing as he’s more contact-oriented. But you can bet that pitchers are trying the same thing – getting ahead of him early and having him swing at stuff outside the zone afterwards. Mookie isn’t falling for it either.

This is where Mookie might start pulling away from Sizemore as a comp. He doesn’t take as many pitches, but he makes so much damage on contact that it doesn’t matter. But the breakout was similar – they started punishing pitches in the zone and ignored everything else.

What happened after 2006 for Sizemore? Well, by WARP, he went on to have his best season ever, cranking out 6.1 WARP in 2007, and then went 30-30 in 2008 before his legs gave out on him. While I’m definitely not betting on chronic leg injuries for Mookie, it’s not hard to see him posting crooked WARP numbers in the next few years. This is where the comp starts to fail you a bit, because Mookie’s hitting for more power and walking less, but that why a comp is a comp – no two players are exactly alike. He could be better than Sizemore’s peak with a lot more longevity, and as outlandish at that might sound, the peripherals suggest that it’s very likely.

It’s scary to think the best player on the team could conceivably get even better than what we’re seeing now. But that’s how it is with Betts. He’s that good, he’s got the numbers to prove it, and the metrics to back it all up. Oh, and another comp BP2016 gave Mookie? Andrew McCutchen. Think about that the next time you see him smash two home runs, because he could be that – and more.