I was staring at my phone while walking in public the other day when I ran across this gem:

As an aside, I'm all set with Jackie Bradley Jr. As a 4th outfielder and defensive replacement? Sure. But any desire to put him out their regularly should be reassessed 5 minutes ago

If Rule Number One of Twitter is Never Tweet, Rule Number Two is Don’t Get Mad At Dumb Sports Tweets. I am not good at following either of those — that’s my cross to bear — but good grief this tweet sucks extremely hard.

JBJ’s is in his sixth year at the MLB-level, and at this point, we know what kind of hitter he is. Sure, hitting .178/.264/.271 through the first 30-something games of the season looks bad. It is bad. But you know why it doesn’t really matter?

JBJ makes these plays with remarkable regularity. On any given night, there’s not a centerfielder in baseball with better odds at ending up on the 11 pm SportsCenter.

I’d love it if JBJ was a good hitter. When he is hitting, there aren’t many more complete players in baseball. With that said, the idea that he’s going to put it together finally and slash something like .310/.360/.534 should be buried deep, deep in the dirt and left there for good.

At 28, what we’re seeing is what we’re going to get. A piece about aging curves in baseball was published in the Hardball Times back in 2009, and take a look at what they found: 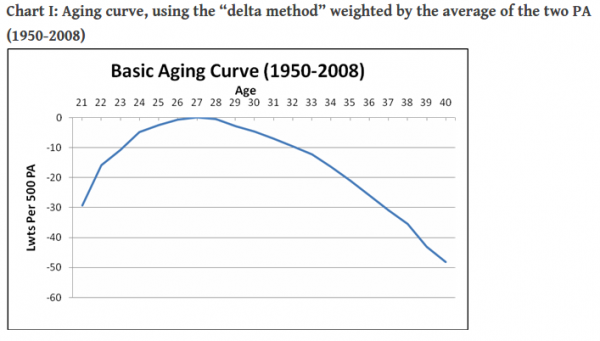 Granted, this study was released almost a decade ago, but I’d bet the results aren’t that much different today. Essentially, JBJ is currently in the middle of what should be his career’s peak. Being one of the worst hitters in baseball during what is supposed to be a peak season is frustrating, but JBJ’s just as likely to play at an MVP level over the next 30 games as he is continue this slump. That’s what he’s done, that’s what he’s doing, and that’s what he’s going to do. Besides, none of that really matters because of this:

The Red Sox don’t need JBJ to hit in order to win. There are a half-dozen players on their 25-man roster whose offensive performance matters more. Of all Red Sox hitters who had at least 400 plate appearances in 2017, no one was worse offensively than Bradley was. Even with that being true, JBJ, by WAR, was the third-most valuable position player on the team. Why? Because of shenanigans like this:

Frustration with Bradley’s inconsistency is nothing new. Defending his streakiness isn’t exactly an analytic breakthrough either. But on deeply talented offensive team with 3-4 elite power hitters, it’s time to stop being frustrated that JBJ isn’t one of them.

He’s not a great hitter, but he’s not a 4th outfielder or defensive replacement. He’s a streaky hitter who carries his weight by making catches like this once a week:

And that should be enough.

He still has an option left. Can we at least send him down to Pawtucket for a “freshening”?