Welcome back to Fenway’s Future. This week we update you on Jackie Bradley Jr. – the International League All-Star – and, with Brian Johnson’s promotion to Boston, take a look at a pair of the starters that remain in the upper minors.

It’s officially the All-Star break. The fact that Jackie Bradley Jr. is still in Triple-A Pawtucket at this point is a surprise to few. However, it still feels weird including him on this list of prospects. Not much has changed for Bradley in his three years bouncing between Triple-A and the major leagues. He’s an elite outfielder no matter where he plays, showcasing outstanding range, a good arm and a knack for the highlight-reel catch. He has no trouble tearing up the International League, this season making its All-Star team after a first half in which he posted a .312 true average and a .386 wOBA through 59 games. But there still appears to be no place for him on Boston’s roster, thanks in large part to his deficiencies at the plate in the major leagues.

After a historically bad 2014, Bradley has seen just 14 games with the Red Sox this season. And as you might expect, the numbers are ugly. Compare the 25-year-old’s Triple A numbers to his .182 TAv and .214 wOBA in Boston and the contrast is unbelievable. The majors are supposed to be harder than the minor leagues. But with such a significant drop-off the Red Sox have clearly seen enough of JBJ to know that although he’s major-league ready – as he’s once again proven in the minors this season – he’s not quite an everyday major leaguer. It’s why they acquired Carlos Peguero and eventually Alejandro De Aza as outfield depth depleted rather than give Bradley regular time in Boston. It’s fair to wonder in Bradley will ever be an everyday outfielder for the Red Sox again, or if he’ll at least be given the opportunity to try to become one again.

On Saturday, Brian Johnson became the second notable Red Sox pitching prospect to be called up from the minor leagues, following in the footsteps of Eduardo Rodriguez. Clay Buchholz’s history with longer-than-expected trips to the disabled list leads me to believe that Johnson won’t be sent back down anytime soon. That leaves the PawSox with a much different looking starting rotation – headlined by Henry Owens – than it did at the beginning of the season. One player who’s been a mainstay on that staff is right-hander Keith Couch. Couch is your typical contact pitcher, depending primarily on a low-90s sinker to get ground ball outs rather than overpowering hitters. A 2010 13th-round pick out of Adelphi University, Couch has experienced moderate success in his first season in Triple-A. He owns a 4.47 FIP through 18 games and ended his first half Saturday with a decent two-run, nine-hit, three-strikeout outing over six innings in a PawSox win.

Couch’s highlight in 2015 is a June 23 start in which he took a no-hitter into the seventh before giving up a pair of runs. Overall he’s remained consistent for most of the season, but is susceptible to getting shelled when he’s not keeping his pitches down. Triple-A is still new territory for Couch. If he can put up more consistently effective efforts in time he could become a solid depth arm.

Building on the theme of starters in the upper minors looking to further develop and prove themselves, let’s take a look at how Luis Diaz has done in his first full season with Double-A Portland. Like Couch, Diaz doesn’t possess overwhelming velocity, but does get his share of strikeouts. The 23-year-old Venezuelan has seen a drop-off statistically this season, owning a 5.99 ERA, 4.34 FIP and 6.53 K/9 through 17 starts, but has improved as the season’s continued and is throwing the best he has all year. Diaz has tossed a quality start in four of his last five outings despite his success not being reflected in the win-loss column. He’s had just two truly bad outings this season – both in May – and if nothing else is dependable enough to give innings and keep his team in games. Those qualities alone, along with average potential on his changeup and slider, could be enough to carry him further through the organization. 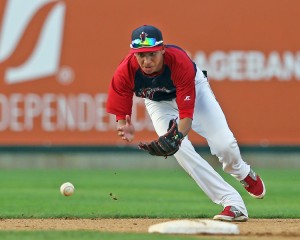 Much has changed for Mauricio Dubon since he was last featured in this series. At that time Dubon was rolling offensively in Low-A Greenville and succeeding as both a shortstop and second baseman. Since then Dubon’s been promoted to High-A Salem, survived a weeklong slump at the plate and is further expanding upon his versatility as a fielder. The 20-year-old from Honduras went 2-for-25 in his first seven games in Salem, but after a two-hit effort Sunday has hits in six of the last seven games, raising his TAv to a still underwhelming .144 through 14 games. Neither the slow start nor the recent surge is a shock for Dubon, who’s been a streaky hitter throughout the season. He’s shown that once he starts making steady contact and finds the gaps he can be a tough out. That success should become transparent once he limits his strikeouts; his K% in High-A ballooned to 19 percent after striking out three times Saturday.

What’s most notable about Dubon is not his bat, but his ever-versatile glove. Along with second and shortstop, Dubon is also seeing time at third base and having little trouble with the adjustment. This could be the start of an eventual career as a utility player in the major leagues. Dubon can already play three infield positions effectively. With plus speed and arm strength, it’s not unrealistic to think he could also dabble in the outfield if needed. That will be especially useful as he moves up throughout the organization. His bat isn’t consistent enough to take him far, but being thrown into new positions could be in the best interest of his career. 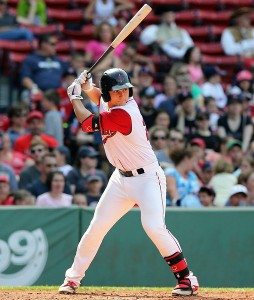 The only player in Low-A Greenville who can come close to Yoan Moncada’s run at the plate right now is Nick Longhi. The 19-year-old rode a five-game hitting streak into Monday after going 4-for-5 with four singles the day before, and since returning from the South Atlantic League All-Star break is hitting .345 (20-for-58) over 16 games. This hot streak continues what has been tremendous success for Longhi, who was drafted by the Sox out of high school in the 3oth round of the 2014 draft, and who owns a .277 TAv this season. He has yet show much power-hitting ability, but he makes hard contact with the ball and that could one day translate into average power once he develops physically. Longhi is also versatile with the glove. This season he’s split time between right field and first base, meeting regular success at both positions.

Michael Kopech is a player who’s been written about at length on this site (both here and here). And as the season’s progressed he’s continued to justify the decision to keep dissecting his potential. If you read BP Boston – or any publication that writes about Red Sox prospects regularly – you know by now that Kopech is a hard-throwing pitcher with a high ceiling who has been near-dominant for Greenville this season. That’s only continued over his last six starts as the 2014 first-round pick has allowed a total of six earned runs, shrinking his ERA to 2.63 this season. On Sunday Kopech needed three double plays in order to escape with a shutout over five innings, but succeeded nonetheless. As a 19-year-old whose fastball tops out at 98 miles per hour, Kopech has little trouble striking out batters in the low minors. But, like many 19-year-old flamethrowers, Kopech’s command still has a long way to go. His 3.94 BB/9 is a respectable, and much improved, mark, but nine walks over his last two starts serves as a reminder that it’s not fully polished. With that said, good coaching and time to mature and develop should aid his command as he climbs the organization.