Joe Kelly makes his second start of the season tonight against the Orioles.

Last Friday night, Kelly was building momentum. Through three innings in Toronto, facing the league’s most powerful offense in hitter-friendly Rogers Centre, he’d recorded four strikeouts and allowed just one run. Go back further and Kelly had six solid starts in spring training, posting a 2.63 ERA with 22 strikeouts and eight walks. Go back even further and Kelly had a fine second half in 2015, notching a 3.77 ERA and a 2.78 strikeout-to-walk ratio.

Then the fourth inning happened. Kelly faced six batters without recording an out, quickly erasing those positive feelings you were developing toward the righty. “Hey, this guy might be alright after all,” you were probably thinking, only to have your hopes dashed by a string of hard-hit singles, a hit-by-pitch, and a 387-foot Josh Donaldson exclamation point.

What went wrong with Kelly, as it often does, was his command—the stuff’s great, of course. Though the results were solid in innings one through three, much of his early success on Friday night could be classified as a mirage. Kelly threw a first pitch strike to nine of 14 batters in those innings, but during the 12 at-bats that went at least three pitches, he was ahead in the count (after pitch three) in just four of them. He was consistently falling behind against a good offense, and when that happens bad things are bound to happen. In the fourth inning, another bout of Kelly’s wildness caught up to him, as the Jays finally made him pay for missing his spots.

I examined Kelly’s outing on Friday night and classified each pitch into a bucket based on whether Kelly hit catcher Ryan Hanigan’s target or not—let’s call it command percentage.

Kelly started off with poor command and it trended downhill toward the end of his outing. In the third and fourth innings, Kelly hit his target just 22 percent of the time. In those two innings, just 15 percent of his fastballs went to Hanigan’s target. Without establishing the fastball early in the count, Kelly couldn’t stay ahead of hitters—and it’s not like his breaking pitches are of the get-me-over variety.

Whenever Hanigan called for a fastball up in zone, Kelly delivered one so far up that it served little purpose other than to put Toronto’s hitters in better counts—the up-and-in fastball that glazed off Kevin Pillar’s helmet being the most extreme example. Further, whenever Hanigan called for a slider down in the zone, Kelly threw a pitch so low that Jays hitters rarely offered at it, particularly when they were ahead in the count. In the end, Kelly’s struggle to get ahead in the count forced him more toward the heart of the plate, and that’s when Toronto did its damage.

Hanigan wanted the pitch on the outside edge, but instead it leaked over the inner half allowing Martin to redirect it back at Kelley. Next up, here’s a first-pitch 96 mph two-seamer to the following batter, Ryan Goins:

Hanigan wants this fastball up, and he comes out of the crouch to exaggerate that desire. This time Kelly’s fastball ends up belt high and out over the plate, and Goins promptly rips it into center field to load the bases. After falling behind 2-0 with two sliders to the next batter, Darwin Barney, here’s what happened on pitch No. 3:

Hey, look, it’s a carbon copy of the first image. Again, Hanigan is set up on the outside edge of the plate, and again Kelly’s two-seamer ends up on the inner half, right in Barney’s wheelhouse, to the extent that Barney has a wheelhouse. We could go on, of course, and we will. Just one more.

Perhaps the most amusing (or disheartening) example of Kelly’s lack of command came in the third inning against Edwin Encarnacion, where Hanigan set up in the same spot—I mean, pretty much exactly the same spot—for six straight fastballs. Kelly came close to hitting the glove once: 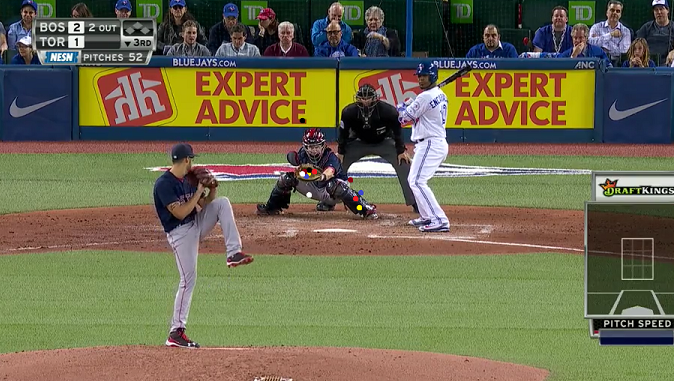 The cluster of colored dots around Hanigan’s glove represent the approximate area where he set up on each pitch of the at-bat, and the dots of corresponding colors scattered all over represent the approximate area where each pitch ended up. On Kelly’s sixth and final try against Encarnacion (the white dots) he finally entered the vicinity of Hanigan’s target, but the rest of his efforts all missed by significant margins, one high and four others low and/or inside. He was probably lucky to escape with a walk.

Kelly’s maddening because he throws hard and—all joking aside—appears to have solid stuff. It’s just that most of the time he doesn’t have the ability to execute any type of consistent game plan. When the stuff is on, the command is off. When the stuff is off, forget it. There’s still hope Kelly can improve because he’s relatively young and he’s put up solid results in the past, but each passing disastrous start adds to a mounting pile of evidence that says maybe he just isn’t going to put it all together.

2 comments on “The Limitations of Joe Kelly’s Great Stuff”